Yes, this post is about the dreaded door zone.  How wide does a bike lane next to parked cars have to be to be safe?

The relevant measurement is the combined width of the bike lane and parking area.  That determines how much space is available between the parked cars and the left edge of the bike lane.

On county projects, I’ve been insisting on a minimum combined bike lane/parking width of 14 feet when car speeds are not too fast.  The logic is pretty simple.  Properly parked cars with left-side doors open take up 10 to 11 feet of pavement in most cases.  Most mountain bikes or hybrids are 2 feet wide at the handlebars.  Add to that a foot of clearance and it all adds up to at 14 feet.

This matches my impressions when I’m on the bike.  If 13 feet is available (on Battery Lane in Bethesda for example), I feel I have to ride almost on the white line at the left edge of the bike lane (like the rider below) to avoid potentially opening doors.  That puts me where overtaking vehicles come too close to me.  Even 14′ doesn’t leave much margin for error. A better expression of bike lane requirements would be 14 feet minimum, 15 desired. 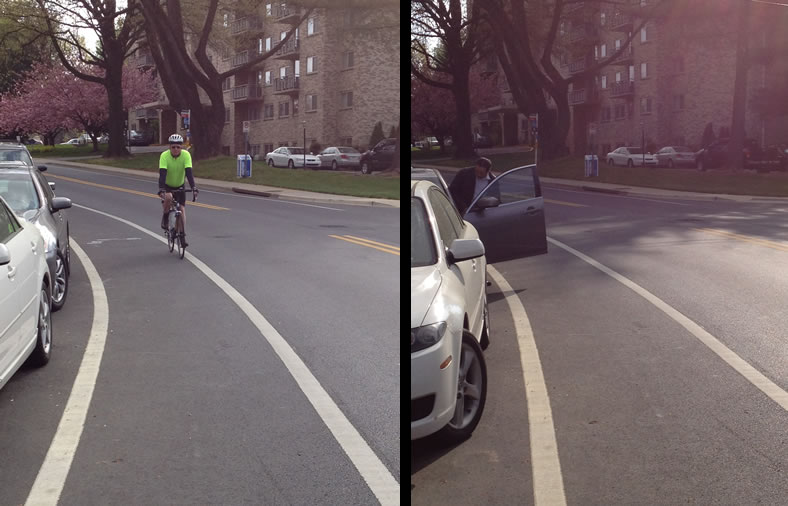 See this sampling of bike lane/parking widths around the county.

My small Mazda hatchback extends about 10 feet from the curb with the door open.  My family’s aging Honda minivan extends a full 10’9” from the curb.  My measurements assume the car tires are 12 inches from the curb, as Maryland law requires.  This seems to agree with bike advocate John S. Allen’s car width data on his website (note that his numbers put the car 6 inches from the curb).   It would be nice to see a study of door zone widths on real streets, with percentiles given for each width.  Feel free to measure your own car’s door zone and submit it to me. 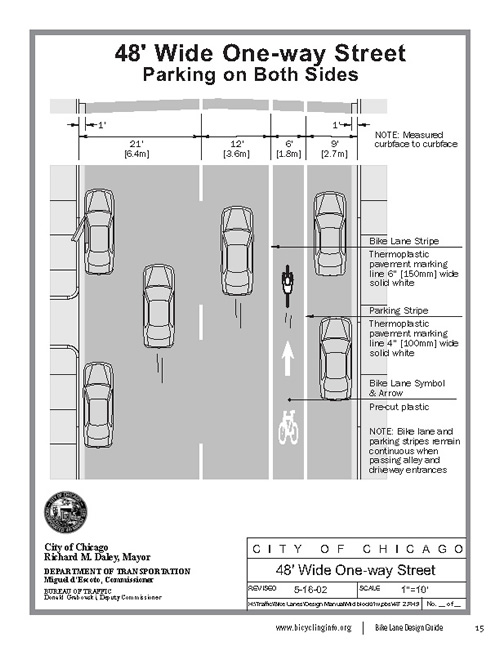 Needless to say, door zones represent a significant danger, as documented in various studies.   A member of the county committee tasked with determining roadway standards (including bike lane widths) was doored herself… while on the committee!  I once saw a car get doored in D.C. (ripping off the door).

Even with 14 foot combined bike lane/parking width, riders need to be encouraged to ride as far left as possible within the bike lane.  This can often be encouraged through pavement markings like these used in San Francisco.

The biblical 1999 AASHTO Guide for the Development of Bicycle Facilities recommends 13 or 14 foot combined bike lane/parking width where “parking volume is substantial or turnover is high”.  The recommendation of 13 feet is baffling given the math.  Fortunately AASHTO is developing a new version of its guide that promises to address bike lane issues next to parking.  Newer standards appear to be taking the car door problem more seriously.  The NACTO Urban Bikeway Design Guide states that the preferred bike lane + parking width is 14’6″, with 12 feet as an “absolute minimum”.

Unfortunately the 1999 AASHTO guide also states that “3.6 m (12 feet) of combined bicycle travel and parking width should be the minimum“.  The 12 foot number appears to represent the minimum distance needed for safe clearance from the car itself (with doors closed).  It’s okay for the standard to state that clearly, but the AASHTO guide’s language implies that 12 feet is a reasonable alternative next to parking whenever the “preferred” 14 feet isn’t possible (which is often).   Standards that cite the 12 foot minimum should make it clear that it’s a hard minimum and that it creates a dooring risk.

If, after all this, there are situations where door zone bike lanes are still to be used (or already exist), drivers and cyclists should be alerted to the danger of car doors with signs or pavement markings.

If 14 feet is not available for the bike lane + parking, I recommend sharrows as the preferable solution.  Maryland law requires cyclists to use bike lanes where they’re present, but riders can legally ignore sharrows.   So even if they’re painted unreasonably close to parked cars (Maryland standards call for them to be at least 11 feet from the curb, which puts cyclists in the door  zone again), cyclists are free to ignore them.  Sharrows give cyclists the discretion to ride where they feel it’s safest.   Sharrows ideally should be painted 12′ or 13′ from the curb when there’s parking.  Or they can be painted down the center of the right lane as seen on George Mason Drive in Arlington.  New ideas are being tried all the time.  Here is an interesting hybrid of a bike lane and a sharrow.

So my request to Montgomery County and the state: either 14 foot bike lanes next to parked cars or sharrows or sometimes no bike-specific markings at all.

7 Responses to “Bike lanes next to parking – how wide is wide enough?”