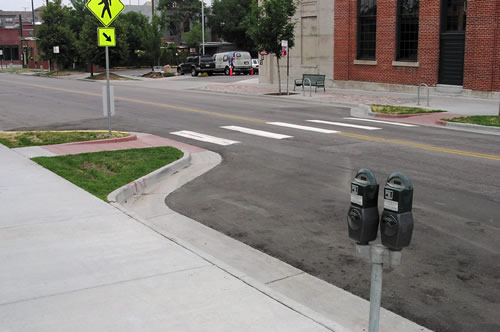 Curb extensions or “bumpouts” are a common method of calming traffic and shortening the street crossing distance for pedestrians.  The idea is that narrowing the roadway slows traffic by reducing the maximum safe speed as perceived by drivers.  Center islands serve a similar purpose.

Unfortunately bumpouts often obstruct the space to the right of the travel lanes that’s used by bicyclists.  It forces cyclists to wait for traffic before passing the obstruction.  Even worse, drivers may misjudge the distance or the width and try to beat a cyclist to the bumpout when it’s not safe to do so.  This seems especially likely when the shoulder narrows gradually instead of suddenly.  I was almost run off the road on Arcola Avenue once, where center islands are used in place of bumpouts and the shoulder tapers to nothing before each island.  The driver seemed intent on maintaining his speed,  even though I was reaching the gap before him.

The county has started implementing two types of bumpouts that let cyclists avoid or evade these structures:

1. Create ramps that let the cyclist ride up and over the bumpout.  This is the solution applied on Fairland Road west of Old Columbia Pike.  A variation of this uses a path that runs up onto the grassy area and back down, seen on Calverton Blvd.

Fairland Road "up and over" solution 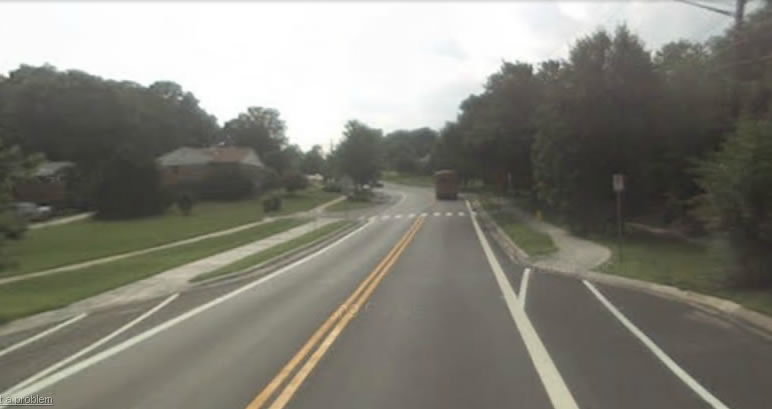 Calverton Blvd "up and over" (or "up and around") solution

2. Provide a street-level gap in the bumpout.  This turns the bumpout into an island.  Castle Boulevard off of Briggs Chaney Road uses this configuration. 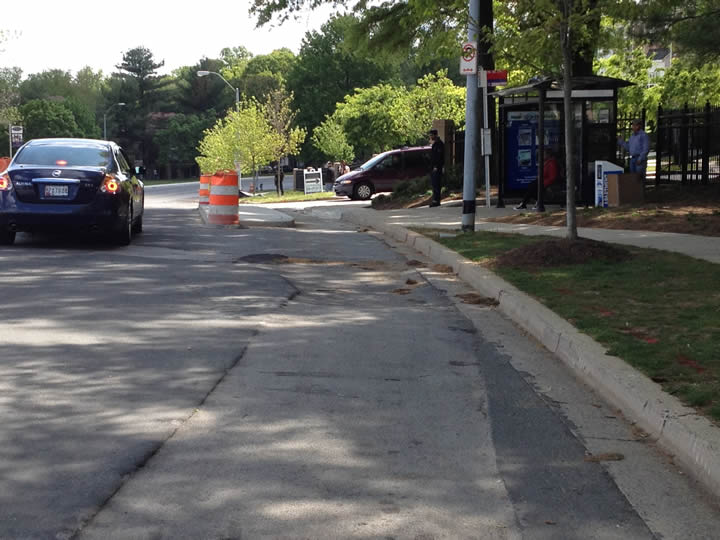 Castle Blvd slot next to bus stop and poor pavement

Below is a variation on the slot solution used when there are just posts instead of a concrete bumpout, as on Layhill Road.  The bike lane goes through the gap in the posts.  I kind of like this better than concrete bumpouts.

Layhill Road with posts instead of a bumpout. Bike lane goes through the gap.

Here are a few other possible solutions:

Can’t we just make the bumpouts smaller?  I realize that there are trade-offs between pedestrian safety and bicyclist safety, which may depend on many factors including the type of road, traffic speeds and the number of pedestrians and bicyclists.  Consider also that pedestrians can be put at risk by bicyclists riding over or through bumpouts.  Generally I think smaller bumpouts are the right solution whenever there are marked bike lanes or lots of bike traffic, like this:

But otherwise I slightly prefer the up-and-over configuration, though it’s not a strong preference.  A lot of it may depend on the context.

On the part of Fairland Road that I rode, the up-and-over ramps provided a smooth enough transition and I didn’t feel like I had to slow down too much.  And because the pavement was elevated, debris didn’t collect there.

But when riding on Castle Blvd I felt like I really had to slow down because I was riding through a narrow gap flanked by curbs on both sides.  I was especially unnerved by pedestrians standing on the sidewalk right next to the bumpout.  Anywhere there are lots of pedestrians, and especially where there are crosswalks, I could see people walking out into the bike slot without a clue.  It’s also not uncommon for bus stops to be located at crosswalks, so pedestrians might collect there (as I saw them do on Castle).  Fairland Road might have seemed misleadingly better in that regard because few pedestrians use that road.  Pedestrians might literally stand in the way on Fairland since the bike ramps look like sidewalks.

As for the details, the up-and-over solution as implemented on Fairland is also not very attractive and seems improvised.  There surely must be more appealing and more standard ways to implement it.  As for debris, the bumpout slots on Castle were relatively free of it, but it wasn’t easy to tell from a distance, and on many roads I could see this as being a real problem.

For whatever reason, parked cars in the shoulder don’t seem to be as hazardous as bumpouts.  I believe it’s easier for both drivers and cyclists to judge the distance to parked cars, and they really stand out.  I personally think drivers take some pity on cyclists who have a parked car in their way.  I’m often waved through by drivers.  But when the shoulder physically narrows, I swear drivers think it’s my fault.

Montgomery County DOT is looking to know if these designs are acceptable.  Opinions are welcome.

7 Responses to “Dealing with curb bumpouts”