Maryland SHA’s written guidance for use of these signs is in this three page document.  That document leaves a lot of gaps, but SHA’s traffic and safety director supplied more depth in an interview with Jim Titus of WABA.  For more from Jim, see his post on Greater Greater Washington.

SHA’s primary guidance states that BMUFL signs may be used on roads where the usable space for the cyclist in the right lane is 13 feet or narrower.  Usable means, for example, that gutters don’t count as part of the 13 feet (gutters are typically 12-16 inches wide).  According to SHA, 13 feet is the width at which motorists would have to cross a double-yellow line (or lane line) to pass a cyclist with the mandated 3 foot clearance.  It’s unclear whether SHA considers shoulders to be part of the usable width.  If they are, then BMUFL signs wouldn’t be posted if the road has bikeable shoulders.

Where there’s parallel parking, SHA says that the parking area is not to be considered as part of the usable width.  If there’s no physical line separating the travel lane from the parking area, then SHA treats the parking area as if it were 7-8 feet wide.  Initially SHA said it would treat everything to the left of this 7-8 feet as usable pavement for bikes.  But that assumes cyclists are willing to ride in the door zone.  So when there’s parallel parking, CycleMoco’s position is that the unusable area should be considered to be 12 feet wide (not 7 or 8), whether there’s a line or not.  That means we would expect BMUFL signs in a wide lane where parking is permitted even if the lane were 25′ wide.  SHA hasn’t been clear on whether they’re willing to interpret it this way.

It’s also unclear whether SHA is willing to use BMFUL signs on roads with sidepaths.  Certainly sidepaths should not make a difference.

Regardless of whether BMUFL signs are posted or not, cyclists may legally “take the lane” whenever they are “operating in a lane that is too narrow for a bicycle or motor scooter and another vehicle to travel safely side by side within the lane” and for several other reasons (see Maryland Code TR § 21-1205 per LexisNexis).  So the signs merely reinforce what’s already the law.  (Remember however that cyclists still have to use bike lanes if they are provided, with various exceptions, per Maryland Code TR § 21-1205.1 [a provision we’ve unsuccessfully tried to repeal] and cyclists are not allowed to use the travel lanes on roads with 50 mph or greater speed limit).

Maryland SHA has authorized the use of three different BMUFL signs:

R4-11 – The basic version, to be used at the beginning of road segments where bikes can use the whole lane  and at roughly half mile intervals thereafter (longer intervals in non-urban areas):

R4-11(1) – This version with “Notice” written at the top is for use at major jurisdictional boundaries such as state lines and the Baltimore city line: 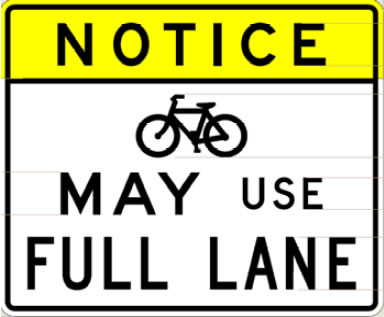 W16-1(3) – A warning sign (hence the yellow diamond) is ostensibly to be used where sharing the lane is more hazardous for cyclists.  In practice these will likely be used at pinch points, such a few hundred feet before passing lanes or right-turn lanes take away the bikeable shoulder: 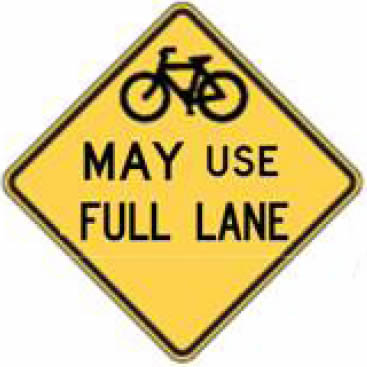 The old “Share the Road” warning sign may still be used on state roads where the lane is too wide for R4-11 (more than 13 feet of usable space) and has no adequate shoulder.  It’s called the W11-1 over W16-1P sign (two signs actually): 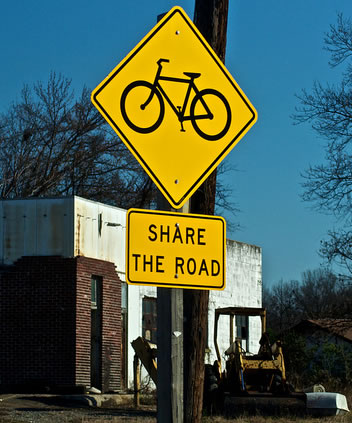 Most of these signs are identified in either Maryland’s Manual on Uniform Traffic Control Devices (MUTCD) or the federal MUTCD, in case you want to look them up.  See CycleMoco’s guide to standards documents for more than you ever wanted to know about bike standards.

Then there’s the T-shirt (not SHA standard): 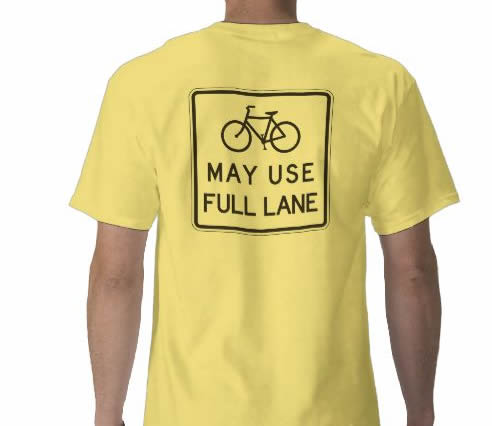 Let others know the law

In any case, SHA plans to raise awareness of the signs. Morning drive shows on WAMU, WTOP, and WMAL have aired stories about the first signs being posted in Prince George’s County.

Here are Montgomery County roads where SHA will install its first batch of Bikes May Use Full Lane signs (in one flavor or another).  Segment limits are subject to change.

US 29, Colesville Road, from New Hampshire Ave. to Georgia Ave.

MD 355, Wisconsin Avenue, from the DC line to Bradley Boulevard.

Individual counties, including Montgomery County, are developing their own BMUFL sign guidelines based on those of the state, as discussed here.

Incidentally I saw a bicyclist the other day who was hugging the curb instead of using the full lane, leading drivers to pass very close to the cyclist if not actually on top of him.  This was actually next to a Bikes May Use Full Lane sign.  Maybe there should be another sign: ”Bicycles Hug the Curb at Their Own Risk”.