Here is an overview map of the planned “Green Mile” sidewalk/sidepath along Rt. 355 (Wisconsin Ave.) in Chevy Chase.  This isn’t a redesign since the most recent CycleMoco post, just a clearer map showing the different sections.  Click to enlarge. 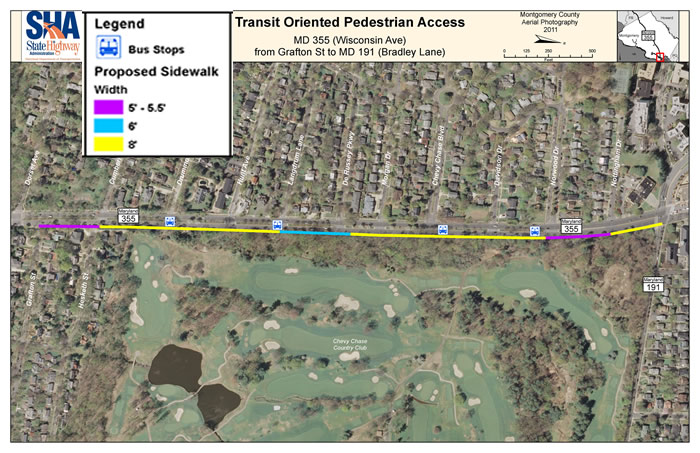 Segments are color-code to show their width

Here are the basics:

The exact cross-sections are shown in this schematic diagram.  A full description of the path, including detailed design drawings, can be found here.

Much of this facility is really just a sidewalk, not a shared use path.  Thus SHA is calling it a sidewalk (or pedestrian facility).  The facility is absolutely worth building for the sake of pedestrians and bicyclists,  since there is no sidewalk on the east side of Rt. 355 currently, and the sidewalk on the west side is consistently narrow and busy with pedestrians.  But it’s disappointing that cyclists using the new path will have to ride close to traffic and/or on such a narrow walkway.  The sections shown in magenta above will be fairly unsafe for inexperienced cyclists.  The path could potentially have been built further from the roadway in some spots, but the state did not reach out to the county to get more land in order to make that possible.  SHA also did not appear to solicit input from bike organizations on this project, and would benefit from improving its processes in that regard, notifying not just nearby neighborhoods but also countywide stakeholder groups.

Alternatively, cyclists can ride in the roadway, though it would be intimidating to many riders, especially during rush hour.  At least the road has new Bikes May Use Full Lane signs.