The quintessential Montgomery County plan for bicyclists is the 2005 Countywide Bikeways Functional Master Plan (CBFMP).  This plan says where the county plans to add major bikeways or has already implemented them.  Especially useful is the CBFMP’s table of table of existing and planned bikeways. 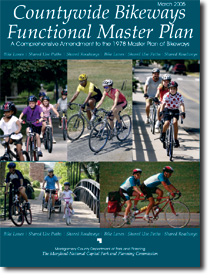 See also this interactive map for a visual companion to the CBFMP document.  The map includes updates made to the CBFMP since 2005 except for the most recent, as well as local bikeways (see below) though it’s not guaranteed to be 100% correct.

The CBFMP identifies these types of bikeways:

Two newer bikeway types, namely cycle tracks and buffered bike lanes, weren’t in use when the CBFMP was written, but may appear in CBFMP updates.

The CBFMP plan covers only “countywide” bikeways (bikeways of countywide significance), in other words major bikeways (regardless of length).  So-called “local” bikeways are bikeways of lesser significance and they’re identified only in local plans, not in the CBFMP.

The CBFMP is continuously modified as the county updates local master plans (such as sector plans).  The online and print copies of the CBFMP are frozen in time as of 2005, so to get the updates made since then I look in the latest local master plan for the area in question, if the local master plan was updated after 2005.  The local master plan will identify most if not all the planned bikeways (including local bikeways) for that local area including CBFMP changes.  You can also check quickly using the Planning Department’s interactive map which includes most of the updates (but not necessarily the most recent ones). To be certain what’s planned or to ask any questions about the plan, feel free to contact the Planning Department bike planner at 301-495-2191.

Independent cities can have their own bikeway plans.  Rockville has a superb bike plan written in 2004, which is now being updated.  Gaithersburg’s bike plan is in a state of flux.  The CBFMP does not cover these bikeways, but tries to show them on its maps.  For an accurate story within these jurisdictions, you need to look in the jurisdiction’s own bike plans.