There is an updated design of the “Green Mile” shared use path along MD 355 (Wisconsin Ave.) north of Friendship Heights.  The design isn’t final by any means, but it’s been updated to address concerns over tree removal expressed by the Little Falls Watershed Alliance (LFWA).  The State Highway Administration (SHA) is still calling it a sidewalk, though it’s meant to be a shared use path per county master plan.  See the links at the bottom of this post for the design diagrams. 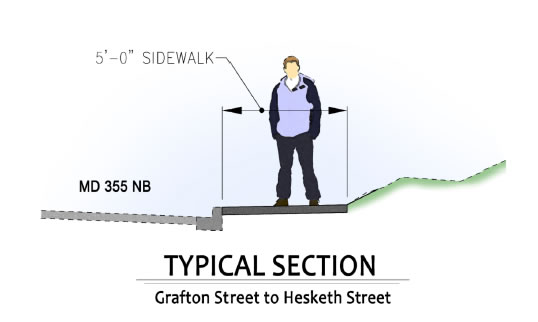 Cross-section for southernmost 250' (Hesketh St. to Grafton St.) and the 200' segment south of Nottingham Dr.

A very serious problem with the new design is that the path would only be 5′ wide with no buffer separating it from Wisconsin Ave. for the southernmost 250 feet of the project (from Grafton St. to Hesketh St).  This is very dangerous for cyclists and substandard for pedestrians.  If you fell off your bike you could easily land in the street.

Note (9/25/12): The path will also have this problem for about 200 feet within the block from Norwood Drive to Nottingham Drive (on the other side of the street of course).  This segment is adjacent to the Chevy Chase Club.  See the overview map here.

The offending segment from Grafton St. to Hesketh St. is next to two residential homes. There isn’t much state right-of-way at that location, so widening the path/buffer would require acquisition of land (via purchase or easement) from two property owners.  MoBike spoke to SHA officials and was informed that acquiring private property next to the road is the county’s responsibility, even though it’s a state road.  But according to the same SHA officials, the state has not reached out to the county nor to the property owners to get more land, and the county Department of Transportation official we spoke to confirmed this and said the county hasn’t reached out to the property owners either.  This was a significant oversight.

Improving the southernmost 250′ would present some practical difficulties as well, even if land could be acquired.  The first house faces Grafton St.   Fortunately there’s only a couple trees between that house and Wisconsin Ave.  The path could be built by just routing it around the trees, if the owners were amenable. The second house faces Hesketh St.  Unfortunately its driveway runs almost to the property line and there are several trees, some of them evergreens, between the driveway and Wisconsin Ave. acting as a screen.  There is also a fence between next to the trees.  The new path design calls for the fence to be moved back to the driveway.  However, widening the path looks like it might require taking some of the L-shaped driveway, which could hinder access to the garage.  But the county needs to at least try to get more land.  If I owned one of those houses, I would certainly allow the path if I were properly compensated.

There are two more houses along Wisconsin Ave. north of Hesketh St.  They share a driveway that runs next to a wall parallel to Wisconsin Ave. The lack of right-of-way and possibly the wall and driveway have led SHA to make the path only 8′ wide there with no buffer between the path and Wisconsin Ave.  The county should try to acquire land from these properties so the buffer can be widened.

These photos show the problem areas near the houses: 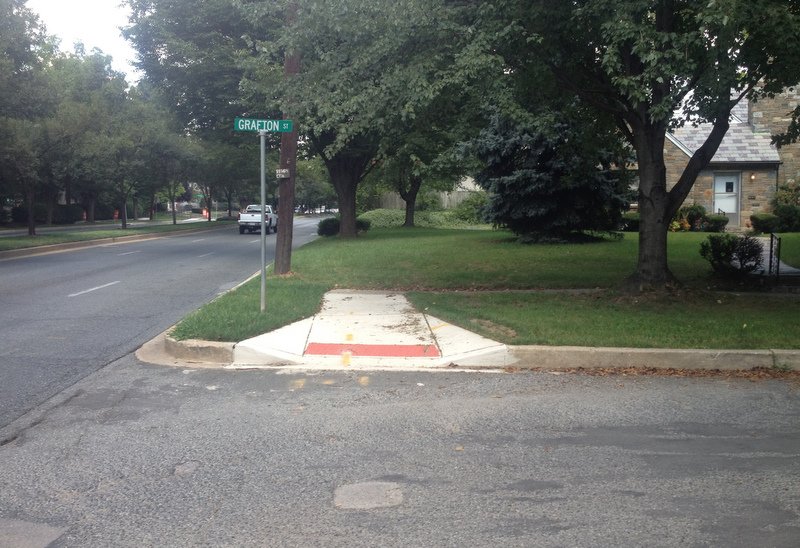 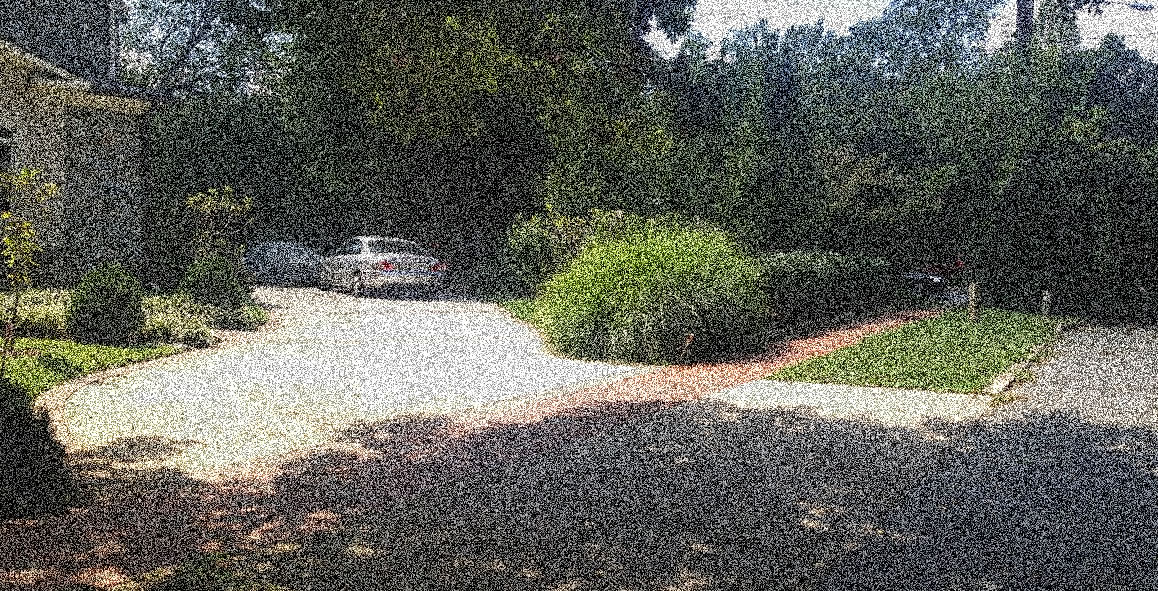 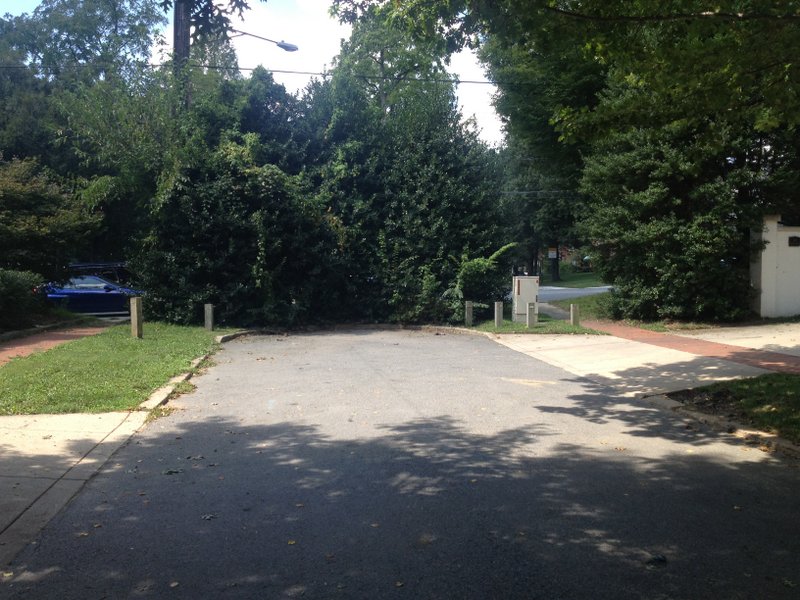 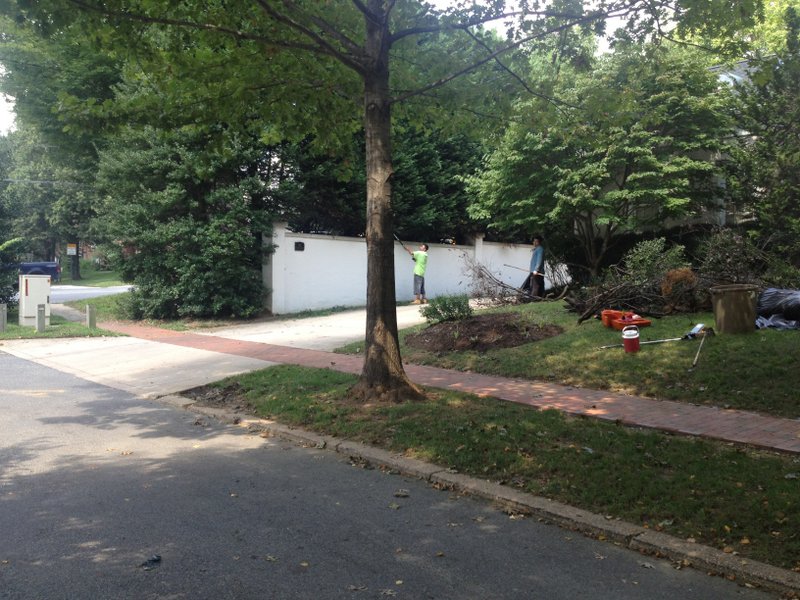 Another problem is the lack of adequate buffer between the path and the road where it passes in front of the Chevy Chase Club.  Although the path would be 8′ wide there instead of 5′, much of this segment has no buffer so it would still be a hazard.  Note (9/25/12): This is true except for about 200′ of country club frontage south of Nottingham Drive, where the path would only be 5′ wide with no buffer.

According to SHA (from Montgomery Gazette, Aug. 15th) the new design would move the country club’s border fence about 3 feet back to the club’s actual boundary.  SHA officials have discussed obtaining additional land from the club but have made no formal requests. Bike advocates are asking the state to look into this as well, because the path should be moved back from the street.  Some portions of the path would have a fence separating the path from the street (because there’s a difference in grade), but the rest of the path would not, since a 4′ buffer is required for a fence to be installed. 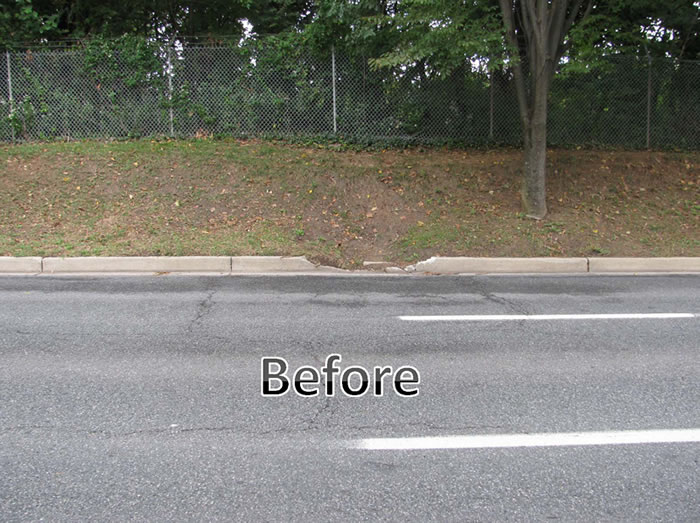 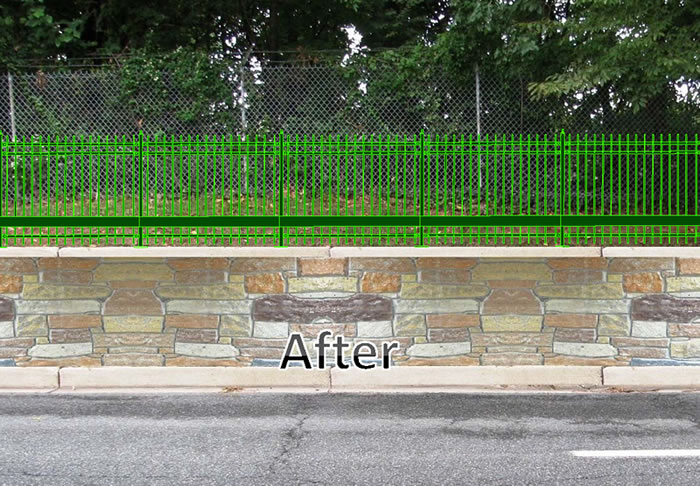 The same segment as it would look after completion. Path is between the two fences.

The LFWA still isn’t satisfied with the new design and has proposed a much shorter path as an alternative.  According to the Gazette, their alternative plan calls for “a short sidewalk south of the Chevy Chase Club between Hesketh and Grafton streets, upgrades to bus stops between Bradley and Grafton, and improvements to an existing sidewalk on the other side of Wisconsin Avenue“.  This would provide better access to the bus stops on Wisconsin beyond the end of the existing sidewalk, but not full connectivity in the corridor (to Bradley Blvd.) so the state has rejected the proposal.  Upgrades to the sidewalk on the other side would be difficult and put bicyclists on a walkway that’s heavily used by pedestrians.

Here is the updated design:

We’ll try to keep you posted of any new developments.