Montgomery County DOT has finished mapping out where bike route signs will go on its upper Bethesda route.  Much of the work was just identifying the route.  The county is officially calling it the “Montgomery Mall to Downtown Bethesda route”.  They’ve already completed the design task for two other signed routes, running along the Georgia Ave. corridor and Rt. 29 corridor respectively, and signs are expected to go up this summer. These routes will likely get route numbers if the county adopts a bike route numbering system.

Below is the list of turns, or see the map.

There are some faster variations, but this route has fewer safety issues.

The route signs will look like this one, more or less, with appropriate arrows and destinations: 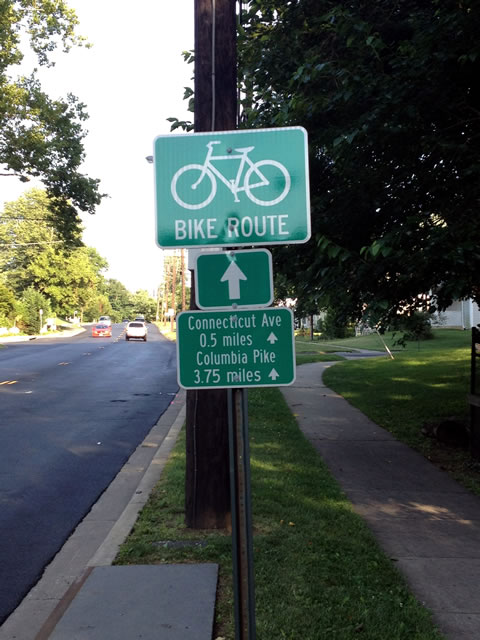 Planned sign format with destinations and mileage. The word "miles" will be omitted.

Destinations named on signs along the route include:

There were some destination questions, like what do you say on the signs at the start of the route on Bethesda Ave?  There are faster ways to get to NIH or Tuckerman Lane (depending what part).   Cabin John Park has multiple entrances miles apart. A good destination to post would be Rockville (the western side at least) but the signs don’t take you that far.

Southbound, downtown Bethesda is expansive and the Capital Crescent Trail has multiple access points. The signs don’t actually reach the CCT but they will clearly direct you to the Woodmont Ave. access point (and somewhat less clearly to the Glenbrook Rd access point).  Signs at the Woodmont access point are another ball of wax (or can of worms?) and are a task for the future.

The county is funding this signage project as well as the others via a new state bikeway grant program.

6 Responses to “Bethesda route to be signed”