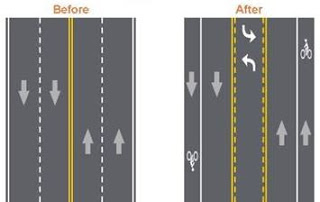 According to FABB, the road diet on Lawyers Road in Reston was a success for cyclists and made the road slower and safer for everyone.   VDOT took a road that had two through-lanes in each direction and converted it to a three lane configuration with bike lanes.  The road now has one through-lane in each direction, a two-way left-turn lane (TWLTL) in the middle, and bike lanes.  Would this make life better for cyclists on Montgomery County roads like Arlington Road in Bethesda or Redland Road in Rockville?

MoBike and WABA have already requested the same 4-to-3 lane conversion with bike lanes on Arlington Road north of Bradley Blvd in Bethesda. It’s an important road for cyclists because it serves north-south travel in downtown Bethesda. Woodmont Avenue is a good parallel route but it’s one-way southbound north of Hampden Lane.

If you’re comfortable riding in traffic, you might not object to Arlington Road’s current configuration since most drivers don’t go fast (25-30 mph) and they can easily change lanes to pass. But less assertive cyclists are surely going to resort to riding on the sidewalk.  The situation only gets worse in rush hour.  Even experienced riders have to be concerned that drivers will change lanes without looking for cyclists, and it’s nerve-racking to make left turns on a bike because you have to stop in the middle of the left lane until you can turn.  So with the advent of BikeShare (and its slow bikes) in the Bethesda area, bike groups requested bike lanes.

Redland Road in Derwood is a busy suburban arterial that can be daunting for cyclists.  The section where a lane diet is most feasible, from Rt. 355 to Crabbs Branch Way, has four lanes with no median.  The half mile long segment passes by the Shady Grove Metro Station so there will be riders using the route.  But the county decided about 10 years ago not to change the road configuration for the adjacent section (east of Crabbs Branch Way) to make room for bike lanes because they wanted to allow two lanes of cars to use it in the prevailing rush hour direction (and neighbors strongly objected to a “Georgia Avenue” style reversible lane).

At least there is (or will be) a shared use path on the north side (the side with Metro) to accommodate bicyclists. So it’s probably not worth the stress to fight a master plan that doesn’t include bike lanes and was specifically changed to eliminate bike lanes on the adjacent section.

Another segment of the same road (called Redland Boulevard west of Rt. 355) has four lanes but a very different dynamic.

This segment induces drivers to travel more slowly because it’s in a more urban setting (King Farm), has fairly narrow lanes, has a median and in some places has on-street parking.  Traffic volumes are much lower here than they are east of Rt. 355.  Parts of it have no left turn lanes at intersections, causing drivers to be more cautious.  Some sections allow parking in the right lane.  Nothing makes drivers more expecting of slow moving vehicles in the right lane than cars parked in their lane.  The only problem with this is that cyclists have to use the left lane to get around these cars, but there are long gaps between parked cars.

So where no extra space is available on a four lane road, elements like parking and medians and lack of turn lanes can make a big difference to cyclists.  That said, bike lanes would have been preferred on this and similar roads in King Farm.

Thai Farm Restaurant on King Farm Blvd is a supporter of bicycling (and owned by my in-laws).