The Montgomery County “Road Code” is the set of standards that governs every aspect of road design on county roads, including the widths of things like travel lanes, bike lanes and sidewalk buffers; the design of stormwater management; and less interesting things like curb height.  This matters a lot to cyclists.  Officially called the Context Sensitive Road Design Standards, the Road Code is actually a set of county regulations.  It can be viewed in PDF form (in the relevant County Council resolution) or viewed online (go to Chapter 49 of the code called COMCOR).  I’ve broken it up into convenient PDF files below.

The county has defined fourteen or more street types.  It’s also defined three area types (land use types) which are urban, suburban and rural.   Street type, area type, total right-of-way width and presence of features like parking or bike lanes determine the recommended widths of each part of the street.  There are 64 resulting “templates” representing different combinations of these factors, which engineers can apply to streets in the county.

The templates are meant only as guides, however, and it’s expected that they’ll be tailored based on available right-of-way and other factors.  The text portion of the Road Code provides much additional information including general guidelines for each element (including preferred width of bike lanes), desired target speeds, tree placement, and stormwater management standards among other things.  The text portion indicates preferred widths that are often greater than what the templates specify.  For example, most templates for arterial streets call for 14′ outside lanes, whereas the text states that 14.5′ “may be appropriate”.  So planners and engineers have options.  In practice though, it seems that road designers go by the templates more than the text.  There is a great deal of difference between 14′ and 14.5′ to a cyclist, but designers are under pressure to choose the smaller value.

I have diagrams for all the templates but didn’t scan them all in.  Here’s an example: 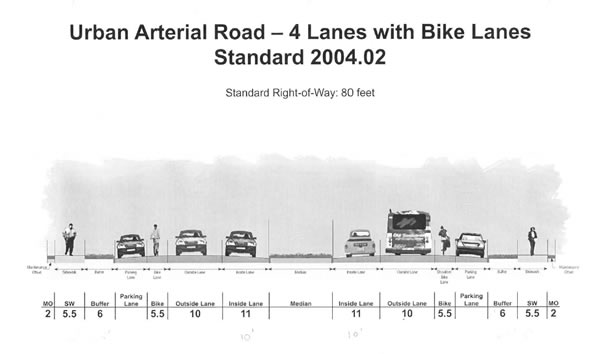 Here are the 64 templates used in the Road Code, digitized from the official version (or you can see the whole set at once):

Where next to a curb, a lane’s width is measured from the vertical part of the curb to the midpoint of the lane line, i.e. it includes the concrete gutter if present.

There is certainly room for improvement in the Road Code.  Most problematic is the fact that none of the business district street templates provide any space for bikes (see below).  Bike space is also lacking for secondary streets, tertiary streets and country roads, though these are often minor streets (industrial streets have wide outside lanes).  One of the templates for primary streets has a door zone problem.

Below are the street types defined in the Road Code.  To get a rough idea of what they mean, see this unofficial map (though it doesn’t distinguish between arterials and minor arterials). The following text, abridged and with my own additions in italics, comes from the Road Code:

As described above, the street type of a road and the area type of its locale determines the templates that apply to it.

There are four templates for business district street (aka business street).  None of these call for bike lanes or wide outside lanes, so it’s important for planners to look beyond the templates when it comes to these streets.  Business streets are highly useful for cyclists, since 1) they are not as fast as arterials, but 2) they are more direct and convenient than lesser streets, and 3) many destinations are located along them.  Furthermore, business streets are common in plans for town centers, urban districts and mixed use areas, which are prime areas for bike transportation.   Every business street should either be very slow (slow enough for cyclists to be comfortable “taking the lane”) or have some provision for cars and bikes operating side by side (bike lanes, wide lanes, or in some cases just extra lanes). When the Road Code is amended at some point in the future, templates for business streets with bike lanes should be added.

Here are visual depictions of the four business street templates.  Elements with no dimension specified are omitted from the template. 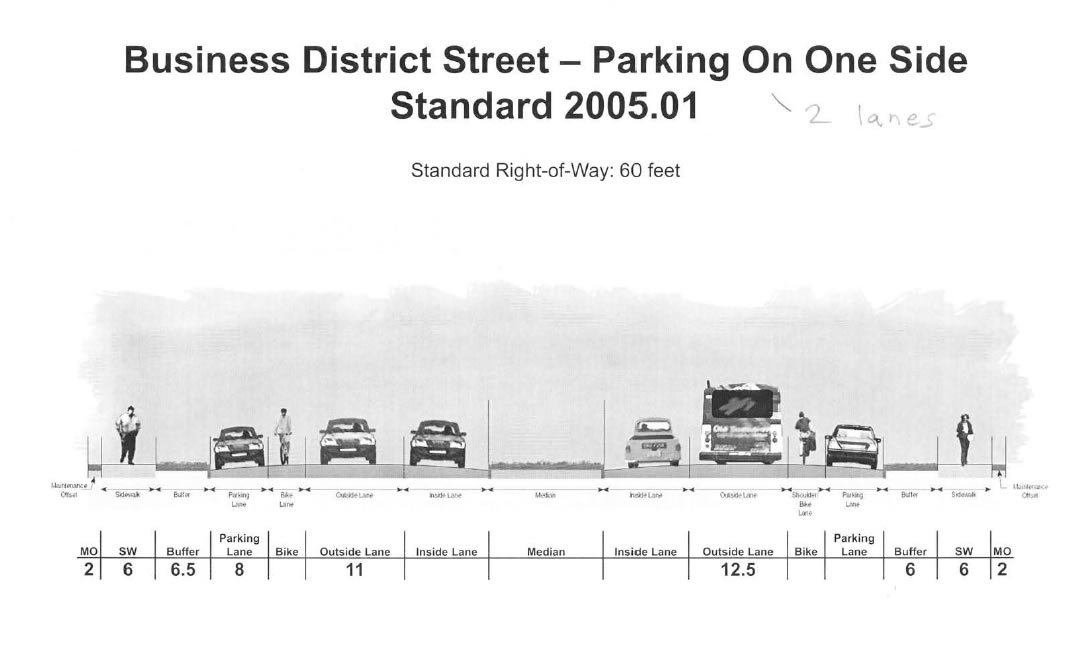 Business street – parking on one side 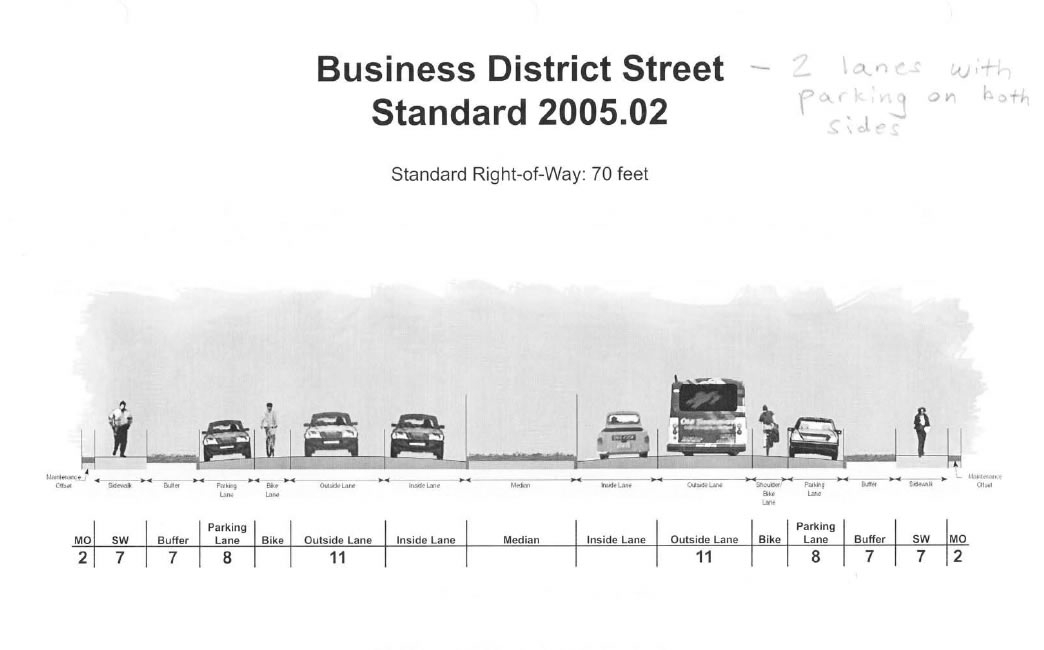 Business street – parking on both sides 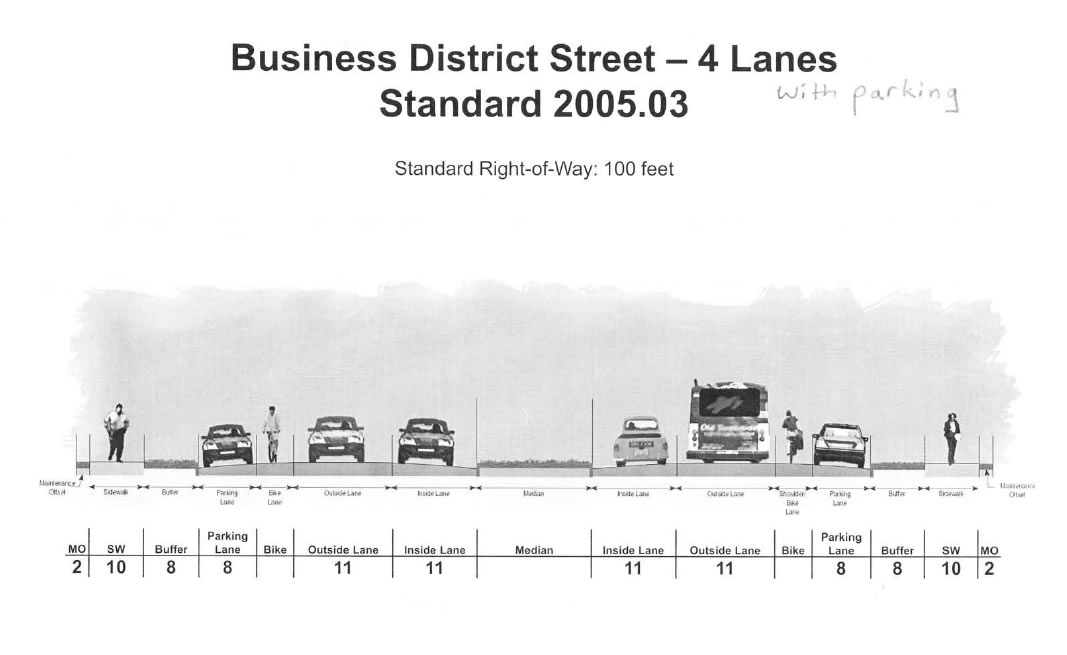 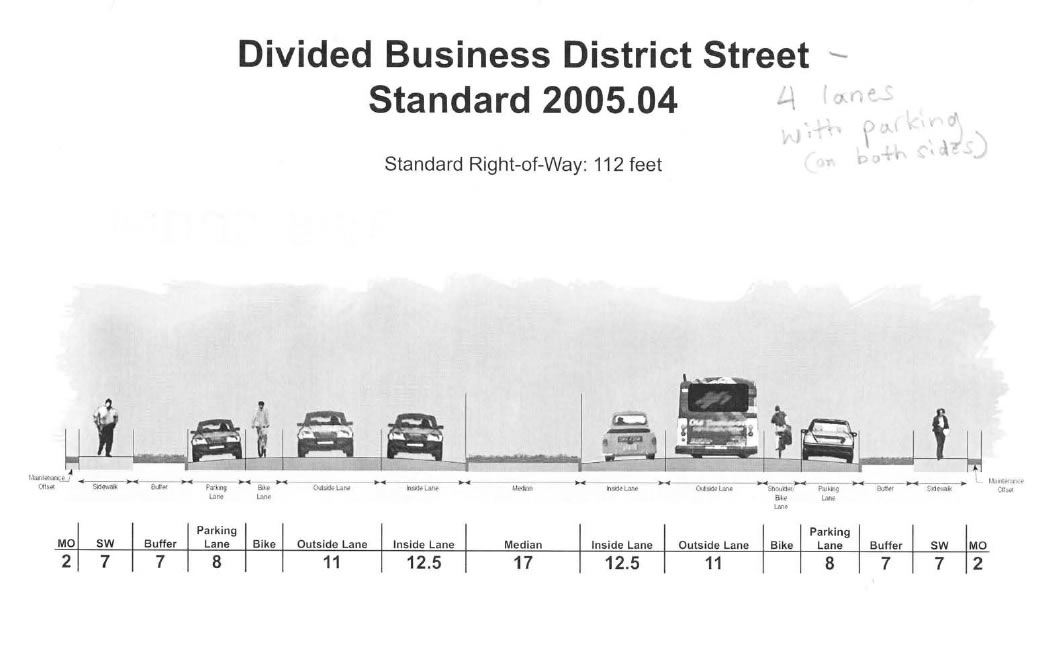 In 2007, the County Council sought to change county road standards in order to reduce traffic speeds and foster a more pedestrian-friendly street environment, particularly in urban areas.  Many desired an approach of narrowing streets to calm traffic and provide more space beyond the curbs, while bicyclists were concerned that narrowing roads might become the default solution.  At the same time, environmental stakeholders wanted to incorporate new stormwater management techniques to reduce stormwater runoff into sewers and streams.  So with urging from bike advocates and water quality advocates and others, the council established a work group of 20+ stakeholders to create the new standards by consensus.   I represented bicyclists on the work group, while other group members came from organizations as varied as the Coalition for Smarter Growth, AAA and WMATA.  Government members on the work group represented DOT, the Planning Department, Montgomery County Public Schools, MCFD, MCPD and various other agencies.  Over several months the work group discussed the issues and hammered out details until they’d crafted a new draft set of design standards.  The county adopted the standards with a few tweaks, creating the Road Code that’s in effect today.

The resulting standards were generally a compromise.  The recommended bike lane widths are acceptable (mostly without door zone issues).  Most street types in the guide have bike lanes as an option (except for one key type).  Wide outside lanes are recommended on fast roads, though the stipulated width is less than what’s desired.  Wide outside lanes on slower city streets are generally a thing of the past.