Montgomery County is in the process of redeveloping the White Flint area, a 430-acre planning division located a few miles south of Rockville.  Under the White Flint Sector Plan, the area will be transformed from a hodge-podge of strip malls, commercial buildings and parking lots into a walkable mixed use community centered around the White Flint Metro station.  The plan’s vision is in part:

…transforming an auto-oriented suburban development pattern into an urban center of residences and businesses where people walk to work, shops and transit. Offices and plazas are full of workers during the day. At night and on weekends people attend the theater, visit galleries, and eat out… Rockville Pike will be transformed from a traffic barrier dividing the center into a unifying multi-modal boulevard…

The plan even states:

All streets must have ample space for pedestrians, bicyclists, and street trees.

This isn’t just an objective.  It’s a directive.  But the plan falls well short of meeting it.

As if that isn’t bad enough, the Montgomery County Department of Transportation is trying to modify the plan by removing bike lanes and eviscerating a shared use path planned for an important road (Old Georgetown Rd) so they can retain more lanes for cars than the adopted plan stipulates.

The plan talks about the importance of walking and biking.  It calls for the state to designate the area as a Bicycle and Pedestrian Priority Area which allows for state funding of certain bike/ped improvements.  It calls for shared use paths or bike lanes along some streets, including currently hostile roads like Nicholson Lane, Old Georgetown Road and Rockville Pike.  The sector will serve bike through-traffic better than it currently does.  Car speeds on many streets will be lower than they are currently.

But the plan leaves several key streets with no accommodations for bikes — no bike lanes, no shared use path and no wide outside lanes.  The plan will make it awkward to ride a bike to some very important destinations in the sector, including the White Flint Metro station and Wall Park.  The plan will make it difficult to travel by bike along certain axes and force riders to go well out of their way to use parallel routes (or they’ll just use the sidewalk).  Roads without bike accommodations will include many new roads and some existing roads that are currently bike-friendly but will be rebuilt.

Here are the roadway and bikeway plans for the sector, respectively (click to enlarge): 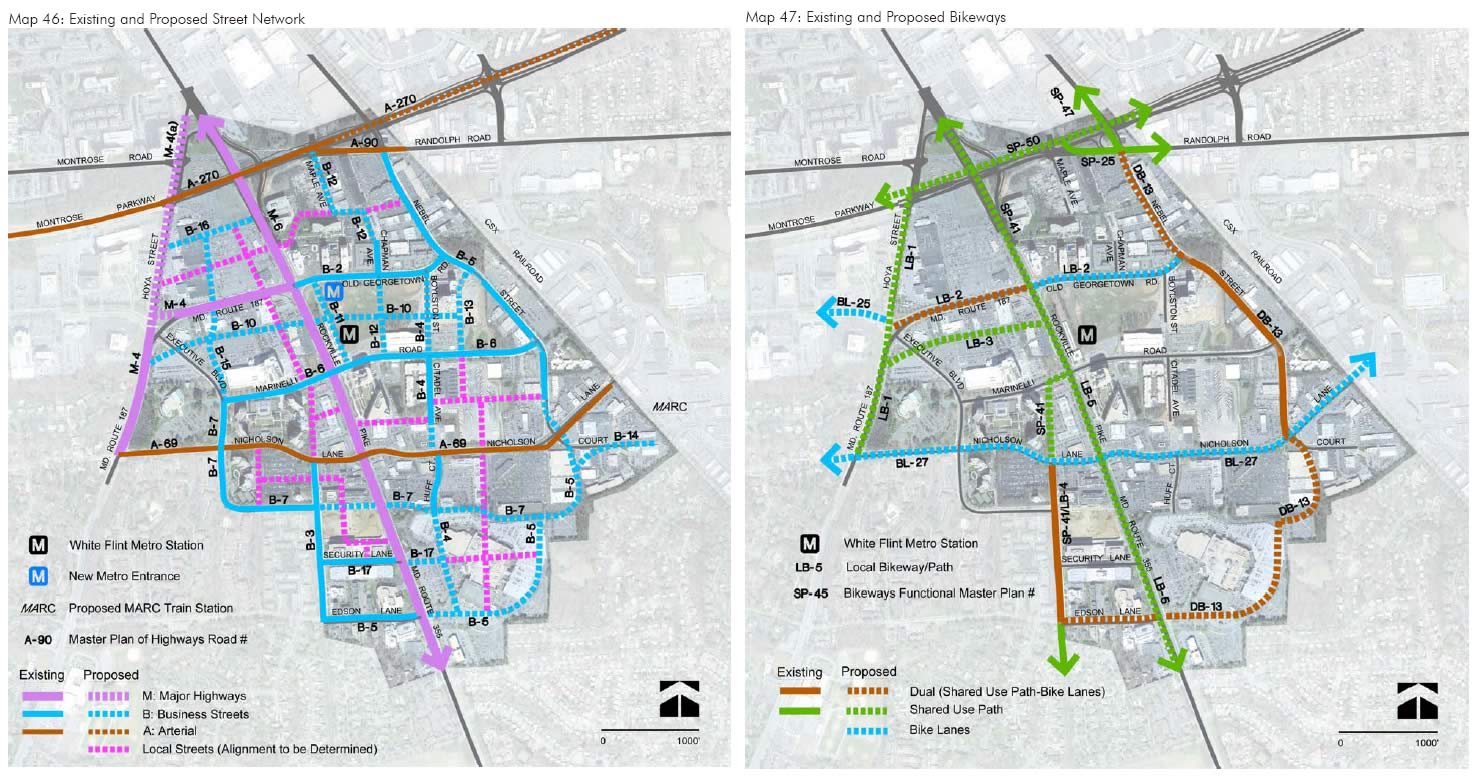 Comparison of roads to bikeways in the final White Flint plan

In 2009, MoBike provided input on the initial sector plan draft presented by the Planning Board to the public for comment.  Among other things, we asked for certain paths to be replaced by bike lanes, which is appropriate given the urban environment.  The Planning Department made some welcome changes in response to our input.  But it also inextricably removed important bikeways from the plan, including bike lanes and a path on Marinelli Rd (an important route to Metro) and bike lanes and a path on Executive Blvd.  The resulting draft was approved by the Planning Board and then by the County Council in 2010, despite objections by MoBike.

Compare the initial and final versions of the plan to see what was taken out: 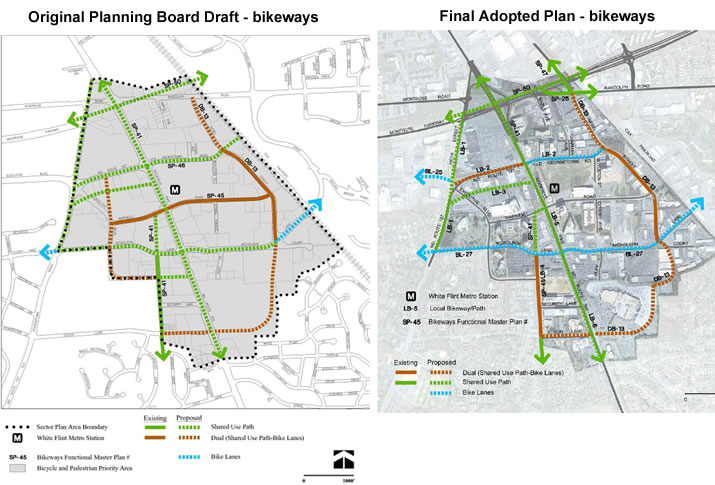 It’s unclear what happened.  There may have been confusion on the part of planners.  Or maybe bike advocates didn’t go to enough meetings.

Business Streets Are Our Business Too

So-called business streets (aka business district streets) are the bread and butter of urban plans, fanning out from arterial roads to connect to destinations and smaller streets.    They are shown on the map of planned streets as blue lines.  Business streets are highly useful for cyclists, since 1) they are more direct and convenient than lesser streets, 2) many destinations are located along them, and 3) they carry fewer cars than arterials.  Bike lanes, wide outside lanes or perhaps cycle tracks are usually the best way to accommodate bicyclists on an urban business street.   Shared use paths are typically not recommended due to high pedestrian volumes.

The root of the problem may be that the White Flint Design Guidelines define business streets to include no bike lanes.  In fact, none of the configurations for business streets (business district streets) defined in countywide “Road Code” standards (specifically these) include bike lanes.  It tilts the field against us when new roads are planned.

It’s galling that a lot of these streets will be new, so there will be no existing curbs, poles or trees standing in the way of creating bike space.  But no foot goes uncontested.  Developers want to maximize space.  Urban planners want street trees.  Businesses want on-street parking.  Restaurants want outdoor seating.  So we end up with a car lane, a parking lane, a “tree lane”, a “cafe table” lane, and so on.  Where are cyclists supposed to go?

At least the streets called “local streets” in plan terminology  (thin dotted pink lines in the map of planned roads) will be more suitable for cyclists due to their slower, tamer nature.   There may yet be opportunity to add bike lanes to some of these streets, since the plan appendix states, “The secondary grid [of local streets and alleys] is not an explicit element of the master planned street network“.  These streets are designed to “improve the permeability of the network for pedestrian and bicyclists” among other things.  But these streets will not connect to every destination.  Moroever, sticking to such minor streets often means having to cross larger streets, wait longer at signals, and zig-zag from block to block.  Too often that’s how cyclists have to travel in the county — dodging furtively from side street to side street.

Consistent with MoBike’s prior requests, the following streets need greater bike accommodations than what’s called for by the plan:

Unclear.  MoBike and other parties are insisting on bikeways over and above what the plan specifies.  Whether this means amending the plan, tweaking road designs during implementation, or finding creative ways to get around the plan, something needs to change.  Sector plans carry the weight of regulations.  Developers abide by them and expect the county to abide by them.   But that hasn’t stopped MoCo DOT from trying to modify the plan by scrapping the bike lanes and all but scrapping the shared use path planned for Old Georgetown Road so they can add extra car lanes.  But unlike DOT’s desired road changes, improving bike accommodations will bring the sector closer to its mode share goal of 50% and allow the sector to better realize its own vision.

One Response to “White Flint plan falls short for bikes”