Good news…  An arrangement to fund and build the Fishers Lane Trail, which will connect Fishers Lane to the Rock Creek Trail near Rockville, has been approved by the Montgomery County Planning Board. Fishers Lane (the road) in turn connects to Twinbrook Metro and is relatively bikeable (in the roadway).  While ultimate construction of the trail depends on funding that has not been allocated, the major issues that jeopardized the trail appear to have been largely resolved.  The superb web page created by Monte Fisher (no relation) covers the trail project and its recent history.

The main issues facing the trail were:

Under the new arrangement, the developer JBG and the Parks Department have agreed to build the trail away from Veirs Mill Road.  While JBG was originally required to fund the entire trail as a condition of developing NIAID, now it’s only required to pay $900K and the Parks Department will cover the rest, though it may take some time for Parks funding to be available.  The Planning Board just approved this arrangement.  Everyone benefits.

The new alignment of the segment parallel to Veirs Mill Road will be located on parkland owned by MNCPPC.  This poses some technical challenges, but the Parks Dept. believes these can be resolved.  Also approved by the Planning Board is a minor change to the trail route south of Veirs Mill Road so the trail can cross Rock Creek on a bridge perpendicular to the stream rather than at an angle, reducing cost.

The original alignment is shown as the pinkish-purple line below (crossed out where canceled) and the new alignment will follow the red line (subject to some small changes since this map was drawn): 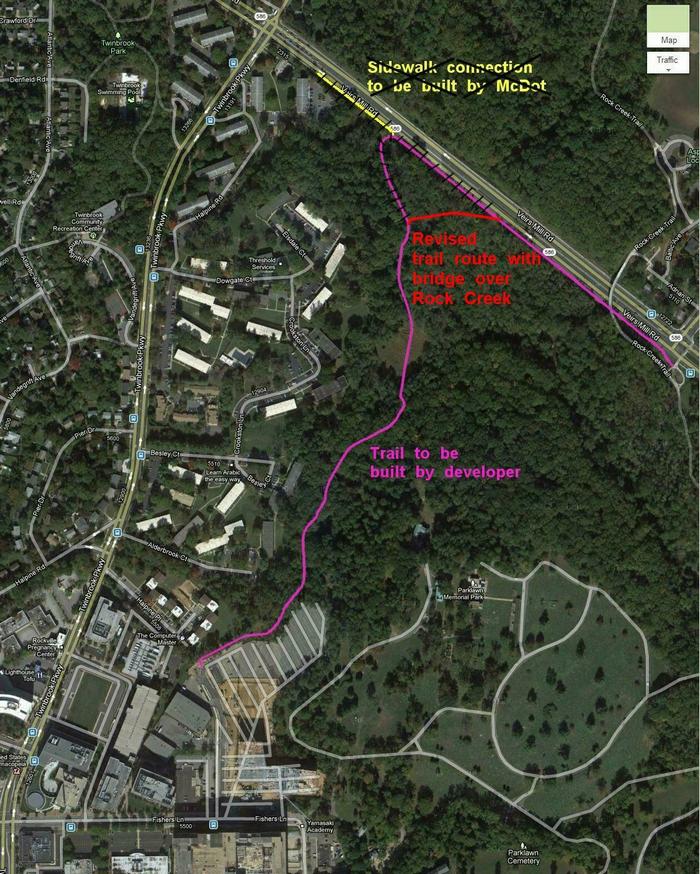 Unfortunately, the BRT plan precludes construction of a segment of the Veirs Mill Road sidewalk, shown in yellow, which would have been a vital connection for pedestrians and bicyclists.

For more about this trail, see Monte’s page.