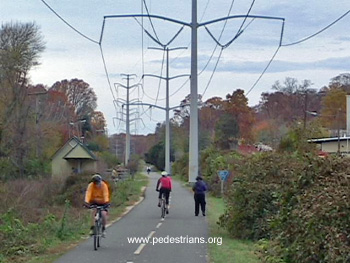 Trail advocates have recently been pushing the county to study the idea of building hiker-biker trails in the rights-of-way of major Pepco power lines.  These strips of land can be ideal sites for trails because they are generally free of development and forest cover, consist of many miles of continuous straight segments, and cut directly from community to community to create excellent connections.

Montgomery County’s Pedestrian, Bicycle and Traffic Safety Advisory Committee  (PBTSAC) has commissioned a working group of public officials and stakeholders to explore the issue.  The PBTSAC may then make a recommendation to the County Executive and/or County Council.  The working group met with Pepco and presented its findings to the PBTSAC last week.

To sum it up, Pepco is very resistant to the idea.  The utility argues that it’s their land and cites everything from wanting to be good neighbors to fearing that people might light bonfires under their lines as reasons not to allow the trails.  In response to the well-supported argument that the extra eyes and ears of trail users would improve security in the corridors,  Pepco asserts that they already watch the lines.  Yet they claim that numerous security problems would arise despite their observation if trails were built, so clearly their observation has shortcomings and more eyes and ears would help.  It’s not unreasonable for Pepco to claim that they can do whatever they want with their own land, but as a utility they already have a mandate to use their resources to serve the public.  These resources include their power lines and the land under them.  If there’s a public benefit that can be gained through a second use of the land at virtually no expense or risk to the utility, Pepco should be required to allow this use.

John Wetmore of Perils for Pedestrians has compiled a gallery depicting trails under power lines that exist today around the country.

To elaborate on Pepco’s rationale against power line trails:

1. Safety.  Pepco says it’s safer not to have anyone near their high tension lines and that safety is their number one priority.  But we can point to a large number of trails along power lines that have not had any safety issues.

2. Private property.  Pepco does not even want us to use the term “right of way” because that might imply they only had an easement, whereas they own the land fee simple. They use the analogy that asking for a trail on their land is equivalent to asking for a neighborhood dog park in someone’s front yard.  Yet Pepco used condemnation powers (or the threat of condemnation) to take private property to assemble their utility corridors.  Shouldn’t the public get something back in return for allowing Pepco to condemn private property?  In any case, public use of these corridors should be considered part of Pepco’s mission to serve the public.

3. Liability.  Pepco feels they have the least liability when they post No Trespassing signs and forbid anyone to be on their land for any purpose.  But to address this concern, all 50 states have passed recreational use statutes.  Let’s ask Pepco what the shortcomings are in the Maryland recreational use statute that could be changed to address their liability concerns.

4. Good Neighbors.  Pepco says they have an obligation to their neighbors not to allow any activity on Pepco land that might disturb them.  Yet consider that many quality trails built in the county were initially opposed by immediate neighbors but embraced by communities they pass through.  If neighbor opposition always stopped trail construction, we’d have very few trails indeed.  Moreover, utility corridors are wide enough that the trails could be located considerable distance from rear lot lines.  The types of activities that tend to draw complaints, such as motorized ATVs, would remain illegal even with a trail there.