Woodglen Drive in North Bethesda now features Montgomery County’s first cycle track.  The county Department of Transportation deserves kudos for its willingness to support this type of facility.  The implementation is not without its shortcomings, but growing pains are to be expected as the county begins implementing cycle tracks, also known as protected bike lanes.  Moreover, the cycle track is not 100% complete (it will be by the end of November hopefully).  The primary problems seem to be intersection design and the proximity of parking to the cycle track, creating the potential for cyclists to collide with suddenly opened car doors.  Moving forward, there are steps the county can take to improve this facility and to create better cycle tracks in the future.  It would be good for the county to adopt some application criteria, design guidelines, and a process for implementing protected bike lanes.

Here’s a great drive-by video taken by Monte Fisher.  Note that the signs and street markings aren’t fully complete yet. 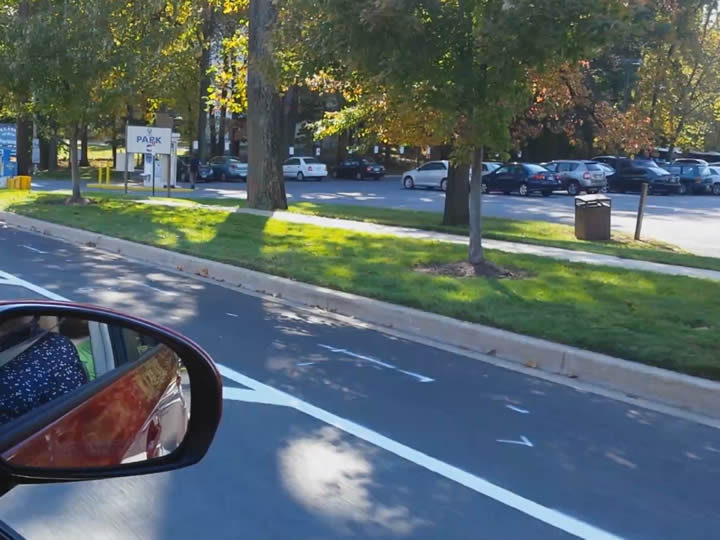 Click to play video (it’s a bit slow to load)

WABA is urging the county to provide a cycle track on Arlington Road in Bethesda as well, in conjunction with a road diet to eliminate a travel lane.  This would improve north-south options for cyclists, calm traffic, and help separate pedestrians from car traffic.  WABA could use your help on this campaign!  For information visit WABA’s People First on Arlington Road page.

The Bethesda Trolley Trail currently runs from downtown Bethesda to the White Flint Metro station, including the entire length of Woodglen Drive.  The original Woodglen design called for bike lanes in the roadway and a shared use path on the west side, creating a “dual bikeway” (on-road + off-road) as called for by the White Flint Sector Plan.  The path would serve as the trail.  However, the bike lanes would’ve come too close to parked cars on the west side, so after much discussion that plan was modified to provide a northbound bike lane on the east side but sharrows on the west side.  Sharrows were considered suitable since the street is relatively calm and cars can cheat into the two-way center turn lane to pass cyclists (as they did before without major difficulty).  There would be a facility for everyone.  However, this plan fell apart when the adjacent neighborhood objected to having 5′ or 6′ wide pinch points in the path to avoid trees and utility poles – poles which could not be removed without prohibitively increasing the cost.  So DOT came up with the two-way cycle track as an alternative solution, ostensibly to serve all types of riders.  Now the cycle track is complete except for some pavement markings and signs.

Probably the biggest concern with the Woodglen cycle track is that half of it is in the “door zone” of parked cars.  Protected bike lanes are supposed to protect cyclists, so they’re not doing their job if cyclists are safer in the street. Intersections are a concern as well.  The transition to two-way bike flow at the north end (at Nicholson Lane) is very awkward, even dangerous, as it’s currently configured.  The transition to the trail across Edson Lane is problematic as well.  Access to side streets on the opposite side of Woodglen is awkward and requires crossing the entire street.  It’s important that cyclists be able to avoid these problems by riding in the roadway without harassment.  Painting sharrows in the roadway could go a long way towards accomplishing that, although DOT believes this would create confusion.

If you haven’t already, go see the cycle tracks for yourself!  It’s great to see the county taking bicycling seriously.  Please use the comment section to express what you like or don’t like about the Woodglen solution.  I’m looking for comments to pass on to the county.