The Montgomery County Department of Transportation is considering construction of a cycle track, also known as protected bike lanes, on Woodmont Avenue in Bethesda.  The project would require removal of one lane (often used for parking) between Old Georgetown Road and Hampden Lane.  The county is suggesting a two-way cycle track on the west side of Woodmont, but this might not be the best option.

After some consideration, I recommend that the county:

Any solution must factor in what the bike accommodations will ultimately look like on Woodmont Ave between Battery Lane and Old Georgetown Road, even though it’s not part of this project.  The county master plan calls for bike lanes on all of Woodmont (presumably cycle tracks would qualify).  The total width is only 48.5′ wide including gutters, so the county would have to remove 2 of the 5 lanes to create room for conventional bike lanes or one-way cycle tracks.  This is certainly possible, as parking could be removed wherever there’s a left lane, or stop signs could replace the signals so that turn lanes are not required.  But if only one lane can be removed, options are limited.  There would be room for a conventional bike lane on one side and parking + sharrows on the other, similar to the original Woodglen Drive proposal (the two roads have almost identical dimensions).  This would in all likelihood be safer than a two-way cycle track.  But a “protected” facility is desired.  So for purposes of this article, assume there will be a two-way cycle track on the west side of Woodmont Ave north of Old Georgetown. For more discussion of this segment, see this post.

Where to put the one-way to two-way transition?

Assuming that a west-side two-way cycle track is the choice north of Old Georgetown Rd and conventional bike lanes are provided south of Hampden, the problem can be viewed as a question of where to make the transition from a pair of one-way bike facilities to a two-way bike facility.  To keep the cycle track(s) one-way as much as possible, provide straightforward access to Metro, and be backward-compatible with the existing Woodmont configuration north of Old Georgetown, I chose to place the transition at the Old Georgetown Road intersection, shown below.  It can rely on existing signal phasing but does require some extra buffering and a new curb cut at the southeast corner. 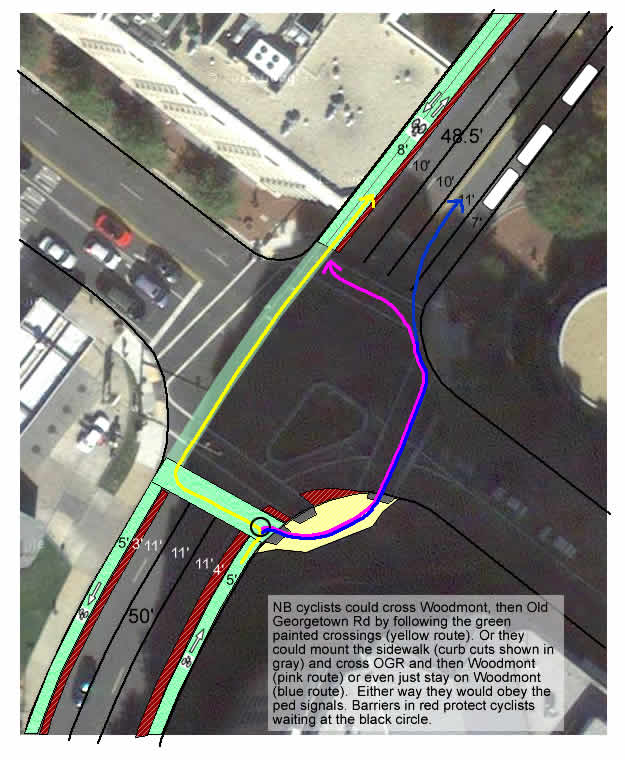 If a transition at Old Georgetown isn’t workable, the transition from one-way to two-way cycle track could work at Edgemoor Lane, North Lane, or Montgomery Lane instead (not Hampden Lane).  But these three options would force northbound cyclists to ride the “wrong” way for some distance and force them to make two transitions to continue north of Old Georgetown Rd for the time being (until the cycle track is extended north of OGR, which might not happen for some time if ever).  Transitioning at Montgomery Lane has the advantage of being very quick and simple (crossing Woodmont might even be quicker than going straight since there’s only one lane to cross).  But then northbound cyclists trying to get to Metro would have to cross Woodmont again only a block later or else ride on the sidewalk.  (A transition at Montgomery would already need signs and pavement markings to convince bicyclists to turn left in order to go straight, so additional signs telling Metro-bound cyclists to actually go straight via the sidewalk might add confusion).  The transition could be placed at North Lane instead, which is a relatively simple intersection with good sight-lines, but the two-way cycle track segment would still cross multiple driveways on the west side and wouldn’t quite reach Edgemoor, where cyclists might want to turn right.  Putting the transition at Edgemoor Lane would address the latter issue but it’s a more complex intersection than North Lane, possibly requiring signal changes, and it still leaves one dicey driveway to cross (at the gas station) and the compatibility issue at Old Georgetown.  The further north the transition is placed, the less “wrong” way riding is required.  It’s worth noting that northbound riders going the “right” way (on the east side of the street, that is) may catch drivers emerging from the parking garages on the east side by surprise, so safety is not guaranteed.   Nevertheless it makes more sense to put the transition at Old Georgetown Road (and then the transition doesn’t have to be provided at all until the cycle track is extended north of that point).

If the transition is placed at Montgomery Lane, the curb extension should be modified to allow cyclists to easily mount the sidewalk to get to Metro or, if they prefer, turn right on Montgomery towards East Lane and Wisconsin Ave.  A contraflow bike lane would be welcome addition on East Lane which is a one-way street away from Metro.

Here’s the Old Georgetown Road if the transition is further south, but it works well only if the cycle track is extended north of the intersection: 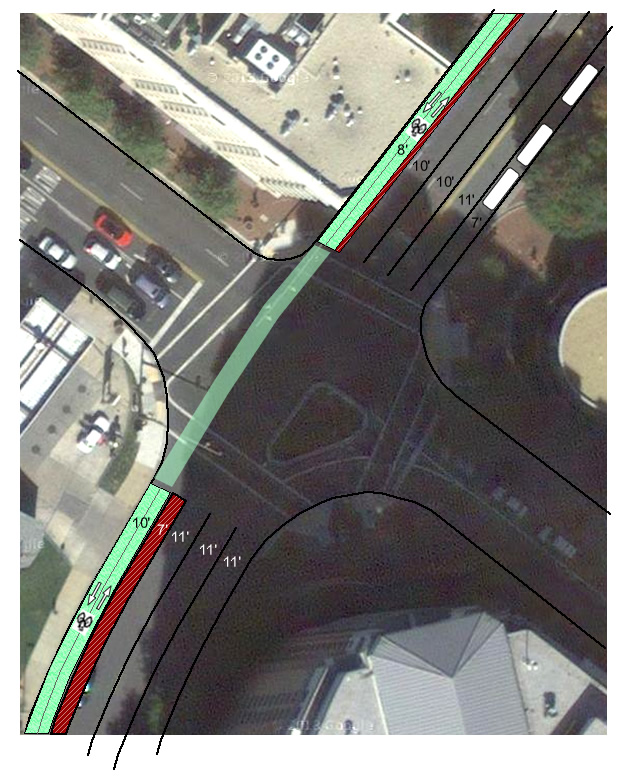 Which side should the two-way cycle track be on?

The other question is which side of Woodmont Ave to put the two-way cycle track on where it is two-way.  North of Old Georgetown Road, I recommend putting it on the west side to connect better to the western portion of Norfolk Ave (the route to the Bethesda Trolley Trail) and other streets in the Woodmont Triangle grid.  South of Old Georgetown Rd, putting the cycle track on the east side would make for some very awkward transitions.  So the west side makes much more sense.

Throughout this segment, Woodmont Ave is 50′ wide including gutters.  There are four southbound travel lanes.  North of Edgemoor Lane, the existing lane widths are 14’, 11’, 11’ and 14’, respectively, and parking is permitted off-peak in the right lane.  South of Edgemoor a bike lane appears and parking is not allowed.  There are various driveways, garage entrances and side street crossings within this segment.  At Montgomery Lane, the two left lanes must turn left.

Why one-way?  See the discussion above, “Where to put the one-way to two-way transition”.  If any part of this segment is to have a two-way cycle track however, it should be on the west side like this:

The picture below shows what cycle tracks would look like on the east side. This nominally puts cyclists on the “correct” side for a two-way street, but the transition at the south end would be very awkward, so this solution should be rejected.

From Montgomery Lane to Hampden Lane

Putting the cycle track on the west side in this block would force cyclists to cross to the other side of Woodmont at Hampden Lane. Cyclists would have to be protected from oncoming traffic (even cars turning left, which would come too close) with a left turn signal phase, and even then they’d have to be wary of drivers coming from behind and turning left – hardly a “protected” facility. So this isn’t a good option:

Putting the cycle track on the east side would yield this even worse crossover at Hampen Lane, forcing cyclists to cross two streets unless a dedicated bike signal phase were provided. Either way, it would make cyclists wait a long time at what is currently a very simple intersection. This is a poor option:

South of Hampden Lane, cycle tracks would be problematic.  Pedestrian behavior tends towards anarchy there so it would be impossible to keep pedestrians out of cycle tracks, which would have to be placed between parking and the curb due to save space.  The intersections are already complicated by frequent turning movements, disappearing turn lanes, very short blocks, a major trail crossing (soon to be a cycle track itself) and odd angles.  The skewed Bethesda Ave intersection is a six-way monster junction.

But the following bike lane improvements are needed:

Here is the current configuration (dated drawing, not guaranteed to be exact).  Curb-to-curb width is 50′ between Hampden and Elm, 60′ south of Elm: 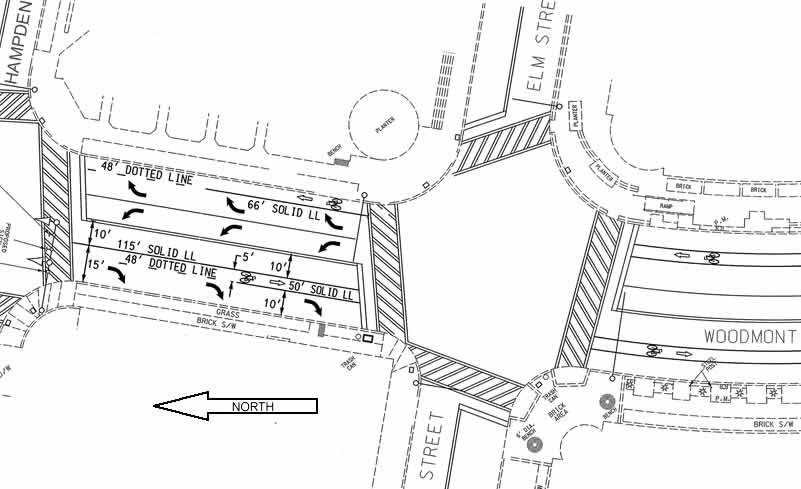 Below is our proposed configuration south of Hampden. The bike lanes are improved, the travel lanes are narrowed, and the lane designations are changed. 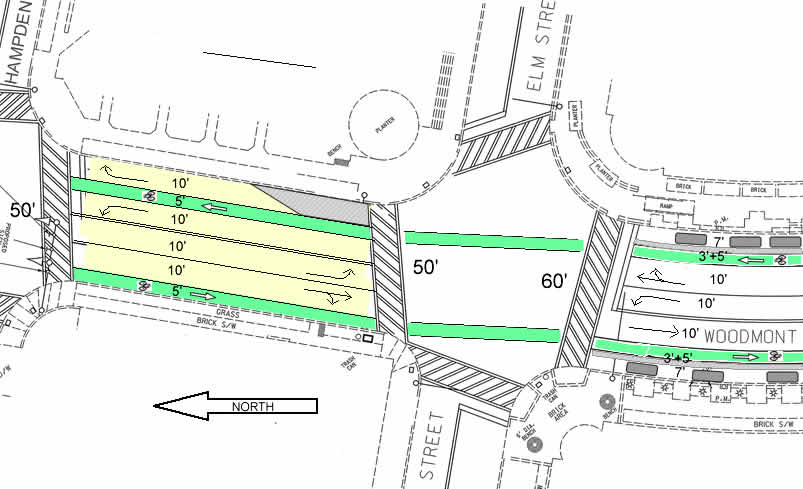 There are many things to consider!