The new draft of the Montgomery County Bicycle Master Plan is about to go before the County Council.  Please let the Council know you support the plan and tell them how it can be improved.   Express your support at the hearing or in writing by July 10th.   The draft plan is an excellent template for the future, representing a paradigm shift towards “low stress” bikeways like protected bike lanes (cycle tracks), shared use paths, and bicycle boulevards.  The proposed network of low stress bikeways will attract more people who want to bike but are afraid of riding too close to cars.  This will increase the number of people out there on bikes.

BUT WHERE ARE THE SHOULDERS?

It’s an excellent plan.  We should all support it.

But it does have a few issues that should be addressed by the County Council.

Notably, the plan omits a great many bikeable shoulders and conventional bike lanes that are used by cyclists in the county today.  The plan ascribes too little value to these so-called “striped bikeways” on busy roads, because it does not consider them to be low stress (they’re called “striped bikeways” because a real or implied stripe rather than a physical barrier separates bikes from cars).  In a sense, the plan marginalizes confident cyclists who want both safety and efficiency – the “power users” of the bike network – who are often best served by striped bikeways.  In most cases the plan doesn’t call for existing shoulders to be retained – even when it’s feasible to retain them AND provide a low stress option. 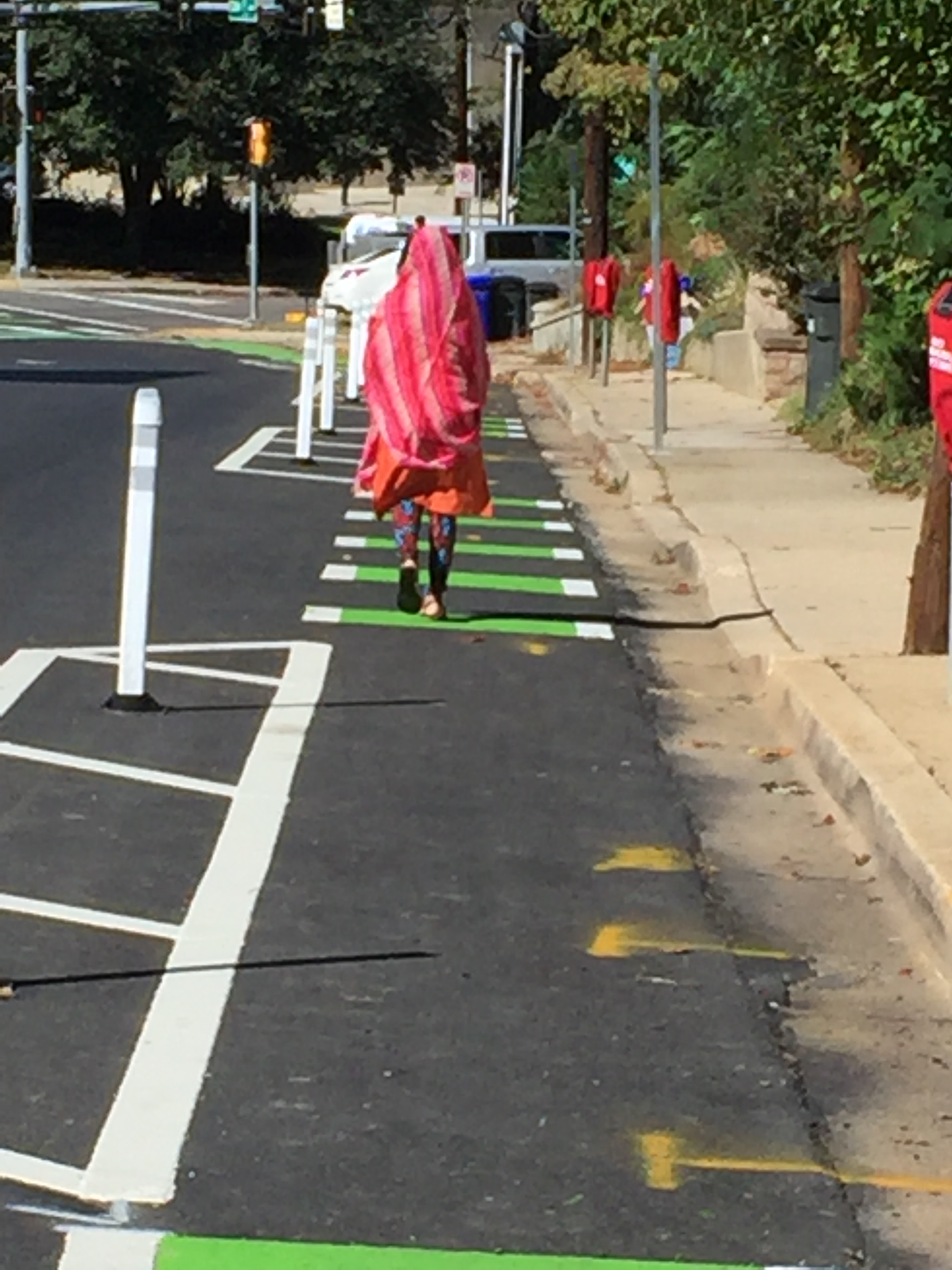 Many experienced cyclists rely on shoulders (and conventional bike lanes) because they provide some separation from busy traffic, but are often faster and more convenient than protected bikeways and sidepaths. They allow riders to maintain continuously higher speeds, maintain right-of-way at intersections, and ride where they’re more likely to be seen.   Protected bike lanes, on the other hand, can make it harder to exit and re-enter the bikeway, which cyclists may want to do to get around pedestrians and obstacles, make quick left turns, avoid right-hooks at intersections, or avoid cars with their noses sticking out, among other reasons.  When placed behind parked cars, protected bike lanes invite pedestrian conflicts and reduce visibility, making it dangerous to ride too fast.  Yet they still expose cyclists to traffic at intersections.  Sidepaths are even more problematic at intersections, and most importantly, they must be shared with pedestrians.  Path cyclists must keep speeds down and always be concerned at side street and driveway crossings.

County planners point out that the plan doesn’t explicitly call for the removal of existing shoulders or conventional bike lanes, but the plan obviously intends to remove these bikeways on a vast number of roads, and planners aren’t willing to provide assurances for other roads.  Where these facilities aren’t explicitly called for by the plan, they are at risk of being removed or narrowed (intentionally or inadvertently) the next time the street is modified or resurfaced.  This can happen when: 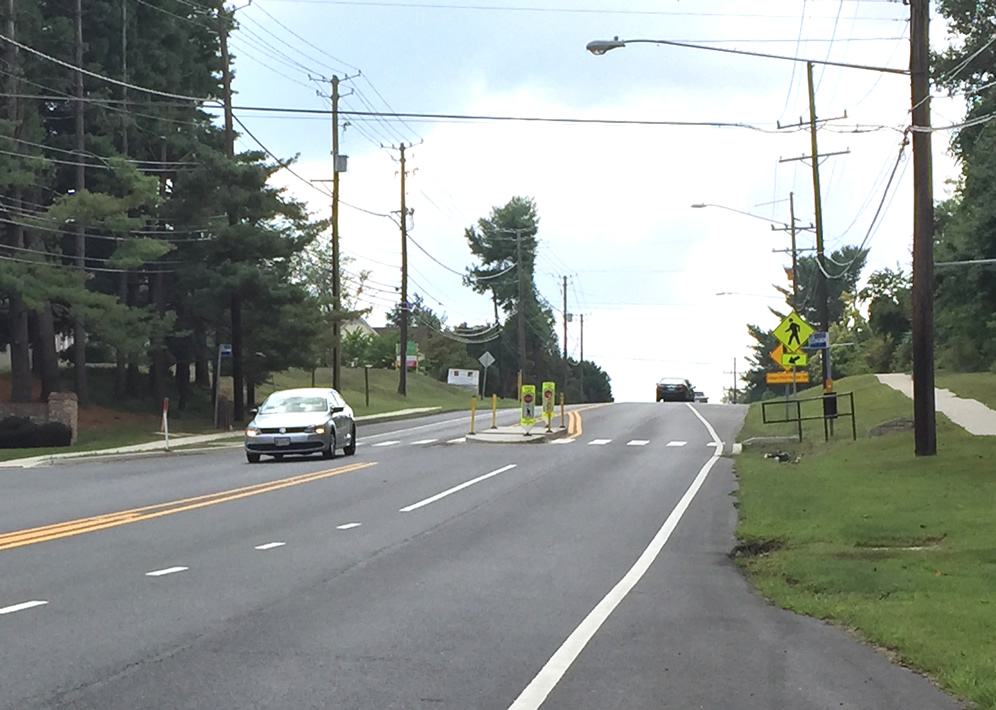 Shoulder was pinched when an island was added (Seven Locks Rd)

Not specifying existing shoulders in the plan also makes it less likely they’ll be improved (by filling in short gaps, for example).

THE SOLUTION: PROVIDE BOTH

It’s still very important to provide low stress bikeways.  So the solution, wherever shoulders have value, is to provide both shoulders (or conventional bike lanes) AND a low stress bike facility along the same road.  The low stress element would likely be a sidepath or a two-way protected bike lane on one side.  In some cases the shoulders may allow parking.

This “dual bikeway” treatment isn’t needed (or even possible) on every street. But it’s generally appropriate for roads which meet these criteria:

Dawson Farm Rd is an example of a dual bikeway, having both conventional bike lanes and a sidepath:

The Planning Department’s primary objection to dual bikeways is that providing shoulders or conventional bike lanes could make it more difficult to implement the low stress bike accommodation.  But I’m recommending dual bikeways where they’re likely to be feasible.  For some other roads I’m asking for what I call a “qualified dual bikeway”, meaning that if both bikeway types can’t be feasibly implemented, then just provide the low stress bikeway.  This idea was rejected by planners, who seem afraid that any mention of the striped bikeway option could lead implementers to choose that and only that.  The resistance to dual bikeways seems rooted in distrust of DOT — a belief that DOT will disregard the plan and use the dual designation as an excuse not to build the low stress component.   My response is that I don’t trust DOT to do what’s NOT in the plan — because, after all, it’s not in the plan.

The Bicycle Plan notes that bikeable shoulders or conventional bike lanes “can” be provided as long as they do not substantially detract from the accompanying recommended low stress bikeway.  I’ll work to make sure this becomes the policy of Montgomery County DOT and Maryland SHA.  But it’s a weak guarantee.  The plan should still stipulate these elements road by road, so it’s clear to everyone from DPS supervisors to DOT engineers to the next round of planners that these facilities are worth providing.  I don’t see how this could be interpreted as a green light to ignore the plan’s low stress mandate, repeated over and over in the document.

Below are my recommendations of what needs to be added to the plan.

This list specifies roads where both the existing shoulders and a low stress bikeway should be planned, but with a note saying that if both don’t fit, at least provide the low stress bikeway.  I call these “qualified dual bikeways”.  If the plan doesn’t specify the shoulders, DOT may needlessly remove them.  In priority order they are:

Roads that are no-brainers

The following roads already have both conventional bike lanes and a shared use path that fit together comfortably.  It’s unlikely that either bikeway would be removed, especially on the state roads, but it’s safer to recognize them in the plan:

Roads that need more than a sidepath

For the following roads, shoulders exist and only a shared use path is recommended in the plan.  Either keep the shoulders (and fix pinch points) or provide protected bike lanes, but above all, a path should not be the only bike facility.

Some segments of the following state roads have existing shoulders or wide lanes that could be narrowed to make room for shoulders.  But each road is long and complex.  It’s late in this planning process to be studying each one. Therefore advocates may want to work with SHA, which has a good record of providing shoulders or bike lanes where they fit, regardless of county master plans.  The general segments are:

Shoulders that ARE in the Bicycle Plan

Fortunately the plan recommends shoulders or conventional bike lanes on several roads.  Here they are, excluding roads in rural areas (sorry if I’ve missed any):

In rural areas, the plan proposes bikeable shoulders on several more roads.  It does this almost casually, covering many roads where there’s little hope of adding shoulders, like Seneca Rd or rural Clarksburg Rd.  Rural Montgomery County can be a conundrum for road cyclists who don’t want to “take the lane” on fast roads – full of missing links and few comfortable ways to get there by bike.  At least the plan calls for retention of what shoulders already exist in rural areas.

Sometimes I feel as if there’s a defensive posture in bike planning circles due to resistance planners must have received from avid cyclists when protected bike lanes were first proposed — resistance based on the notion that cycling is easier and safer when you’re not trapped along the edge of the road, possibly going in the wrong direction.  Years of being told to “get on the bike path” can make bikers grumpy, and then to hear it from bike planners, well, that couldn’t have gone over well.  Defensiveness can lead to fear of any messages that could be construed as distracting or mixed — messages like shoulders have value or dual bikeways are a good option.  In the new draft Bicycle Plan, neither the objectives,  metrics nor road-by-road recommendations pay much heed to the value of facilities that aren’t defined as low stress.  But I shouldn’t be too critical.  The plan authors did add a nice statement in the plan that truly acknowledges the value of shoulders (a statement I submitted by the way), which I appreciate.  But I’m concerned that this plan (and almost every plan I’ve seen touting protected bike lanes) characterizes research data in a way that dramatically understates the percentage of likely cyclists who are confident riding in shoulders.  That’s a sign that people might be trying just a little too hard to push for their favorite facility type.  But then, we’re all zealous from time to time or we wouldn’t be good bike advocates!

2 Responses to “Bike Master Plan – Where are the shoulders?”