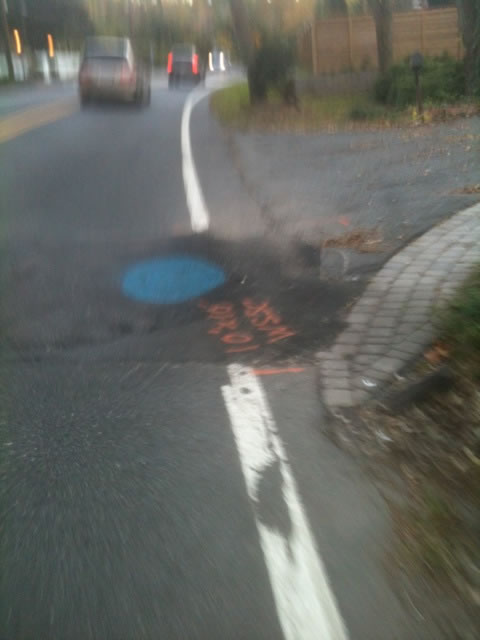 Bradley Boulevard (MD 191) is used by many cyclists riding into downtown Bethesda from the west.  East of Seven Locks Road it has semi-decent shoulders for the most part, even if they sometimes dwindle to almost nothing.  Unfortunately the shoulders can be plagued with maintenance problems.  I sent the following list of needed fixes to the State Highway Administration to address.  (Thanks Steve Friedman for the photos!)

ue to rake big leaf piles onto the shoulder.  This is unlawful and dangerous.  Anyone who wants to take on that issue please contact me!

Long term, the county is looking to improve Bradley between Wilson Lane to Goldsboro by making the shoulders a consistent 5′ wide, adding a shared use path to the north (west) side, and adding a sidewalk to the other side.  The 5′ shoulders might be marked as bike lanes.  Shortly after this Bethesda Patch article on the project was published, the project was approved by the County Council with the 5′ shoulders instead of the 4′ recommended by the county (thanks to the input of bicyclists who insisted on the extra foot).  Approved doesn’t really mean approved until it’s funded, so it may be awhile before it actually gets built and it could still be canceled.