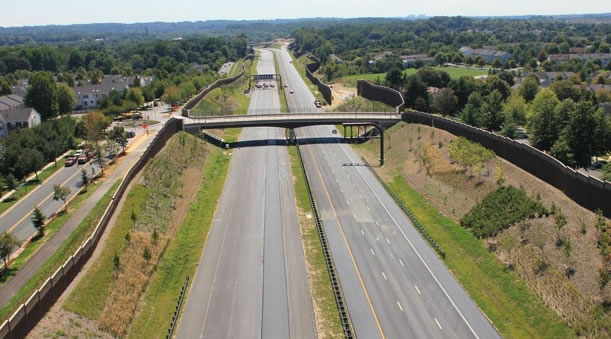 Bike advocates are asking the Maryland Transportation Authority (MdTA) to let people bike on the shoulders of the gleaming new ICC highway.  Is this a crazy idea?  Well, many other highways in the country allow it.  Maryland already allows shoulder riding on parts of US 15 north of Frederick and many miles of US 29, including areas with highway interchanges where vehicles enter and exit via high speed ramps.  To make the ICC shoulder use a greater possibility, in 2008 the Maryland General Assembly repealed the law prohibiting the state from allowing cyclists from all toll roads.  But MdTA must still pre-approve it on individual toll roads.

Allowing cyclists on the ICC shoulders should be easy through the simple interchanges such as the ones at Georgia Ave., Layhill Road, New Hampshire Ave. (though heading west across Georgia Ave. may require getting off and back on the highway).  A better level of usefulness is achieved if cyclists can ride on the shoulders at least from Emory Lane to Old Columbia Pike.  That way riders can bypass several missing sections of the ICC Hiker-Biker Trail (one gap is between Emory and Georgia, a second between Layhill and Notley Road, and a third between New Hampshire and Briggs Chaney Rd.).

Fortunately there’s a service entrance at Muncaster Mill Road (a bit west of Emory) where cyclists should be able to get onto the shoulder from either Muncaster Mill or from the path (if MdTA is willing to unlock the gate).  At Old Columbia Pike (a few miles east of New Hampshire), access to the south shoulder is easy, but getting to the north shoulder means building a short connector path running down the bank next to the highway.  That requires money and federal re-permitting, so it would be a tough sell.  But it would address the longest and most intractable gap in the ICC trail – namely the section through the Upper Paint Branch Park.  Other non-interchange crossings – Redland Road for example – would require pushing enough dirt around (re-grading) that they’d probably be summarily rejected by MdTA.  At the US 29, I-95 and I-370/Metro interchanges, shoulder use might be precluded by the complex arrangement of ramps and flyovers, at least for some directions of travel, but this should be investigated.

You can decide for yourself where to provide shoulder access using the following map (click for a larger map).  Assume access is easy at the blue stars and somewhat expensive at the green stars.  Shoulder use might be limited or prevented at the red stars due to complex interchanges (TBD).

The state’s response to our request for shoulder access was disappointing.  Here are their basic reasons for opposing shoulder use (I’m not agreeing, just summarizing):

Bikes would cross on-ramps something like this (but without the bike lane symbols on the pavement): 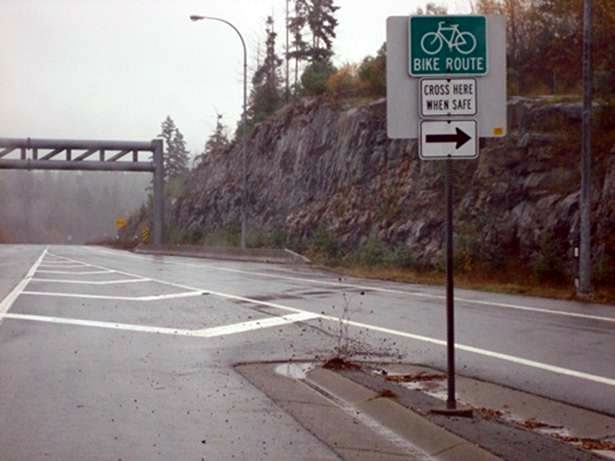 Now if we could just get more of the ICC path and the connector paths built.  For now we have this (where the trail ends at Needwood Road):

End of the road (for bikes)

5 Responses to “Biking on the ICC Shoulders?”