A few years ago Montgomery County added bike lanes to Woodmont Avenue in Bethesda.  Some cyclists opposed the change while some others said they felt they could finally ride on Woodmont.  The bike lanes pretty much fail between Elm Street and Bethesda Avenue (by Barnes and Noble, Cosi’s, etc.) because of parking and loading activities next to the bike lanes, as shown below.  But I think a lot of riders ignore the bike lanes there and just ride in the travel lane.  Cars go very slow in that block.  I find the bike lanes elsewhere on Woodmont to be generally usable except for. . .  the nightmare at Elm Street (and Hampden Lane). 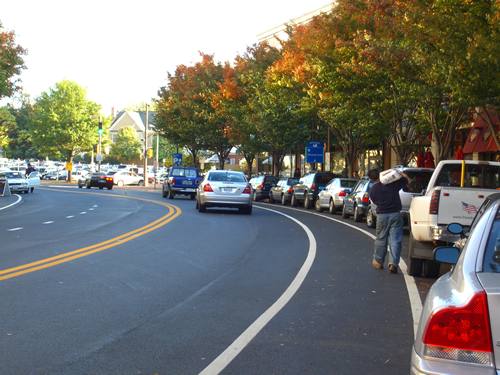 The right hook. The block between Hampden and Elm heading south has become a problem.  The county first painted the bike lane to the right of the right turn only (RTO) lane all the way to Elm St. where drivers turn right.  Oblivious cyclists wanting to go straight could get clobbered by oblivious drivers turning right.  Cyclists decried the design, shown here: 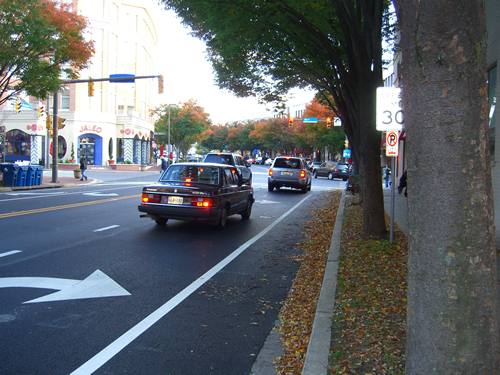 The Plan.  So I helped DOT come up with the following configuration, based on some study and the advice of bike engineers around the U.S. (it’s a challenging problem).  This new design allows cyclists to move over to the left side of the RTO lane before they reach Elm.  Here’s the design (click to enlarge):

This design has these features:

Reality.  Unfortunately DOT has gone through three iterations of trying to implement this design and still can’t get the painting right.  (DOT has done a great job on some restriping projects but has failed on others).  Now the bike lane goes all the way to the Hampden intersection stop line instead of stopping 60′ short.  You can see that here: 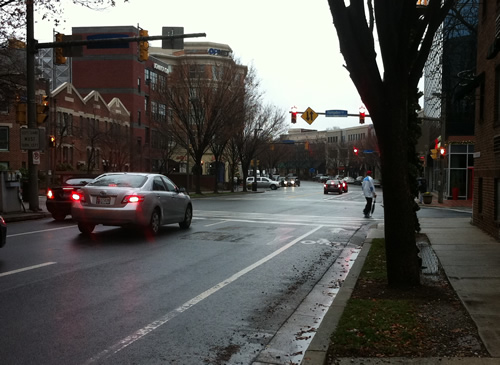 Then the bike lane restarts on the left side of the RTO lane immediately after the intersection.  There’s no transition area at all, except for the intersection itself I suppose.  For good measure there’s a bike lane symbol where there isn’t  supposed to be a bike lane.  Here’s the view looking south towards Hampden: 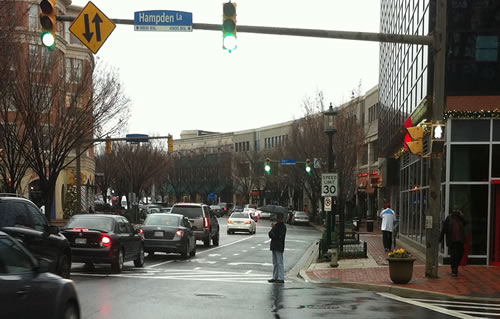 This layout freaked out at least one county official when she encountered it last month during our bike tour of Bethesda.

What to do now.  Here’s a question: Was the original Woodmont Avenue bike lane really so bad?  It had one key advantage: it was simple.  Simple to paint and simple to ride.  Was the right hook problem any worse at the RTO lane than it is at Bethesda Avenue today?  I saw a bus turning right onto Bethesda Avenue almost hit one of those officials riding with us last month.  DOT could put up a big sign before Elm St. telling drivers turning right to yield to cyclists.  Drivers already have to yield to pedestrians in the crosswalk.  This would catch drivers’ attention: 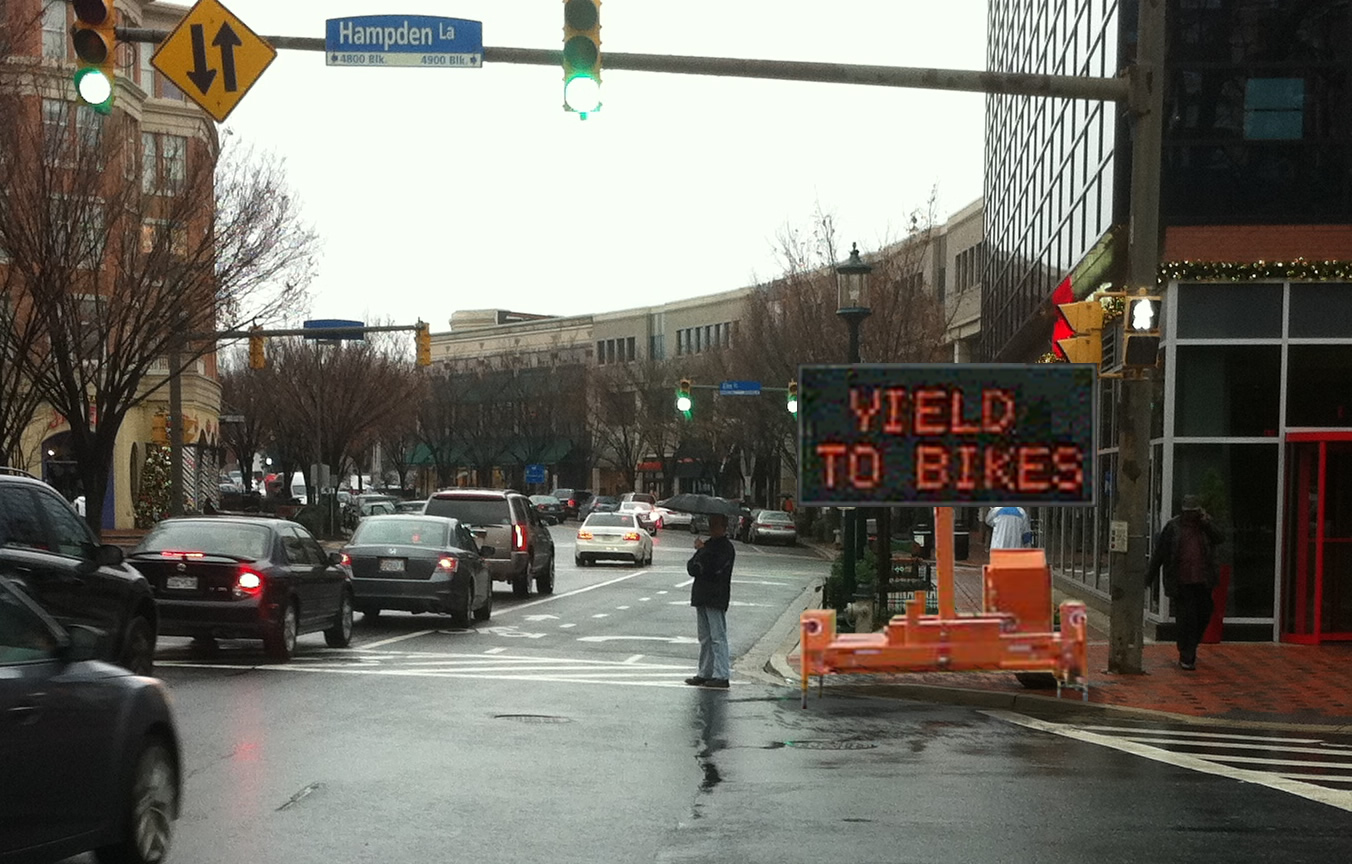 Ultimately we probably did the right thing in the striping plan by providing a gap in the bike lanes where cyclists could cross over to the left.  But part of me thinks that a bike lane to the right of the travel lanes even across Elm (maybe with dashed lines guiding cyclists through the intersection) wouldn’t be so bad if everyone were sufficiently warned of what to do.  Instead of making riders merge into a moving stream of cars,  this solution establishes that the cyclist has the right of way through signage and gives him/her a place to stop if it’s not possible to merge right away.  Call me a heretic, or maybe just pragmatic.

(By the way, I never asked for the bike lanes on Woodmont!)