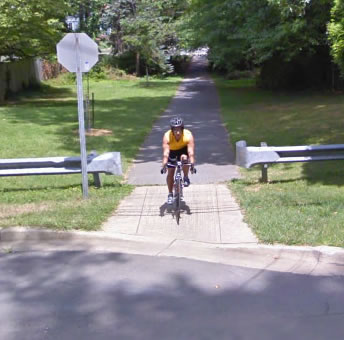 Update (March 10, 2012):  WABA and MoBike just officially asked the County Executive for a 50% increase to this program.  That would bring it to $825K.  The budget is actually out of his hands, but he can affirm his support.

Cyclists, please write to the County Council asking them to maintain current funding of this program.

Councilmembers, please listen to the cyclists writing to you!

The ABP is a critical county program that funds small scale bikeway improvements, design work and planning studies related to bikes.  Individual projects funded by the ABP must cost less than $300,000.

The ABP is highly cost-effective because it makes many small but important fixes.  It funds inexpensive connector paths (like the path shown to the left) to fill gaps in the overall bikeway network, making the network much more effective for marginal cost.   Some of the projects are such low-hanging fruit that it would be a crime to let them go undone for lack of APB funds.  This includes re-striping existing roads to accommodate bikes — about 1/100 the cost of building a parallel bike path.   It covers the cost of preparing grant applications that bring in external funds.  The APB also funds exploratory design work on potential future projects, a boon to flexibility and efficiency.  The fund gives DOT and the bike community the flexibility to make improvements without having to go through a big approval process.

The total annual budget for the program is $550K per year, but the County Executive’s new budget calls for this to be reduced by 9% to $500K.  The cut is penny-wise but pound-foolish.  It would be better to increase the program and delay an $8M bikeway project by mere months.

The name of the program is confusing because the great majority of DOT’s bike-related work isn’t done under the ABP.  The county may rename it something like “Small Bikeway Projects” or “Miscellaneous Bikeway Improvements”.  Let me know if you can think of a better name.  Then I would use the unadorned name “Bikeway Program” to encompass everything DOT does for bikes (not a particular budget item), with its own program lead and list of projects and responsibilities.

Here’s some projects that were done (or will be done) under the ABP.  (Disclaimer: The county bike coordinator just retired and her bike-friendly boss is on leave, so I haven’t been able to verify every fact here).