Various gaps need to be filled in on the bike route along Rt. 355 between Tuckerman Lane and Strathmore Ave, and on Strathmore Ave (MD 547) between Rt. 355 and Kenilworth Ave.  The gaps consist of either unsuitable sidewalk or marginal shoulder.  Here I discuss the gaps and how to fix them.  The route serves Metro and is part of a much longer bike route, a 12-mile signed route from Potomac to White Oak.  Most of that longer route is on-road, but some consists of off-road paths.

Skip to the bottom of this post for a summary of what must be fixed.

For the first 200 feet north of the Rt. 355/Tuckerman Lane intersection (i.e. Grosvenor-Strathmore Metro), the route is just a sidewalk on the east side of Rt. 355.  That sidewalk is right up against the roadway curb, and so it’s neither safe nor pleasant. 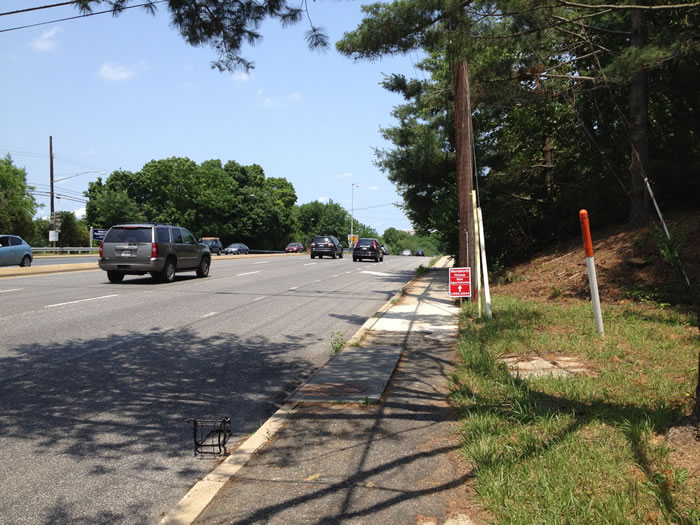 Sidewalk along Rt. 355 just north of Tuckerman Lane (on east side)

Then the sidewalk becomes a wider and safer shared use path.  The path follows 355 to Strathmore Ave., then turns right onto Strathmore, staying on the south side of Strathmore: 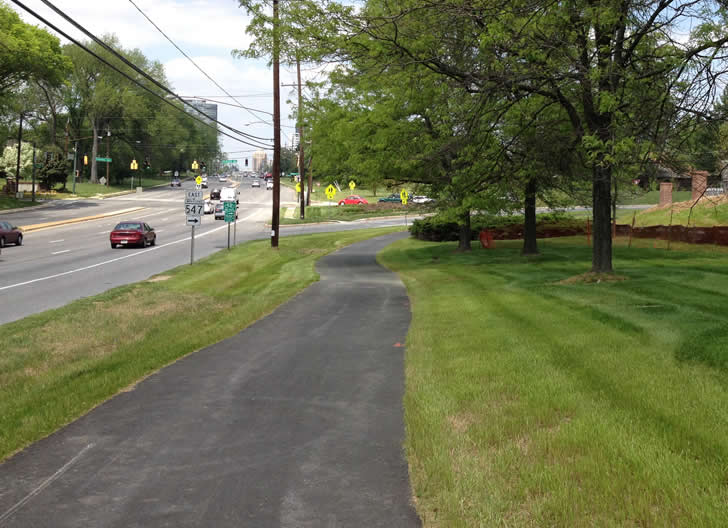 Good shared use path at the corner of Rt. 355 and Strathmore Ave.

Once east of the Symphony Park development along Strathmore Ave., the path becomes a sidewalk again, including a narrow footbridge.  This creates conflicts between cyclists and pedestrians.  A lot of Holy Cross Academy students use the sidewalk as you can see below.

Looking towards the narrow bridge and sidewalk on Strathmore Ave. The sidewalk ends at the driveway you can see in the distance.

After 200 feet this sidewalk ends at the Holy Cross Academy entrance (opposite Stillwater Ave) .  Then there’s no more sidewalk on the south side of the street, but a marginal shoulder begins, which eastbound cyclists can use.  The shoulder goes on for about 0.4 miles. 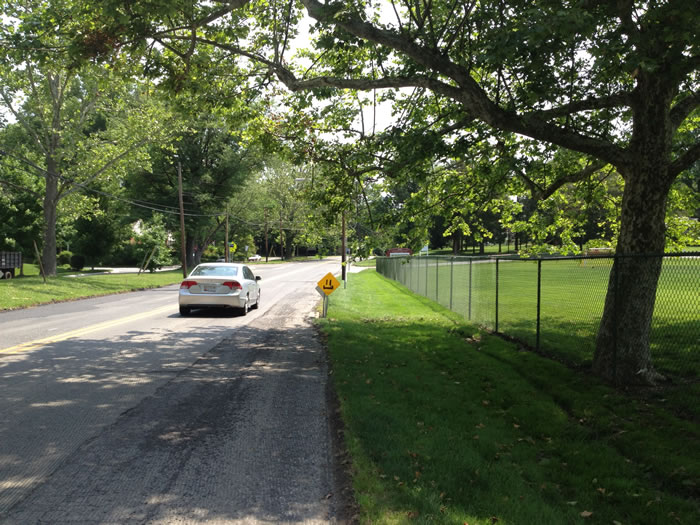 There’s also a shoulder on the other (westbound) side of Strathmore, but it’s unclear why cyclists would use it since there’s a service road on that side.  The westbound shoulder has a few problems, such as this bus stop pad encroaching into it.  We’ve asked the county not to do this in the future. 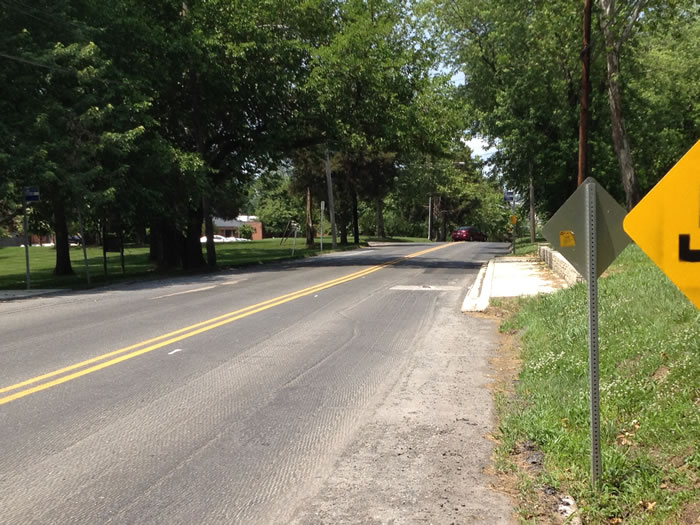 Less than two weeks ago the road was milled and all the lines were removed as you can see in the photos.  Now is the opportunity to widen the shoulders through better striping (by narrowing the travel lanes).

The county’s intention is for cyclists use the service road instead of the shoulders.   But this forces cyclists to make two crossings of Strathmore (at Kenilworth and Stillwater) and eastbound cyclists should not have to do this.   It’s reasonable only for westbound cyclists.

Finally, for the last 150 feet between the Garrett Park boundary and Kenilworth Avenue, the shoulder disappears and cyclists have to merge into traffic (which can be busy) until they reach Kenilworth where the bike route turns right into the residential neighborhood.   It’s treacherous.  It can’t be that hard to build 5 feet of additional sidewalk to connect the shoulder to the existing sidewalk.  These two photos show the gap:

The point where the shoulder ends, about 150' short of the turn onto Kenilworth Ave. where the bike route continues

Where the sidewalk ends without connecting to the street (how hard can it possibly be to connect them?)

There are some steep but useful shortcut paths through the Strathmore Music Center/Mansion property.  But they don’t avoid any of the sidewalks or shoulders.  You might wonder whether you could ride through the Strathmore property all the way to Tuckerman Lane.  But then you’d face this daunting ramp from the arts center down to Tuckerman Lane, and you still wouldn’t have reached Rt. 355.

So to summarize, here are the route’s problems and needed fixes.

Problem: The 200 feet of “path” along Rt. 355 north of Tuckerman Lane (abutting the Strathmore Music Center/Mansion property) is just a sidewalk and it’s right up against the curb.  This is the most critical problem.  The fix: You could widen the sidewalk and move it away from the curb, but it would require building a retaining wall.  An interesting and much less expensive solution would be to simply eliminate the merge lane from Tuckerman onto northbound Rt. 355 (by marking it off with posts).  The lane hardly seems necessary.  Eliminating it would create an ample buffer between the sidewalk and the travel lanes.  You can see the merge lane in the photo.

Problem: The 0.4 miles of eastbound shoulder cyclists would use on Strathmore between Stillwater and Kenilworth is in the process of being resurfaced. The fix: Make sure the pavement is smooth to the very edge and restripe the road to narrow the travel lanes and widen the shoulders.

Problem: The shoulder disappears about 150′ before Kenilworth Ave, with no way onto the sidewalk.  The fix: Create a short extra bit of sidewalk that connects to the shoulder.  Unfortunately that change was opposed by Garrett Park which is afraid it will encourage people to cross the street there.  That seems a bit ridiculous to me.  I suppose you could start the sidewalk much earlier, at Flanders Ave, and cyclists could access it from there, but that would require a lot more expense.

Problem: The roughly 200 feet of sidewalk along Strathmore Avenue between the Symphony Park development and Stillwater Ave. is, well, just a sidewalk, including the narrow footbridge. The fix: Probably not worth the cost to fix, but widen the sidewalk.

Why so many problems?  The state, county and town of Garrett Park all decided that cyclists could use the service road and cross Strathmore Avenue twice regarding of which way they’re traveling.  They removed all the shoulders within the town of Garrett Park, including the short section east of Kenilworth.  The county didn’t press the developer of posh Symphony Park to widen (or pay for widening) the sidewalks more than an inch beyond its little domain.  Construction of the Strathmore Arts Center didn’t include widening of the sidewalks abutting its property.