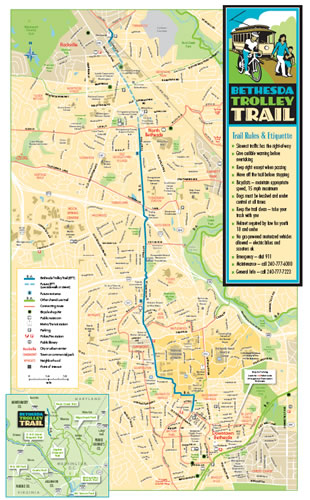 The Bethesda Trolley Trail promises to be a great route from the Twinbrook Metro station in Rockville to downtown Bethesda.   The existing part of the trail is excellent thanks to the two trail bridges over I-495 and I-270.  But it has its problems:

1. The trail fizzles out north of Edson Lane in North Bethesda.  This portion is labeled “future trail” on trail maps, although the small green trail signs continue all the way to Twinbrook Metro.  Much of it is sidewalks on busy roads lined with shopping center driveways, although there are decent alternatives for those who don’t mind riding in the road.

2. The trail fizzles out south of Charles St. in Bethesda.  Much of it is sidewalk along Old Georgetown Road with no buffer between the sidewalk and the curb.  The trail through NIH is off-road but narrow.

3. Between these areas are some lesser issues like poor pavement quality.

See this this sequence of photos depicting the trail.  They are geo-tagged, a cool Google feature.

Here are the major problems as I see them, in northbound order:

1. The trail along Woodglen Drive is  essentially a wide sidewalk in front of busy Whole Foods and crosses several parking entrances (at least it’s wide).  The county is moving it to the other side of the street.  Hooray!

2. The signed trail then follows Nicholson Ln. and Rt. 355 to the White Flint Metro station, which is the most dangerous stretch.  Instead of following that, cyclists are much better off riding straight through the shopping center north of Woodglen (the one with FedEx, McDonalds, etc.) to get to Metro.  But the parking lot can’t be the official signed route or else a pack of lawyers would descend on you before you could clip into your pedals. 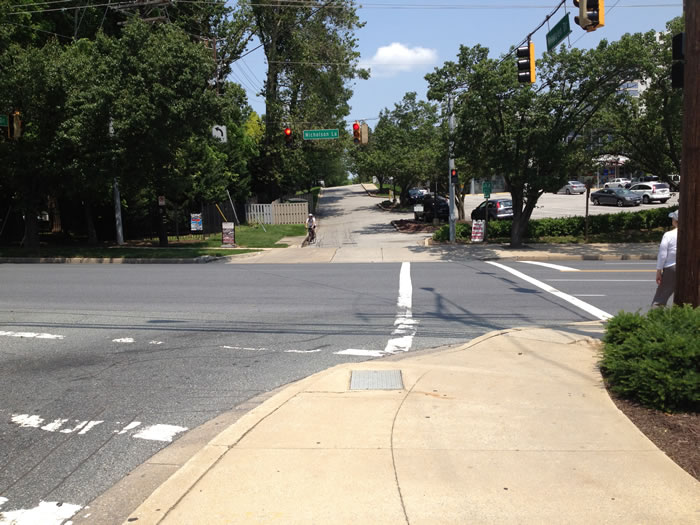 Looking into the parking lot north of Nicholson Lane

3. The trail follows Rt. 355 north of White Flint Metro for awhile, as path in some places, sidewalk in others. 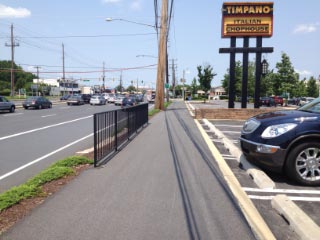 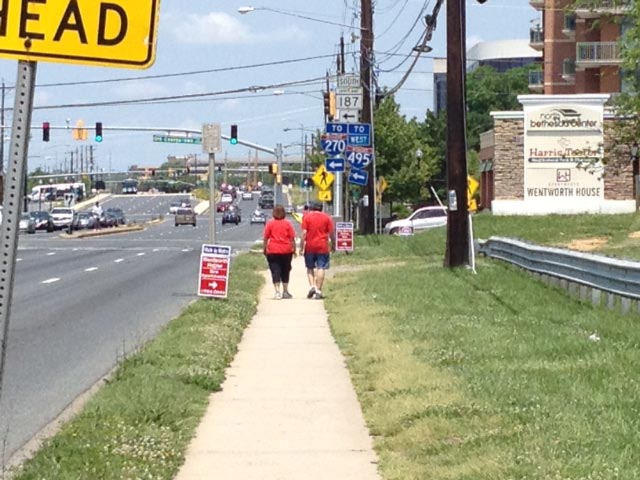 4. The trail turns right onto Bou Ave. and then left on Chapman Ave. — as sidewalk — to Twinbrook Metro.  The Chapman sidewalk could probably be widened (at considerable cost), or a competent rider can use the roadway. 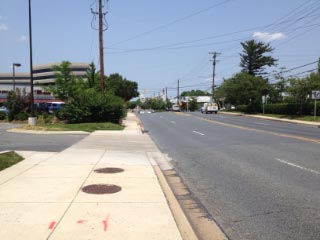 One bright spot: The trail could be rerouted behind the Montrose Crossing Shopping Center (Target, Old Navy, etc.) instead of in front of it using the existing paths on Randolph Road and Nebel Street, avoiding a great number of driveways. 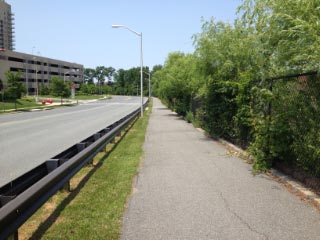 My priorities are simple: Just keep building north, one section at a time.  First, sign the route through the FedEx/McDonalds parking lot (lawyers, I know).  Second, finish the trail to Randolph Road (and the Montrose Parkway Trail).  Third, finish the trail on Chapman to Twinbrook Metro.

You could make a case that the trail should simply end before it gets to Chapman Road with all its problems.  If Rt. 355 is redeveloped in that area, maybe the trail could be built along 355 instead of Chapman.