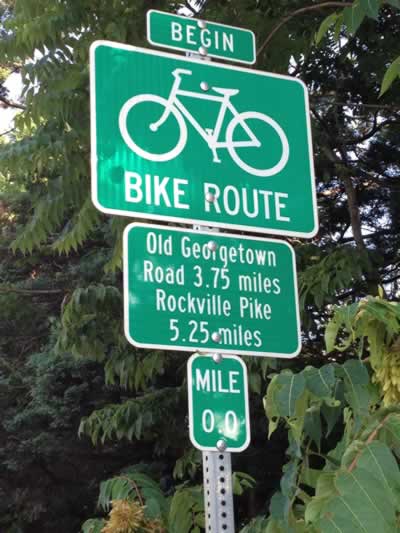 Montgomery County intends to put bike route signs along so-called “spine routes“, i.e. long routes for bikes that allow travel to other parts of the county as well as to key destinations like town centers or Metro.   Each spine route will have a start and finish, a set of mileposts and ultimately a number or other designator (once we figure out a designation system).  Rockville has a similar system of routes within the city limits, and has already posted signs along them.

An original spine route concept for the county was developed by MoBike and MCBAG and includes many routes (probably too many).  The routes are generally meant to be roadways or high quality trails (Capital Crescent Trail), but sometimes they’re sidepaths.  Here’s the concept map (click to enlarge): 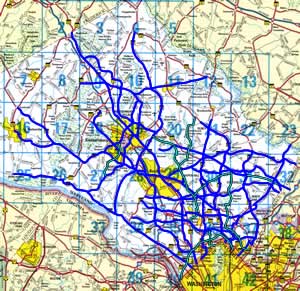 With that concept in mind, the county is defining and signing spine routes as it goes along.  The first (and only) route to be signed connects Potomac to Rt. 29 in the east county via Tuckerman Lane, Strathmore Ave, Knowles Ave, Plyers Mill Rd, Dennis Ave, and several smaller streets.   I call it the “Tuckerman/Plyers Mill” route for lack of a better name.

What kind of signs should be used?

There are several flavors of signs on the Tuckerman/Plyers Mill route.   Most are variations on the standard green bike route sign.  Among the most useful are those indicating two destinations (or landmarks), including the next destination and another one further away, with the distance to each.

Here is the bike route sign at the beginning of the Tuckerman/Plyers Mill route:

Destination signs should be spaced throughout the route.  Every major destination should have a few signs pointing to it.  Here are a couple good examples.

Destinations off to the side are indicated by a route sign with arrows pointing left or right towards other destinations.  It needs to be clear that the main route continues straight ahead also.  This example falls short in that regard, but otherwise it’s a nice sign: 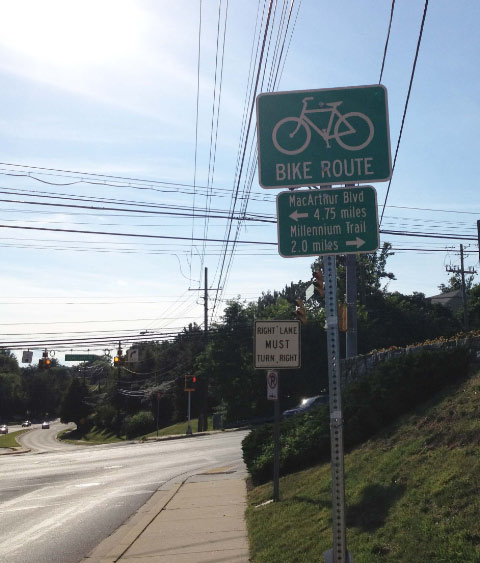 Sign to side destinations (needs a forward arrow though)

At one location there is a split in the route because there are two alternate routes, one via a cut-through path and one on the road.  The two alternatives merge back together a half mile later.  Both are quite useful for different reasons, so signs point to each.  Here is the sign at one end of the split, at the intersection of Plyers Mill Road and Summit Ave: 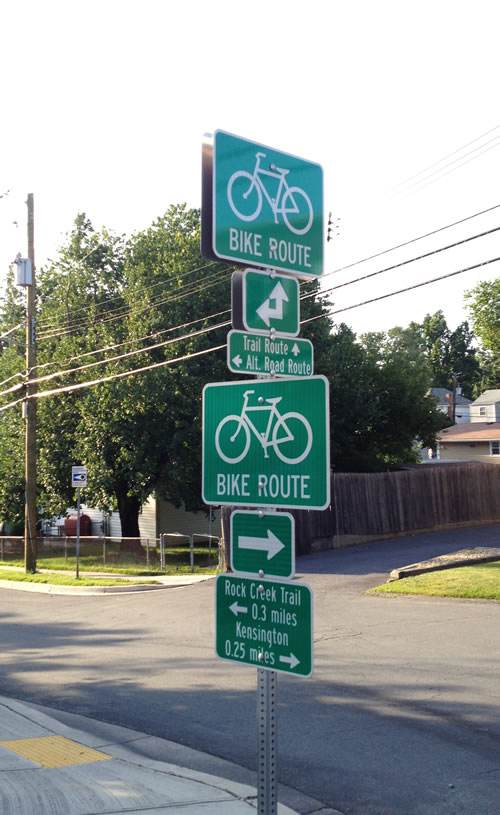 One could argue that the sign is so complicated that the route should just follow one alternative or the other.

Some signs say just “bike route” together with the mileage from start of the route.  These mile markers give the rider a sense that he’s on an actual coherent route.  They should be spaced throughout the route. 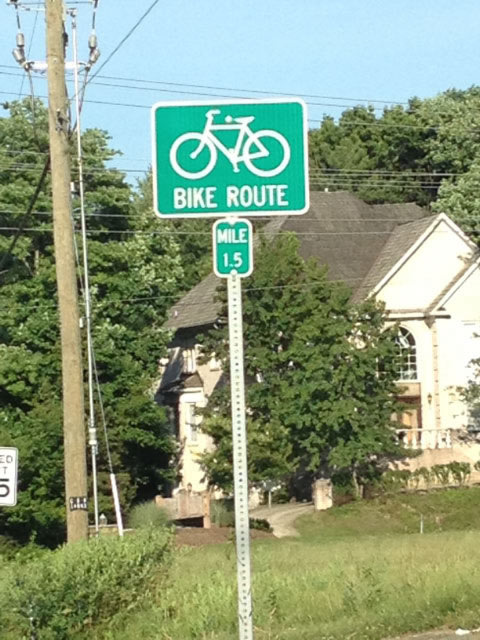 Some signs are purely directional: 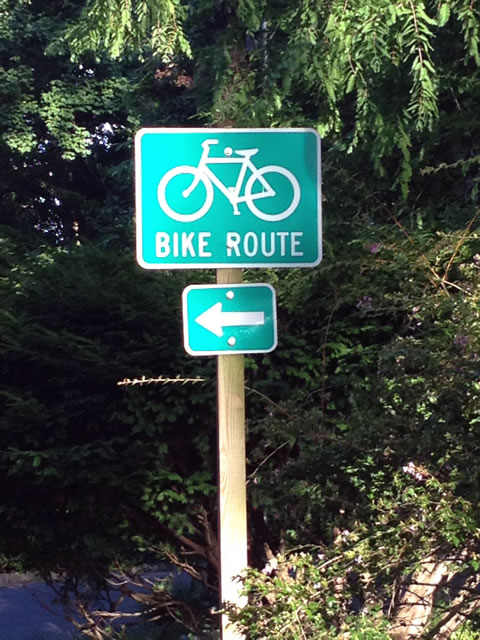 Finally, some signs are placed on a perpendicular street or path to alert riders that they’re at a junction with the spine route.  The following sign is on the Bethesda Trolley Trail where it crosses the Tuckerman/Plyers Mill route (at Tuckerman Lane): 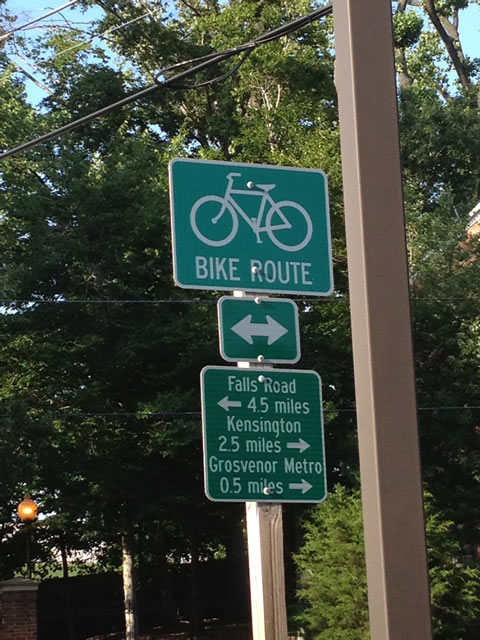 Some signs might be overkill.  This sign on Beach Drive is just one of several route/trail signs at the same intersection: 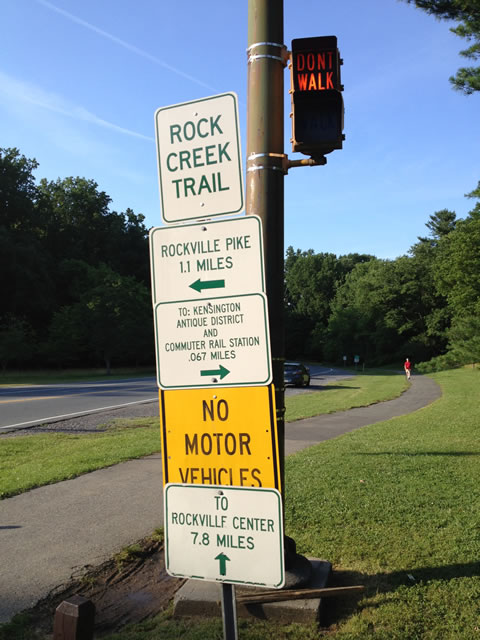 A few signage issues still remain.   One question is how do you sign places where the suggested route is a sidepath, and especially transitions from the road to the path?   Do you add a panel saying “sidewalk” or “on sidewalk” on the bike route sign post?  Would that imply to drivers cyclists shouldn’t be in the road?

Using names, numbers or colors to designate spine routes would help riders see that they’re on a long identifiable route. 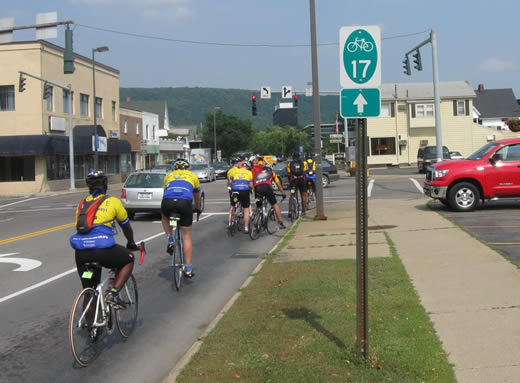 Rockville uses a system of colors which are indicated by small circles on the sign.  It’s hard to distinguish between similar colors, and you run out of colors quickly, so I think the lesson here is that colors don’t work very well.

Often names are given to trails.  Naming every spine route in the county would be absurd, but some road routes around the U.S. are given names of historical or cultural significance.  Names add special emphasis and tourist appeal.

Up next:  What roads should make up the three new spine routes that the state has agreed to fund this year?  These two routes follow Rt. 29, Georgia Avenue and various Bethesda streets, respectively.

Note: If you post a comment and it’s not approved within an hour, please send a blank email to email@mobike.org with the subject “approve”.  WordPress is having difficulties – sorry for the inconvenience.

2 Responses to “A few spines short of a skeleton”