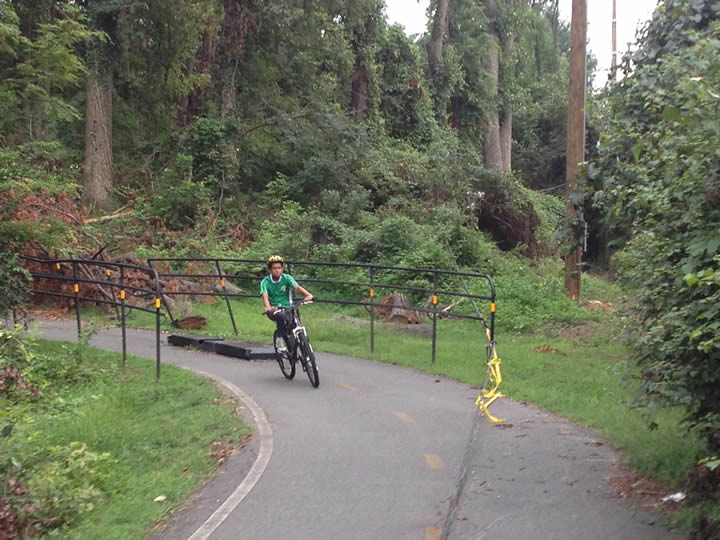 Downed wire blocking half the trail

There are several major hazards on the Bethesda Trolley Trail bridges over I-270.  Check out this photo album of the trouble spots.

The worst hazards are related to the Derecho storm that hit the D.C. area on June 29th, 2012.   The problems include:

All of these hazards have been reported to the Montgomery County Department of Transportation (MCDOT) but the wire and folded down bollards remain.

In addition, some problems pre-dated the storm:

Trail bollards around the country are most often used to keep cars from entering the trail.  This should only be done where there’s a history of drivers entering trails, and only if no other means of preventing such entry is possible.  As FHWA guidance notes:

Bollards can be difficult for cyclists to maneuver around safely, especially for novice riders.  They may be hard to see right away, especially at night.  They sometimes get knocked down (or are folded down), creating an obstacle in the pavement that’s low and especially difficult to see.

Where bollards must be used, they need to be clearly visible and reflective, even if folded down.  They should be narrow, not wide.  Per FHWA guidance, they should never be used where they’re difficult to see in advance, such as on curves in the trail.  It’s recommended that lines be painted on the pavement that split and go around the bollard on each side.  Unfortunately the bollards at the BTT bridges are much wider than necessary and many are positioned around curves where sight distance is poor.

Folding bollards are a special problem because they’re often not returned to the upright position.  Wherever possible, maintenance and emergency vehicles should be given another way to get onto the trail, such as mounting a curb or driving on the grass.

This presentation on bollards by California transportation experts  (in turn cited by he FHWA) provides many recommendations, including the recommendation that national standards prohibit folding bollards.

In the D.C. region,  CommuterPageBlog has written a nice piece on bollards.

Clearly the bollards on the BTT bridges were installed for some purpose besides just keeping cars off the trail.  The second bollard on each bridge approach can’t even be reached by car since the first bollard prevents cars from entering.  Some of the bollards aren’t located where cars would enter anyway.

So at least half the bollards must have been installed to keep cyclists on their side of the trail or to slow down cyclists.  Where is the standard that calls for bollards to be installed for those purposes?  Surely placing bollards, especially around sharp curves, creates a hazard that outweighs the risk of collision with oncoming traffic.   Center lines can tell cyclists everything they need to know.  As for reducing cyclist speeds, using path obstructions to slow down bikes is a terrible idea that only makes things more dangerous.  Traffic calming to slow cars, like curb bumpouts, are pretty easy to navigate for licensed drivers and put drivers at very little risk of personal harm (even if the driver is dumb enough to mount the curb) yet protect more vulnerable users like pedestrians.  But “bike calming” bollards, gates, slaloms and humps endanger cyclists who are the vulnerable users, and can be especially difficult for less experienced cyclists to maneuver through safely.

So most if not all of the bollards on the Bethesda Trolley Trail should be removed.