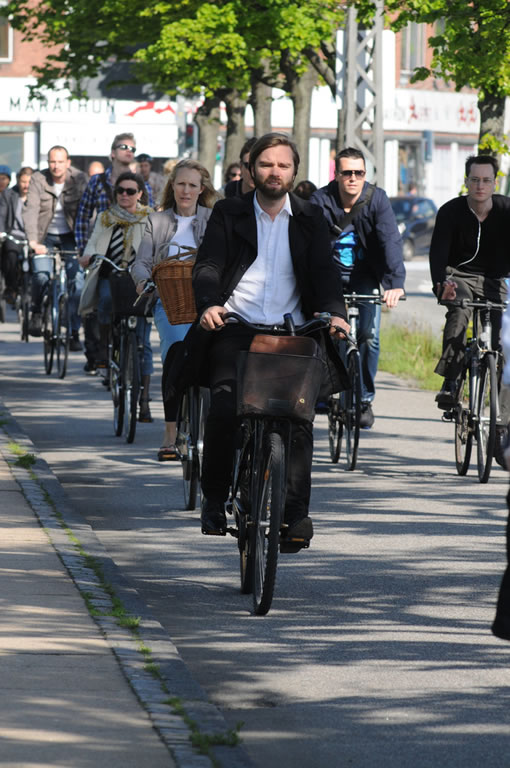 Commuting in Copenhagen. Bicycling is safe, yet almost no one wears a helmet.

A bill before the Maryland House of Delegates would require everyone riding a bike to wear a helmet, no matter how short their trip.    If the bill passes, it would probably kill BikeShare and do a great deal to discourage cycling.  Capital BikeShare, now coming to Montgomery County, is inducing the county to invest in more bike infrastructure and will allow many more bike trips. The county’s transit oriented communities (including Bicycle and Pedestrian Priority Areas designated by the state) rely on bicycling and walking to reduce traffic.  But this bill would undermine it all. Update on April 25 2013: The bill did not pass.

Do Maryland legislators really think they know more about bicycling than the Danish and the Dutch?
In Copenhagen, 36% of all commuting trips are by bike.  In Amsterdam, 29% of trips across the city are by bike, 43% in the city center (more here).  These are large cities.  Yet very few Dutch and Danish riders wear helmets, which are seen as seen as inconvenient and discouraging to cycling.  And there are far fewer bike fatalities per rider in those countries than in the U.S.  See the Danish City of Cyclists video, which says it all.

Mandatory helmet laws are a BikeShare killer.  Who is going to plan a half day ahead and bring a helmet in case they might use BikeShare for an impromptu lunchtime trip?  And you’ll have to carry your helmet at your destination.  A lot of BikeShare users (or other riders) aren’t going to lug around a helmet for 30 minutes in order to make a 5 minute trip to the store.

Consider this scenario. A rider lives in a smart growth community developed to support biking, walking and transit.  He or she lives one mile from a Metro station, most of which is bike path or sidewalk.  At a 4 mph walking pace, that’s 15 minutes.  At a 10 mph biking pace, it’s 6 minutes.  So you bike, right? But if you board Metro with a helmet, you double the things you have to carry on a crowded train, assuming you have a purse or briefcase, so you give up the 9 minutes savings.  However, that makes driving 9 minutes more attractive relative to transit.  So you drive to work.

The Washington Post cites statistics that are either misleading (percentages are a tricky thing) or based on poor studies.  I’m upset that I have to point this out.  I want people to wear helmets, not send them mixed messages.

According to a much better New York Times article:

A two-year-old bike-sharing program in Melbourne, Australia — where helmet use in mandatory — has only about 150 rides a day, despite the fact that Melbourne is flat, with broad roads and a temperate climate. On the other hand, helmet-lax Dublin — cold, cobbled and hilly — has more than 5,000 daily rides in its young bike-sharing scheme.

Statistically, if we wear helmets for cycling, maybe we should wear helmets when we climb ladders or get into a bath, because there are lots more injuries during those activities.

The same article notes that the European Cyclists’ Federation says that bicyclists in its domain have the same risk of serious injury as pedestrians per mile traveled.

Three decades ago, a very close friend of mine went for a long bike ride on a sunny morning in Florida.  Later that day he was involved in a vehicular crash where he received a serious head injury… subdural hematoma, two weeks in the hospital, 6 lost months, and some lifetime effects.  He was not wearing a helmet — because he wasn’t on his bike, he was driving a car.  Where are the car helmets?

WABA has provided many detailed arguments against the bill.  MoBike and WABA need your help to push hard against the bill.  Legislators need to hear many many voices against this bill!  You can testify Tuesday in Annapolis, or you can write to your state Delegates and/or Senator:  determine your district, identify your delegates and senator, and get information on bills (and specifically House Bill 339).

Note: Comments posted on this blog are unmoderated except for the first comment by an individual, which must be approved by the moderator (to prevent spam).