Montgomery County DOT is proposing to add bike lanes to Marinelli Road in North Bethesda.  The bike lanes would be added between Executive Blvd. and Rt. 355 and would be at least 5 feet wide.  Adding bike lanes would be accomplished by narrowing the existing travel lanes to as little as 10 feet (sometimes called a “lane diet”) as follows (click on photo to zoom): 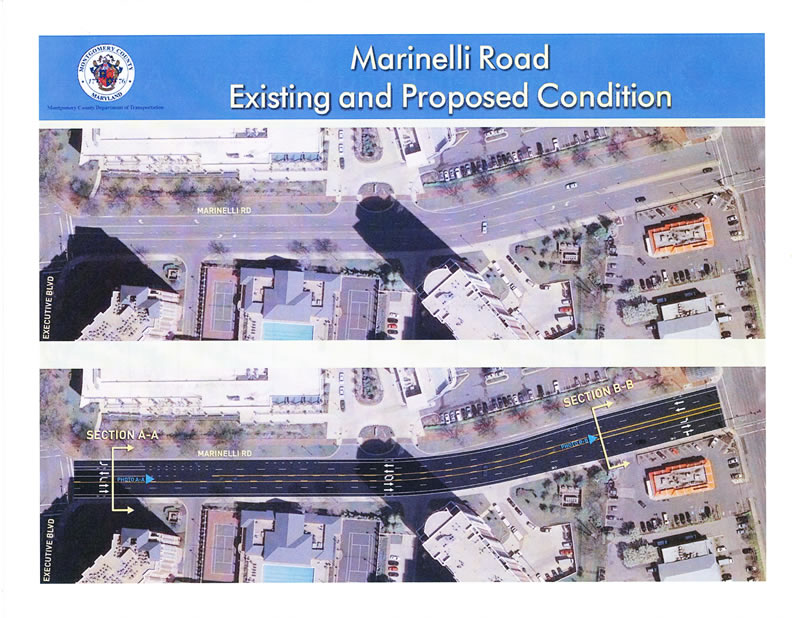 MoBike requested this improvement after reviewing the White Flint Sector Plan, a template for the massive redevelopment occurring the White Flint sector.  The plan calls for far too few bike lanes on streets in the White Flint sector, including Marinelli Road.   Ironically it’s much easier to add bike lanes to an existing street in the sector than to a street that hasn’t been built yet, because for new streets the plan is very specific about pavement width, number of lanes, sidewalk features, etc.

It’s crucial to add these bike lanes now before redevelopment creates pressure to add or remove lanes or add parking or modify sidewalks in ways that could forever prevent bike lanes from being built.  The best window is right now, since the roadway is going to be resurfaced in the next few months.

The following diagrams show cross-sections and mock-up photos of the proposed changes.  Section “AA” (see satellite view) is relatively easy to restripe to include bike lanes while keeping the existing travel lanes: 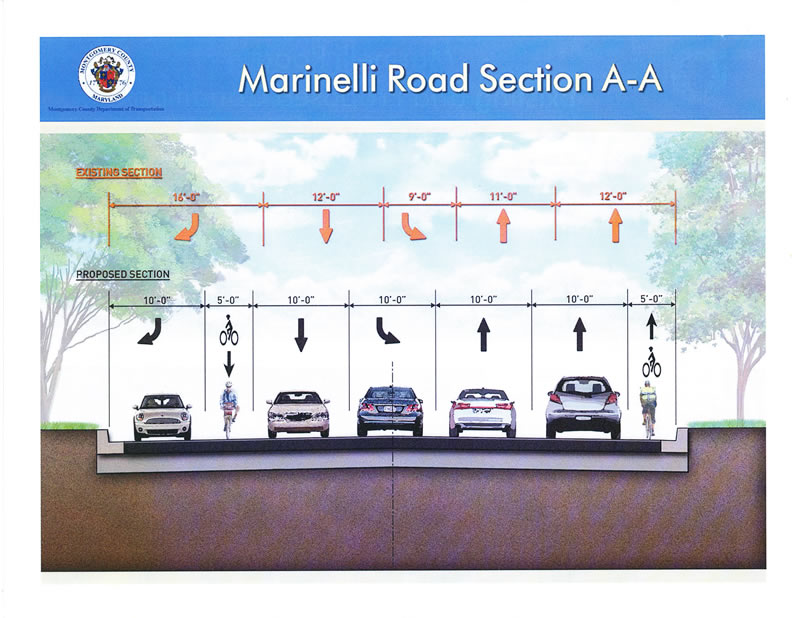 Kudos to DOT for their willingness to narrow the travel lanes to 10 feet.

But section “BB” is a challenge.  That’s because there isn’t enough room on the south side of the concrete median to provide two travel lanes and a bike lane.  DOT’s solution is to simply end the bike lane (with an “open” end) while the right-hand travel lane flows into the straight/right turn lane.  The straight/right turn lane would be 12′ wide.  DOT would paint sharrow symbols near the curb.

Unfortunately this forces cyclists to merge into right-hand lane traffic at the end of the bike lane or else get forced into the curb.  The cyclist has nowhere to go if he can’t merge in time.

If the DOT solution is adopted, the sharrows must be placed be in the center of the lane, not near the curb, because cyclists are safer taking the lane. (The sharrows may be accompanied by Bikes May Use Full Lane signs).  As far as lane width, a 12′ lane is too narrow to share side-by-side safely but too wide to make that fact obvious to drivers and cyclists alike.  A lane of that width leaves it unclear to some drivers whether they can pass a cyclist in the same lane, leading to driver anger when the cyclist takes the lane.  An 11′ lane is much less likely to have that problem, so DOT should make the right-hand lane 10′ or 11′ wide.  However, some cyclists prefer 12′ over 11′ (it is physically possible to share a 12′ lane with smaller vehicles).

Another solution is to change the travel lane configuration approaching the intersection with Rt. 355.  The new layout would have the left-hand lane of eastbound Marinelli flowing into the left turn lane, while cyclists and right-hand lane drivers would sort themselves into the two rightmost lanes  after the bike lane line ends.  Sorting could happen in a long stretch without lane lines (first graphic below), or the transition could be made more explicit (second graphic below or something similar).  Drivers would feel they have to merge into the flow of bicyclists, not the other way around.  It’s inferior to removing the median, but surprisingly it works on some other roads.

This does however require drivers in the left lane to change lanes if they want to continue straight, something DOT will probably oppose.

Here’s the Google street view of the section BB (the reverse angle shows a better view).

Whatever happens,  cyclists must tell DOT what they want soon, because the resurfacing project is scheduled to start in month or so.