The draft 2014 Rockville Bikeway Master Plan is ready for public comment!  For details, visit the plan update site or directly view the draft plan and map at these links: 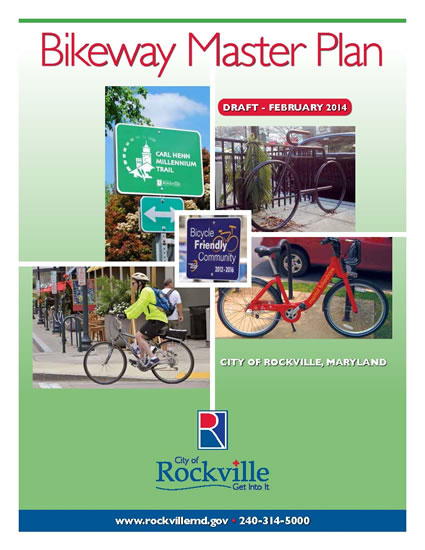 You can comment on the plan in person at a public hearing to be held on Wed. April 9th at 7 pm in the Mayor and Council Chambers, City Hall, 111 Maryland Avenue, Rockville, MD, 20850.  You can sign up to speak by calling 240-314-8200.   Individual speakers get 3 minutes; those representing organizations get 5 minutes.  Or you may provide written comments via email, via this form, or via regular mail (to bike coordinator Kevin Belanger, 111 Maryland Avenue, Rockville, MD 20850).  Planners will formally present the plan to the Planning Commission on March 12 at 7 pm in the Mayor and Council Chambers at City Hall.

The current official version of the plan was last created in 2004.  The city has a strong record on supporting bicycling and most of the recommendations in the 2004 plan were implemented.  It has an effective bike advisory committee (RBAC) on which anyone is welcome to participate.  Among the city’s accomplishments:

General information about bicycling in Rockville can be found on the city’s bikeway page.