Suburban Hospital in Bethesda is undergoing a large expansion, doubling the size of its footprint.  The expansion should allow the hospital to provide more care to the community.  I’m grateful for the hospital’s presence, since members of my family have received excellent care there.

But the expansion removed a block of Lincoln Street that provided an important bike connection between Old Georgetown Road and Grant Street.  Grant St. is a major north-south bike route one block west of (and parallel to) Old Georgetown Rd.  Old Georgetown is the site of the Bethesda Trolley Trail, which is implemented as a sidepath on the east side of the road.  The National Institutes of Health, a major destination for cyclists, is located on the east side Old Georgetown across from the hospital.  So the Lincoln connection was crucial.  This map shows the removed segment of Lincoln, with the hospital in gray: 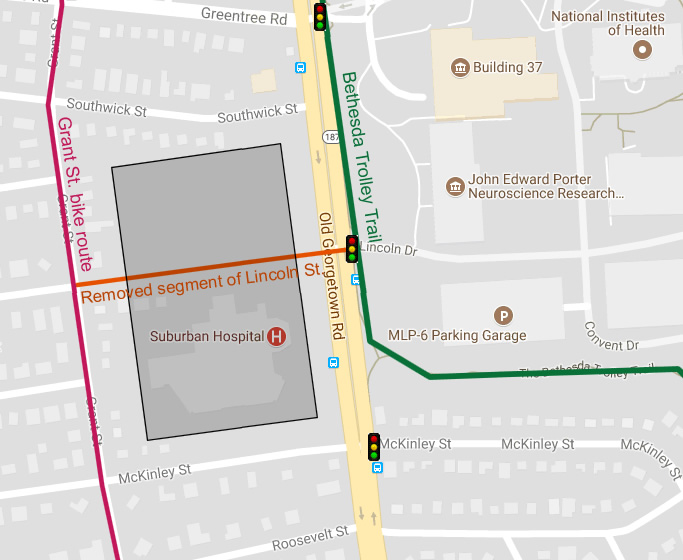 So to replace the closed segment of Lincoln, county planners stipulated that the hospital must build a bike detour route on its property. But inexplicably the planners didn’t require the detour to actually reach Old Georgetown Road!  The hospital is providing a detour path that only reaches Southwick Street.  Here is the hospital site plan with the detour shown in blue: 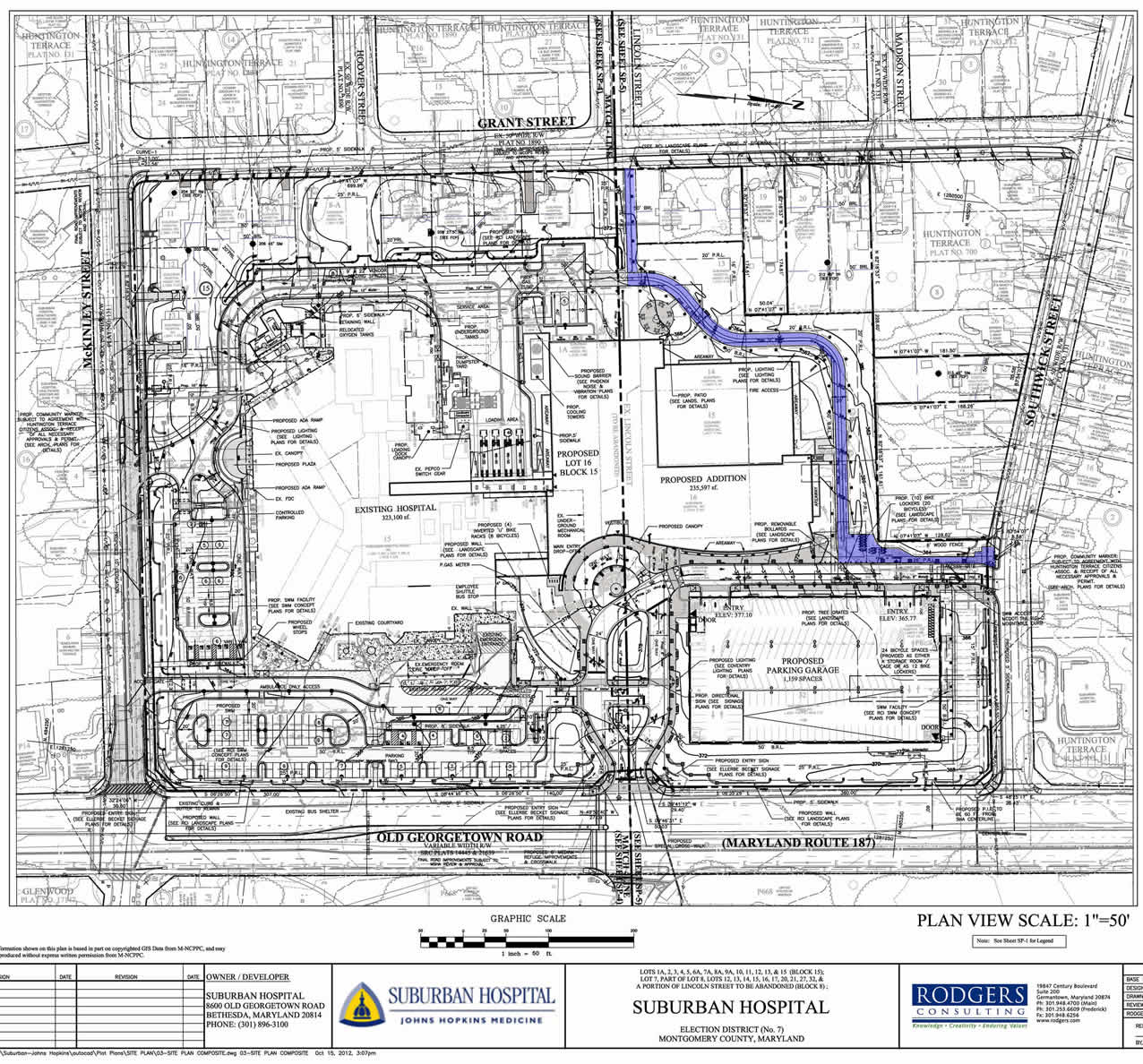 Cyclists can still ride on Southwick (as they always could) but there’s no signal or break in the median at Old Georgetown and Southwick, so cyclists can’t cross Old Georgetown there.  The whole point of having a detour is to get riders to the BTT and NIH on the east side of Old Georgetown Rd.  Cyclists need to be able to get to the signalized intersection where Lincoln previously connected to Old Georgetown, which is now the hospital’s main entrance.

Planners also failed to require wider sidewalks along Old Georgetown or Southwick next to the hospital.  These sidewalks, built (or rebuilt) as part of the expansion, are only 5′-6′ wide, not wide enough to be reasonably shared by pedestrians and cyclists.  If these sidewalks had been constructed as a 10′ wide path, it would have extended the detour path to the signalized intersection, allowing cyclists to cross Old Georgetown safely.  The following diagram depicts that option (widened sidewalks shown in magenta): 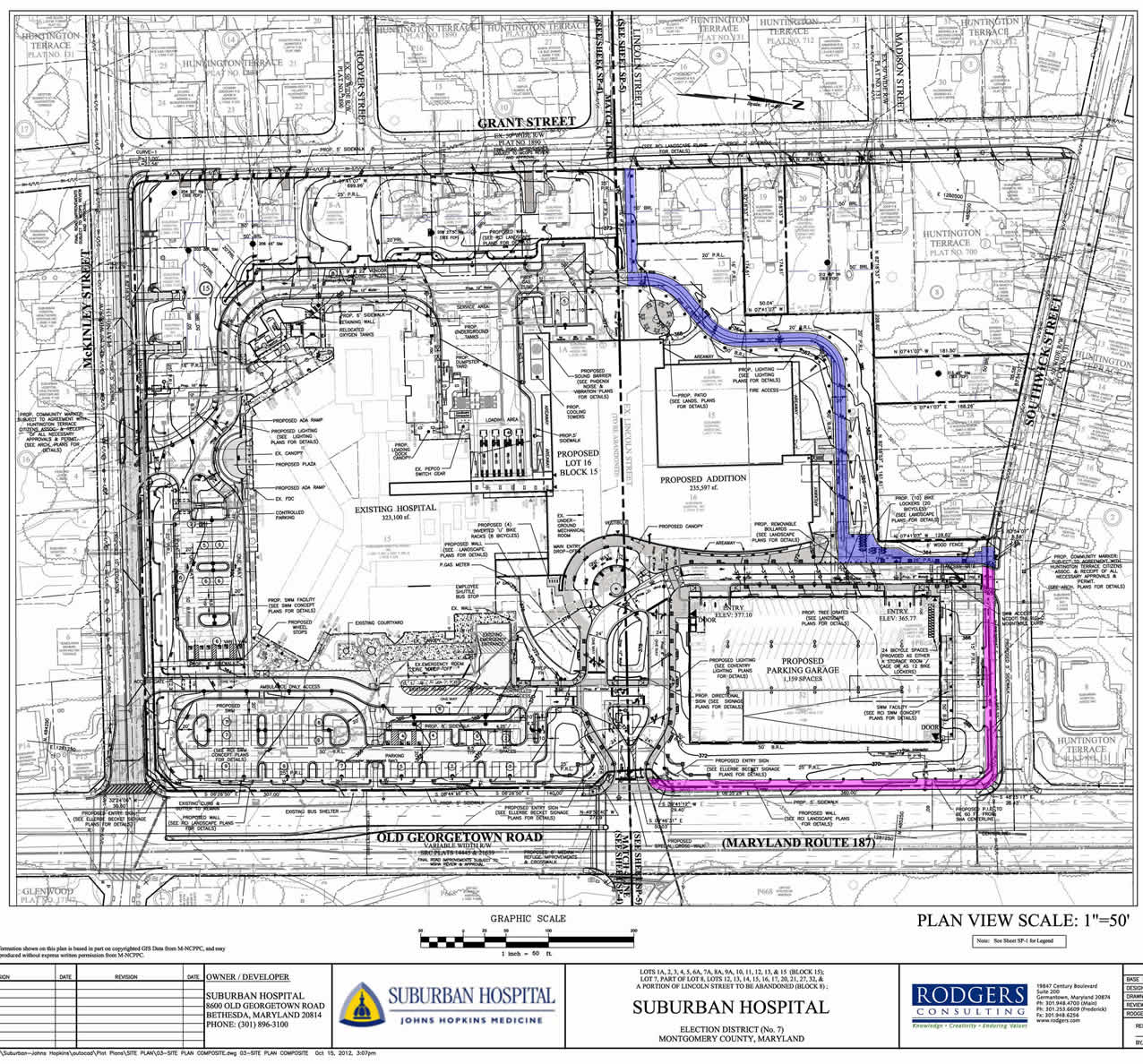 But although the expansion project completely built (or rebuilt) these sidewalks, it did not widen them!

Without any sidewalk improvements, the best detour route for cyclists – if they can find it – is to use the hospital’s internal street to get from the truncated detour path to the light at the main entrance.  It’s not ideal, but if it were signed as a bike route, it would solve the detour problem.  Here is that detour: 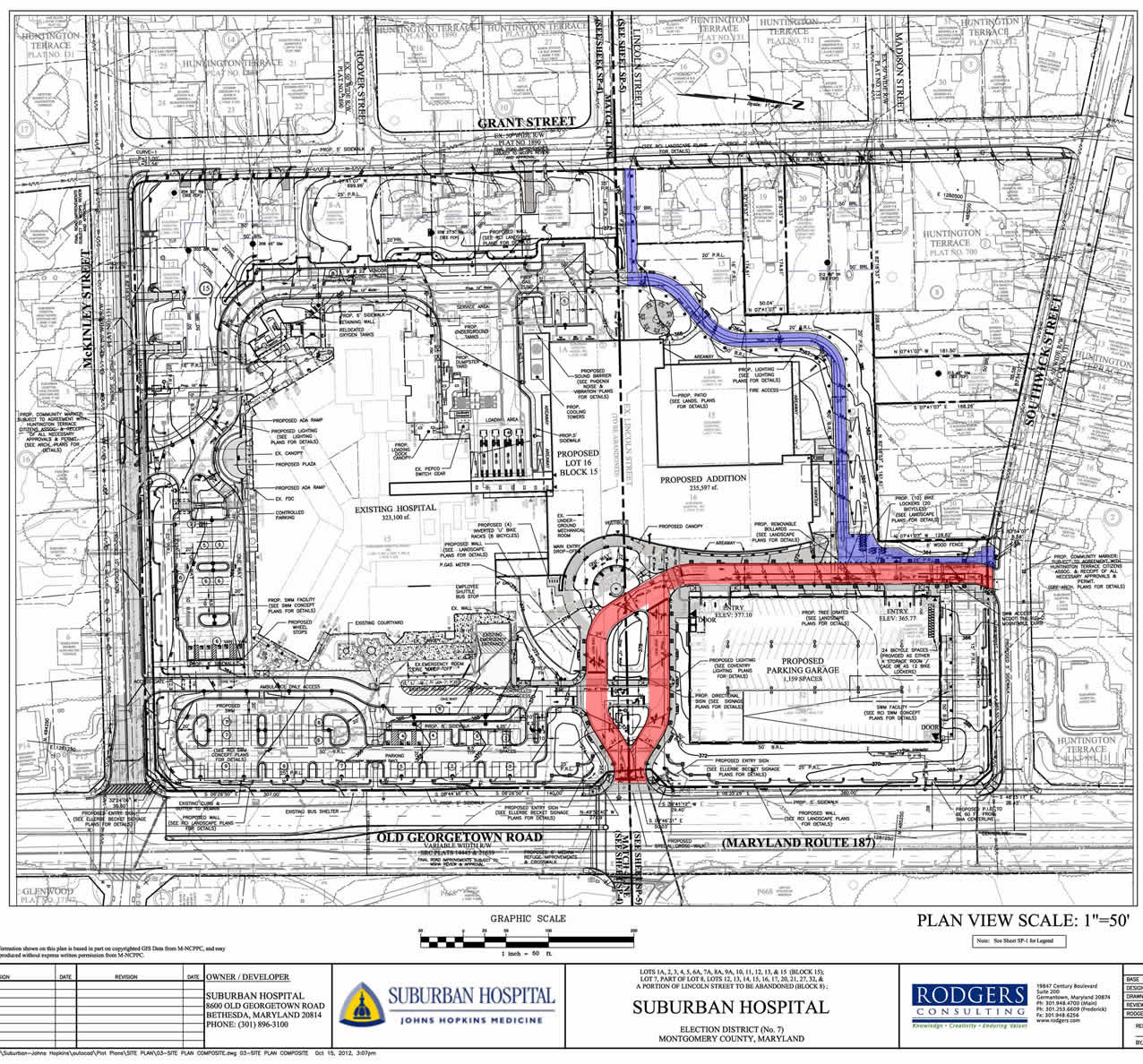 As a related issue, the county should widen the next block of sidewalk to the north (on the west side of Old Georgetown from Southwick to Greentree Road) to provide better access to the Capital Bikeshare station in that block.  This is approximately 120′ of sidewalk.  See more discussion below.

The following map shows the various bike routes for context: The Grant Street bike route to downtown Bethesda; the Bethesda Trolley Trail; the closed segment of Lincoln Street; and a spur route to the Capital Crescent Trail:

The Grant Street bike route is important for cyclists in its own right, linking Democracy Boulevard to downtown Bethesda.  Obviously the Bethesda Trolley Trail is important.  Moreover, there’s a hybrid route that follows the Bethesda Trolley Trail north of Lincoln and the Grant route south of Lincoln.  The BTT south of Lincoln is quite arduous because it’s narrow and full of pedestrians.  Grant south of Lincoln is more direct and comfortable to destinations like Bethesda Row, Bethesda Metro and the Capital Crescent Trail.  So BTT riders may cut over to Grant.  Lincoln was the most convenient way to do so.  Lincoln also linked NIH to neighborhoods to the west.  So Lincoln had bike route signs and was designated in county planning documents as a “shared roadway” bikeway (number PB-22).

In 2013 the Montgomery County Planning Department recommended (and the Planning Board approved) the hospital’s site plan.  On page 3 of its approval recommendation, department staff recognized the Lincoln bikeway and stated that a detour path must be built to replace it.  Specifically, the approval required:

…A 20-foot wide public access easement for a pedestrian path through the subject property between the Grant Street/Lincoln Street intersection on the west and the intersection of Southwick Street and the proposed driveway near the northeast corner of the site, as a replacement for the master-plan-recommended shared-roadway bikeway section along existing Lincoln Street that will be abandoned  between Old Georgetown Road to the east and Grant Street to the west.

This language contradicts itself, calling for a full detour but requiring only a partial detour.  Didn’t planners know cyclists need to get to Old Georgetown Road and cross it?  Did they expect cyclists to use the hospital internal street?  I don’t hold the hospital responsible for this mistake.  It’s the Planning Department’s job to make sure bike accommodations actually serve cyclists.

Cyclists who use the detour path can legally ride on the new sidewalks along Southwick and Old Georgetown to get to the hospital main entrance (formerly Lincoln) in order to cross Old Georgetown at the signal.  Many cyclists were already using the Old Georgetown sidewalk there due to the Lincoln closure.  But as noted above, the sidewalks are too narrow, despite being (re)built in a vast grassy area.  Putting cyclists on narrow sidewalks is bad for both cyclists and pedestrians.  If widened, the sidewalks would’ve extended the detour path to the signal cyclists need to get to, as shown in the diagram above.  No one seemed to figure that out.

Here is the rebuilt sidewalk along Old Georgetown Road: 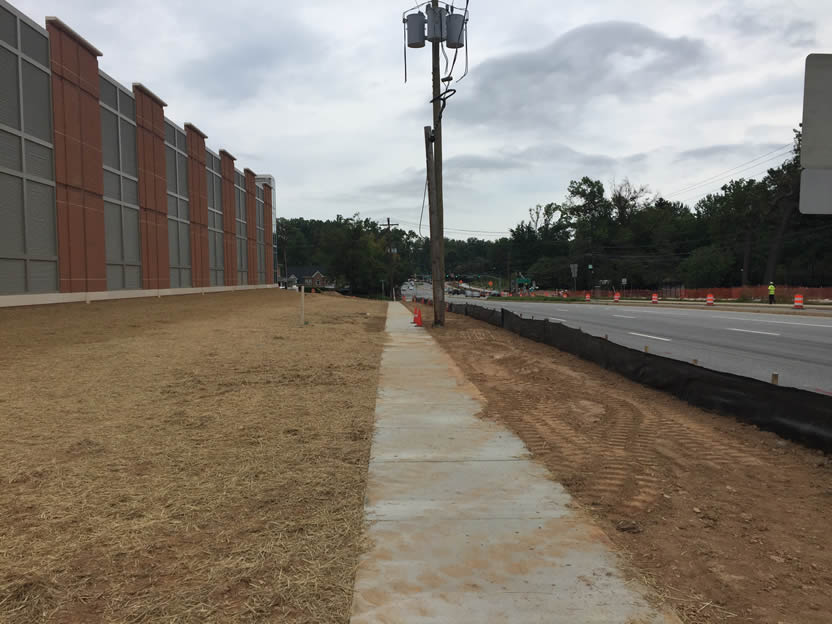 Here is the new sidewalk on Southwick, only partially complete in this photo: 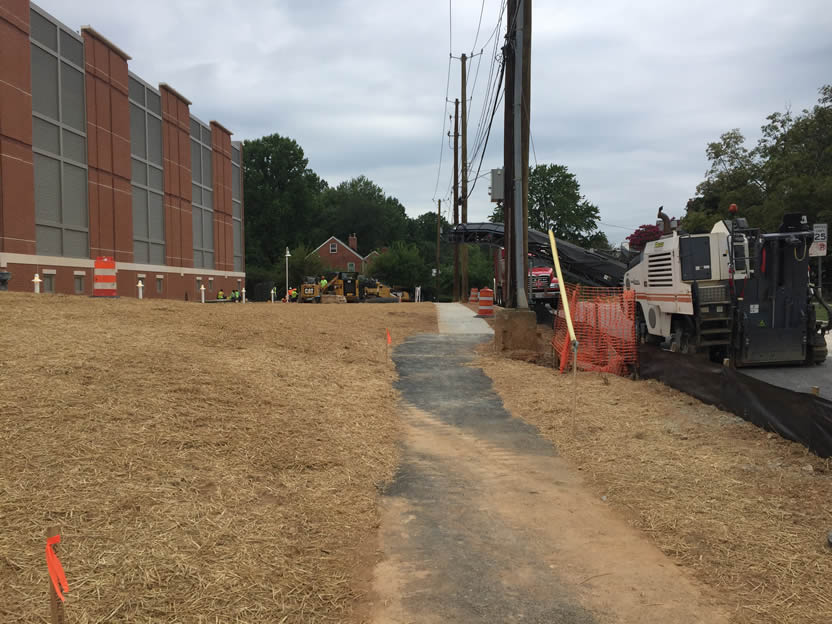 There appears to be plenty of room to widen the sidewalk to 10′ (as asphalt, because it’s a path) or to build a separate 8′-10′ path in addition to the sidewalk.  Adding a separate path might be best, as it would tend to separate bikes and pedestrians, would be further from the street, and would not require tearing out a brand new sidewalk.

DETOUR THROUGH THE HOSPITAL

Fortunately cyclists can still physically ride through hospital property, starting on the detour path and transitioning to the hospital internal road, to emerge at the hospital main entrance, as shown above.   The question is: will Suburban Hospital sanction the internal road as a bike route?  It would require two or three bike route signs in each direction, in addition to whatever signs are posted on the detour path.

The county must sign at least one connection between NIH/BTT and Grant.  Two alternative connections are 1) Greentree Road, and 2) Sonoma Road.  But Greentree is a busy narrow road, and westbound cyclists might have to stop in the middle of the lane to wait to turn left from Greentree onto Grant, which is potentially dangerous.  Sonoma is another option, but it lacks a signalized crossing of Old Georgetown Rd.  It’s already a bike route and certainly better than Southwick, since Old Georgetown has a protected median at Sonoma.  But it’s hard to imagine a sign on the Bethesda Trolley Trail directing cyclists to leave the trail mid-block and cross to Sonoma.  Our goal is to provide a detour that can be signed.

By the way, here’s an artist’s rendition of the expansion site plan, highlighting the detour that uses the internal street.  Click to enlarge: 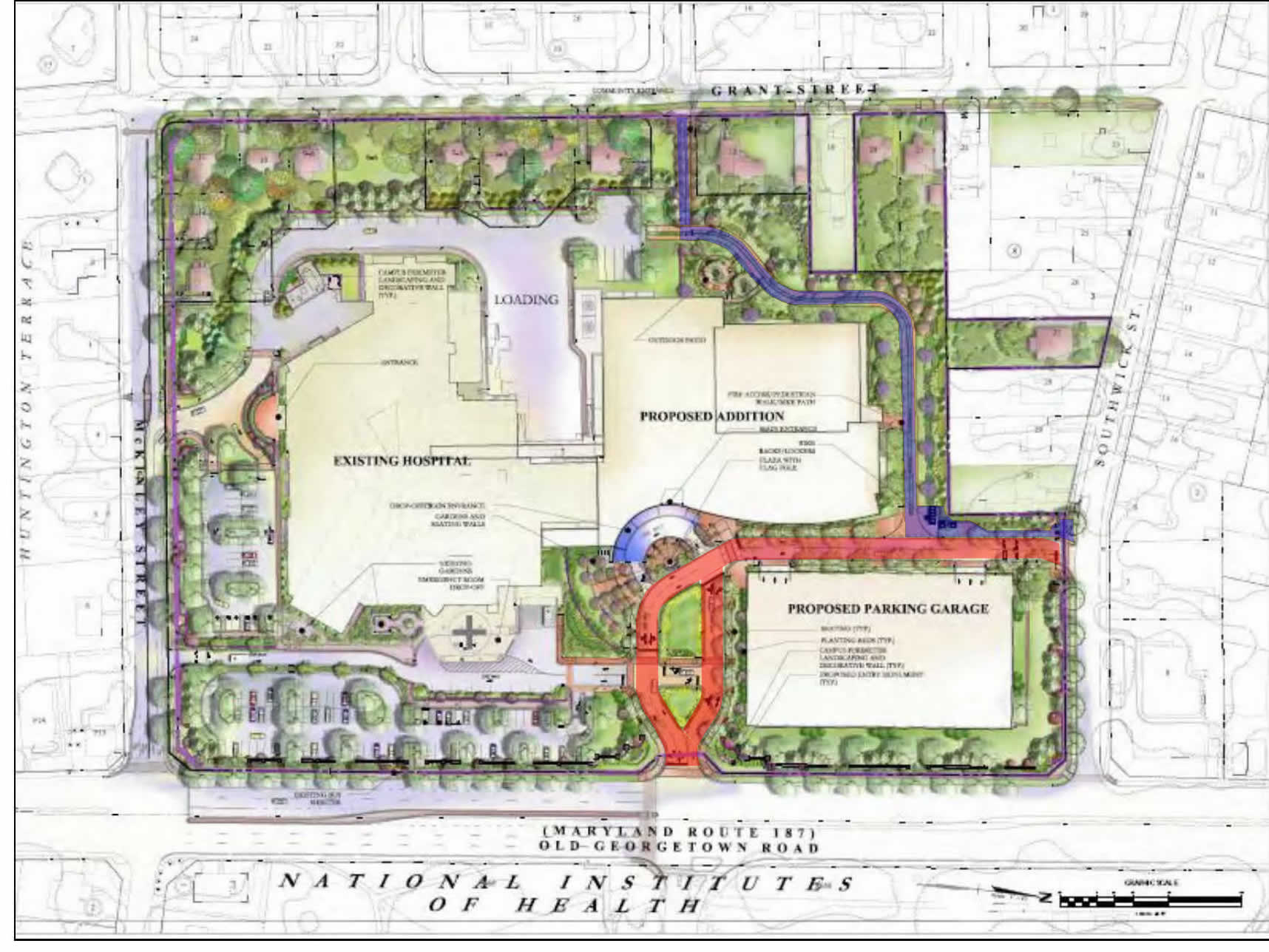 As soon as possible, Suburban Hospital should consider widening its sidewalks along Old Georgetown Road (north of the main entrance) and Southwick Street.  Narrow sidewalks have already being built, but trees haven’t yet been planted.   It may be best to add a new 8′-10′ path parallel to the new sidewalk rather than just widening the new sidewalk, as discussed above.  Of course in reality, neither the hospital nor the county will want to touch the site plan again.  As simple as it would be to widen a sidewalk, the legal issues associated with hospital expansion over the past few years mean changing plans would be difficult if not impossible.  It would be easier to rebuild a sidewalk that’s been in place for years (like the one in front of NIH across the street) than deviate from such a contended development plan.

An added wrinkle is that the Planning Department just approved the hospital’s signage plans, which didn’t include any bike route signs (though I asked the department to pursue signs over a year ago).

There is a Capital Bikeshare station on the west side of Old Georgetown Road just north of Southwick St., but it can’t be reached from the north, south or east without riding on the sidewalk.  Presumably the county’s intent was for many Bikeshare riders to cross Old Georgetown Road at Greentree Road to get to this station.  To do that, riders must use the narrow sidewalk on the west side of Old Georgetown between Greentree and Southwick.  So this block of sidewalk should be widened.  This would mean rebuilding an actual 120′ of sidewalk, presumably leaving the BikeShare station as-is.  There appears to be room to do this.  Here are some photos: 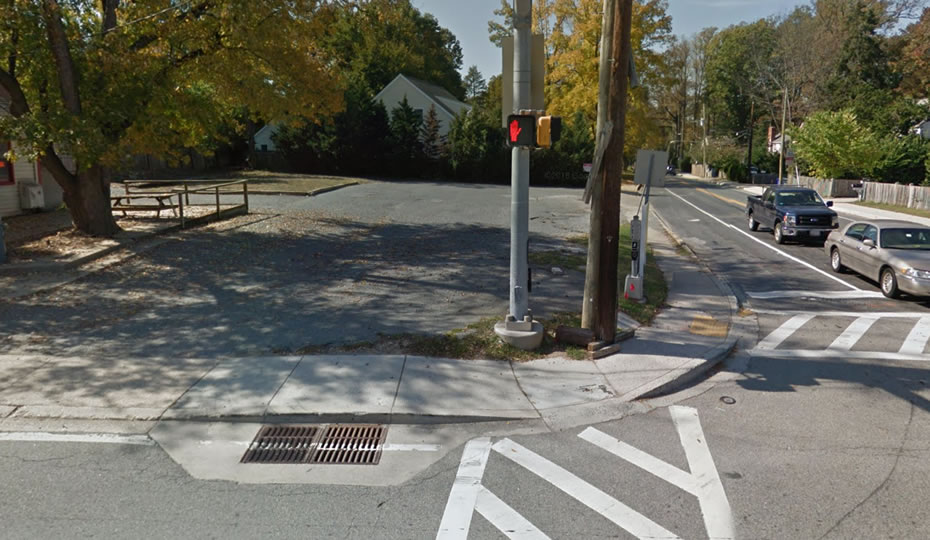 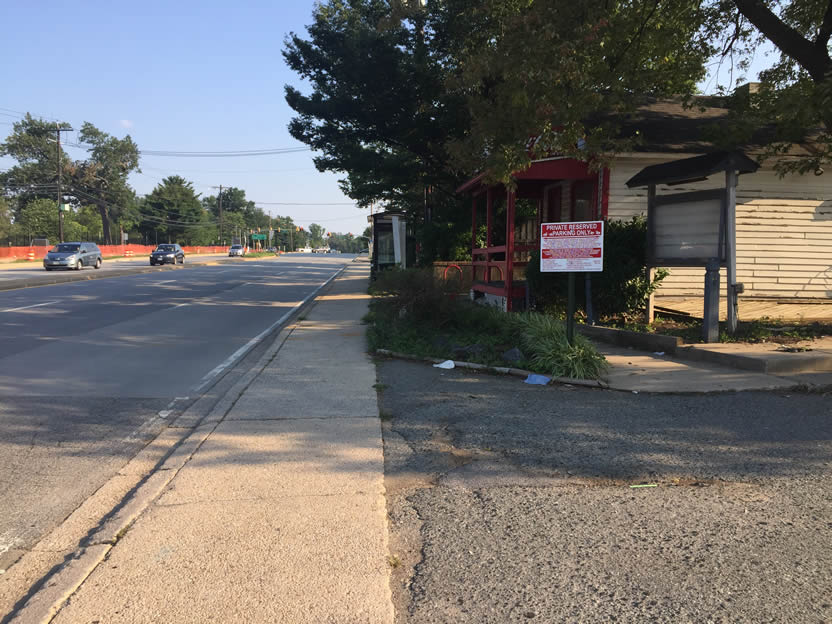 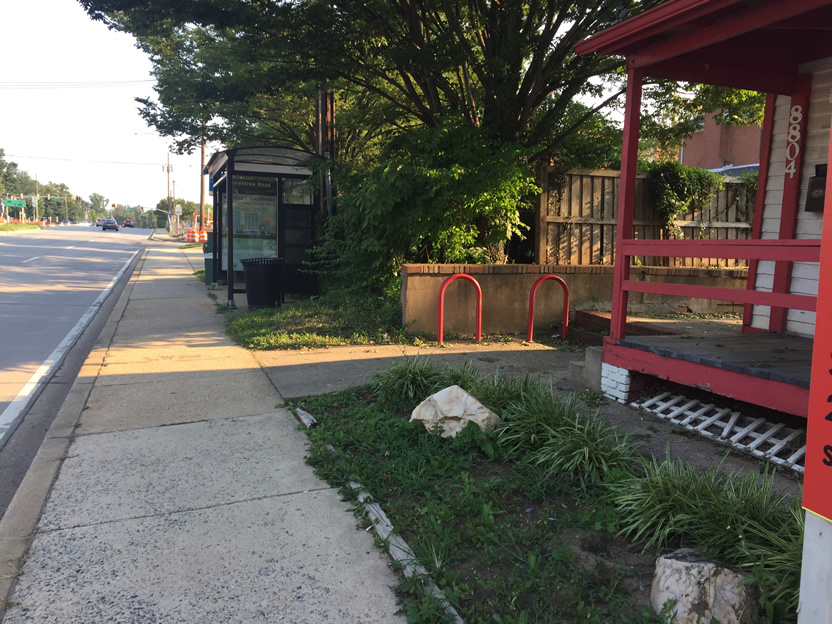 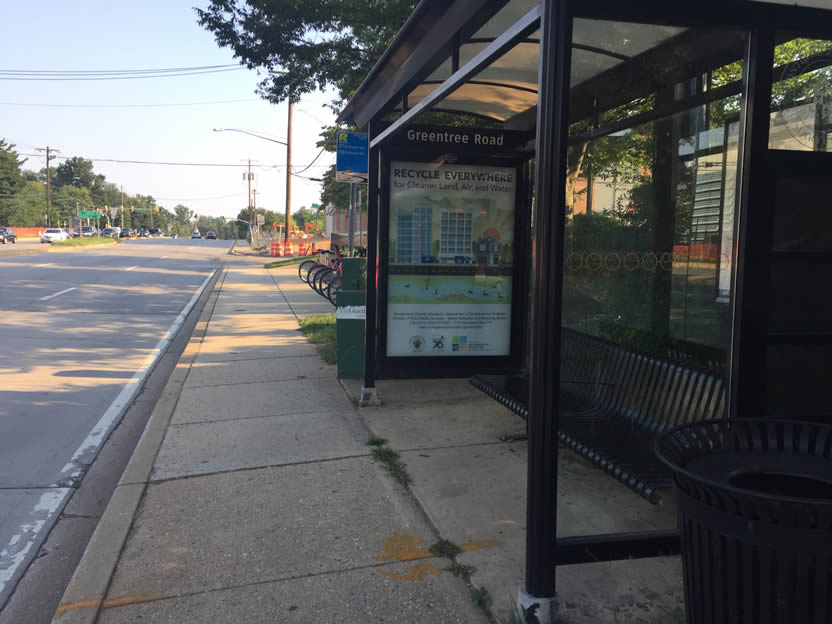 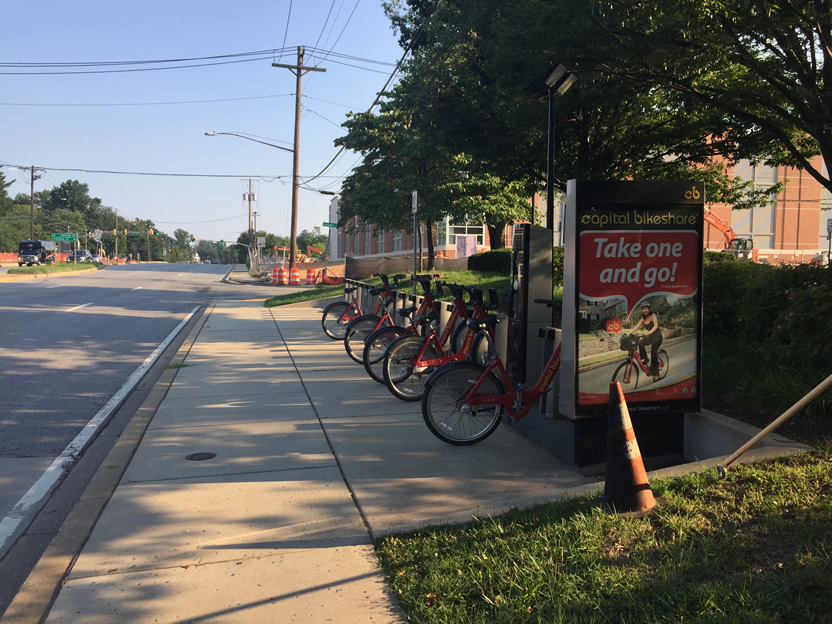 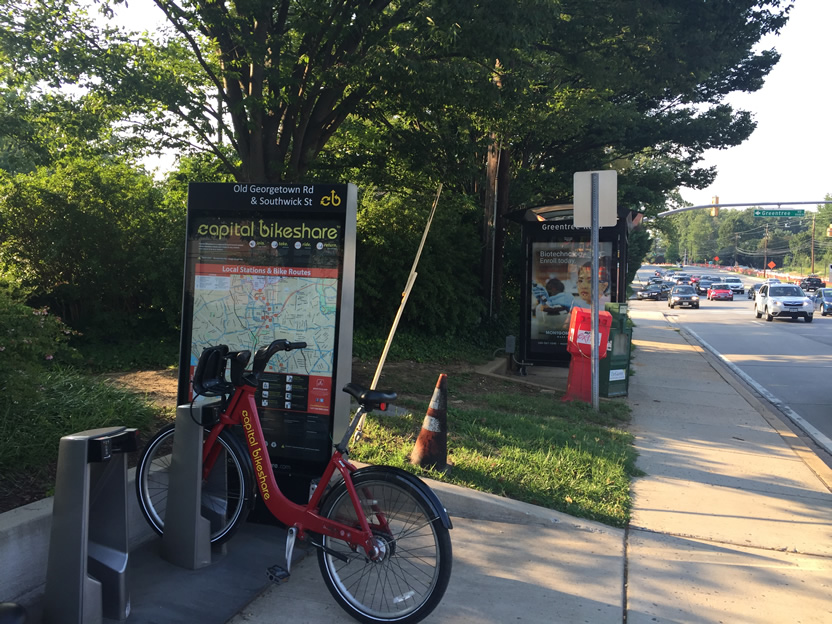 Widening this sidewalk segment could also provide another Lincoln detour option, but it’s not ideal for that given the proximity to the street and possible conflicts with the parking lot, bus stop, and Bikeshare station.  Such a detour would consist of Southwick, this segment of sidewalk, and the Greentree crossing of Old Georgetown.