Not long ago, there were no protected bike lanes (aka cycle tracks) in Montgomery County, but now there are three, with more are on the way.  As a result, county bikeway designers are faced with many decisions they never had to make before. How should PBLs be separated from the street?  How can cyclists make left turns?  And so on.

One question that I find especially important is this:

I’m referring to the green areas where a protected bike lane crosses a street or driveway.  There’s a growing push across the country for what I call the “floating bars” design, which resembles a ladder consisting only of rungs.  This is very similar to “continental” pedestrian crosswalks that are the new standard in Montgomery County.  The bike crossings are colored green (using thermoplastic paint in high-wear areas) whereas pedestrian crosswalks are white.  Here’s a protected bike lane crossing a driveway in Rockville: 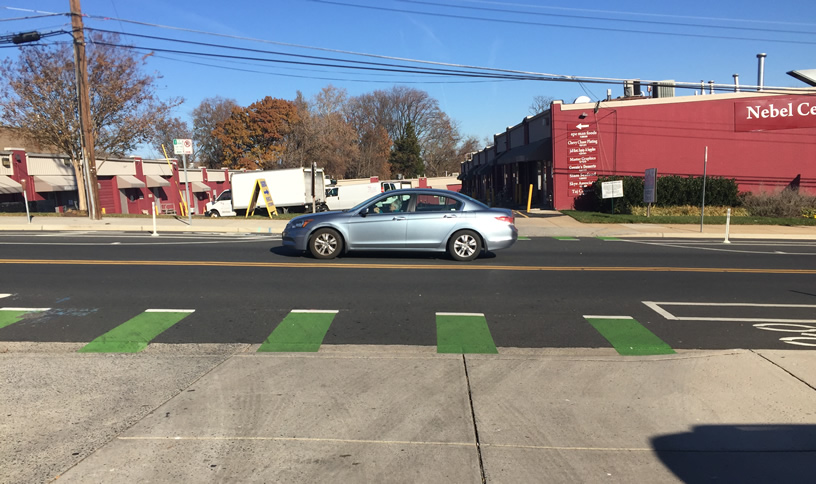 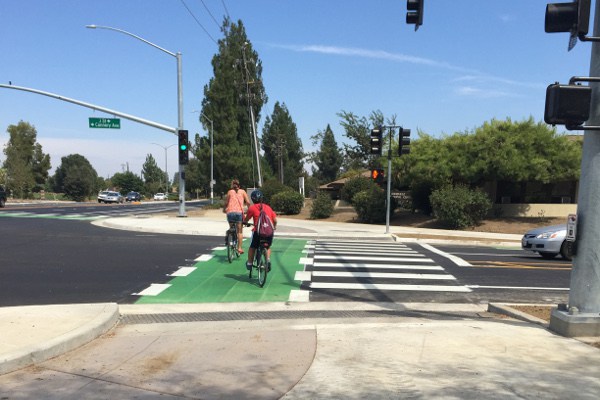 Montgomery County has decided to use the floating bar design for all new protected bike lane crossings.  But I believe solid painted designs are far superior in most contexts.

My first concern is that floating bars do not visually define or declare the crossing as well as a solid area does.  Solid crossings aren’t merely visible; they are bold and conspicuous.  A solid area literally resembles a path crossing the street.  So a solid area does a better job alerting drivers that they’re coming to a bikeway, and drivers who see it as a bikeway are more likely to look for rapidly approaching cyclists.  Drivers who see it as a bikeway are more likely to stop before the crossing rather than on top of it.  Drivers are often hesitant to stop on top of large painted areas in any case, based on my observations.  The edges of solid crossings are better defined, less “permeable” so to speak.  We all know that drivers don’t take barred crosswalks seriously enough, often pulling across them before stopping if they stop at all.

My second concern is this:  Intersections with protected bike lane crossings also typically have crosswalks, which can result in a virtual flotilla of floating bars.  All the bars can be difficult for drivers to decipher in a few seconds.  One barred crossing by itself might be easy enough to process, provided the bars aren’t too far apart.  But when there are lots of bars belonging to multiple bike and ped crossings, it gets hard to pick out one from another, like a herd of zebras.  The bike crossings might not form a simple square around the intersection like crosswalks do, but may form more complex arrangements, with some closer to the intersection, some further away, and some that don’t even reach the curb (ending at another crossing).  So it’s crucial to make each crossing as visually clear as possible.  Solid paint would go a long way towards helping drivers disentangle the bike crossings from each other and from the crosswalks.

This what the intersection of Nebel Street and Old Georgetown Road looks like to a driver:

To a driver turning left, the further green bars are hard to distinguish from the white bars, as seen below (look at the bars under the white SUV):

That’s a lot of bars!  And this is just a small intersection with a three-way stop.

Curiously, “Nebel” is the German word for “fog”.

Below is the Millennium Trail (a shared use path) where it crosses Henslowe Drive in Rockville.  The crossing is very clearly defined, with red pavement and white lines on each side.  The red pavement even has a stamped brick texture, adding to the effect.  Visually it looks like a path.

The effect is more striking when bright green paint is used, like on Woodglen Drive (where the protected bike lanes predate the county’s switch to floating bars):

This is further north on Woodglen Drive:

Compared to disconnected bars, this solid green crossing has more “weight”.  Drivers are more likely to interpret this as a bikeway, and less likely to turn across it without looking for bikes.  Compare that side by side with the Nebel mishmash:

Side by side comparison

If floating bars must be used for cost reasons, the bars should at least be close together.  But as the county builds more protected bike lanes, the bars seem to be getting further and further apart.  On Nebel St., some look like they’re 2′ apart, equal to the width of the bars themselves (similar to pedestrian crosswalk dimensions), but most of the crossings on Nebel appear to have a 3:2 gap to bar ratio (equivalent to 3′ gaps and 2′ bars) or a 2:1 ratio (equivalent to 4′ gaps and 2′ bars).  Here’s a view of Nebel showing what looks like a 2:1 ratio on one side of the street and 1:1 on the other side:

Bars in foreground are more widely spaced than bars in background

I didn’t actually measure the widths (I eyeballed it) but on some crossings the bars appear to be less than 2′ wide.  The distance between bars isn’t always constant from bar to bar, as if the road crews eyeballed it.  The actual width of the bars isn’t as important as the relative width — i.e. the ratio of gap width to bar width.  So I’ll cite ratios here.

In any case, the county is now adopting a 3:1 standard, equivalent to 6′ gaps between 2′ bars.  This can be seen in the newest protected bike lanes, on Spring Street in Silver Spring.  Here the bike crossing is barely noticeable compared to the crosswalk:

Spring St/First Ave. bike lane crossing where the gaps are three times as wide as the bars

This is really not enough to visually define the crossing.  But there’s more.  Some driveway crossings along the Spring St. bike lanes appear to have a 4:1 ratio, possibly 6′ gaps between 1.5′ bars.   This is the exit from the MNCCPC parking garage: 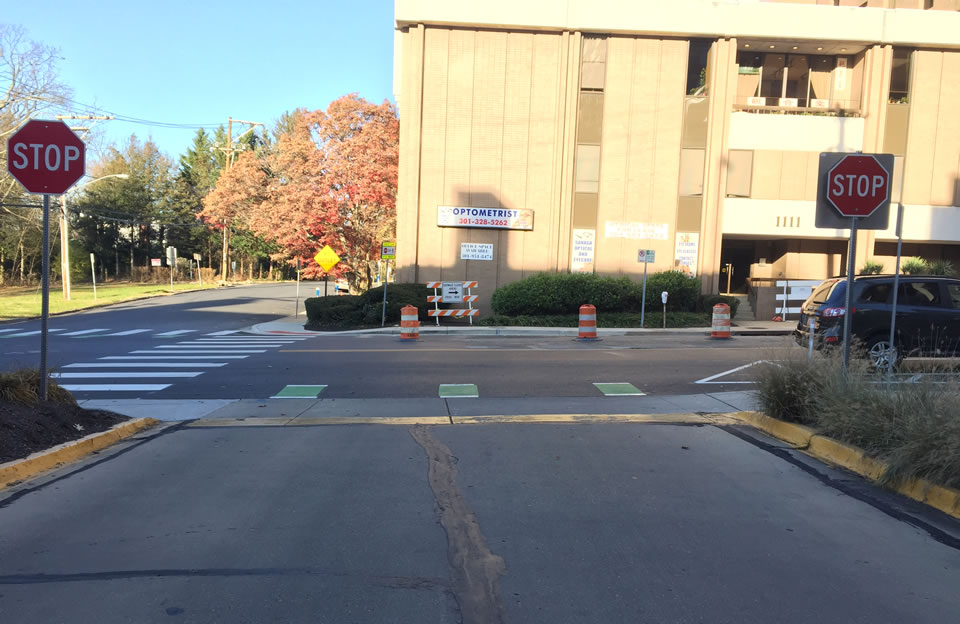 A lot of drivers exiting the garage will simply see three isolated green rectangles, not a bikeway crossing.  The bars are too far apart to define a line.  (Update Feb. 2018: Due to grit that’s accumulated in the crossing, one of these bars is very difficult to see at all).  Some commercial driveways on Spring are even worse, with just one bar in the path of drivers.

So if a floating bar design is to be used, the bars must be close together.  Spacing must be 1:1.  Spacing of 2:1 or higher completely ruins their effectiveness.

The county might also look at changing the bar style.  For example, more of each bar could be white – like one or two feet at each end, not just a few inches.  The white ends of the bars would almost resemble the parallel rows of squares in this Dutch example (but with green bars instead of a solid red background).  With less green paint per bar, the bars could be brought closer together without adding cost.  The crossing would look less like a crosswalk, but might be confusing in other ways, so I don’t know if that particular design would help.  But my point is that other designs should be explored.

There are perhaps three good arguments against solid painted crossings:

It’s not a problem for me, but I could see where some cyclists might not realize they’re crossing a street when the crossing is solid green without additional cues, especially if the non-crossing portion of the bike lane is also solid green.  But there are a variety of ways to let cyclists know they’re crossing a street, in particular dashed edge lines to markings alongside the crossing like these in Amsterdam,  Vancouver, and our own North Bethesda.  Stop signs can be used at some locations.  Another solution is the hybrid style of crossing I propose below.  Floating bars may still be appropriate in special contexts, like turn lane crossovers, where drivers might not be sure they can cross the bike lane, justifying a more “porous” appearance.

Differentiating solid bike crossings from other uses of solid green paint like bike boxes and queue boxes is an issue as well.  Some intersections use quite of bit of solid paint for these elements.  Of course these elements may be mistaken for crossings even when the real crossings use floating bars.  The problem is compounded by bike emblems in bike boxes showing a cyclist (or a little parade of cyclists) riding from right to left, suggesting it’s a perpendicular crossing.  Distinguishing between solid areas may come down to using special edge lines or the hybrid crossing style I propose below.  Such ergonomic issues have been studied and resolved in countries like Denmark, so solutions using solid paint are possible.

Cost is important of course.  I believe it’s the single biggest factor driving the push towards floating bar designs.  Some arguments for floating bars seem to be rationalizations in service of saving money.  Green thermoplastic paint is very expensive.  When the paint wears out, barred designs allow for easier replacement of just the worn sections. But at some point the savings do not justify putting cyclists at greater risk.  Why provide protected bike lanes at all if we skimp on the protection at intersections, where riders are already less protected?  There may however be ways to use somewhat less paint without impacting safety.

Note that European countries often mix the color into the pavement when the road is surfaced, which is something to consider here.

Here are the weaker arguments in favor of floating bar crossings, with my responses:

Where is the research?  Industry experts seem to defend one standard over the other without studies to back it up.  Yet in the Netherlands and Denmark, solid bike crossings are widely used, so in the absence of any research, it seems reasonable to do as they do.  This is in Copenhagen:

Here’s a video of an interesting Dutch roundabout.  Note the borders of the crossing areas:

To address concerns about both floating bars and solid crossings while saving paint, I propose what I call a hybrid crossing.  It’s neither solid nor striped, but rather consists of a pattern of smaller shapes, like a solid area with a visual (not physical) “texture”.  Some might call it a patterned crossing.  It would have the perceptual impact of solid paint but would clearly be distinguishable from areas that must be solid, like bike boxes.  It also wouldn’t be hard to pick out among pedestrian crosswalks.  A surprisingly solid feel can be achieved with just 25% paint coverage, equivalent to the 3:1 bar design (2′ bars and 6′ gaps).  Even better is 40% coverage, equivalent to 2′ bars with 3′ gaps.

Consider the following design, which has 50% paint coverage: 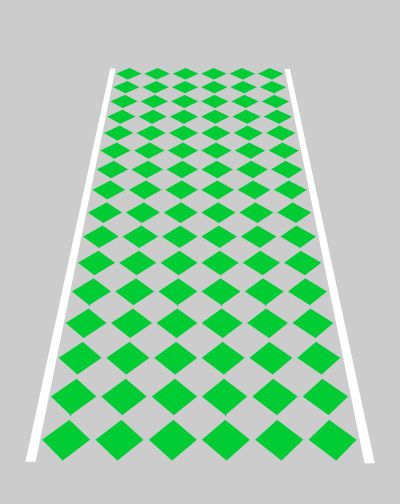 The following pattern has only 25% paint coverage: 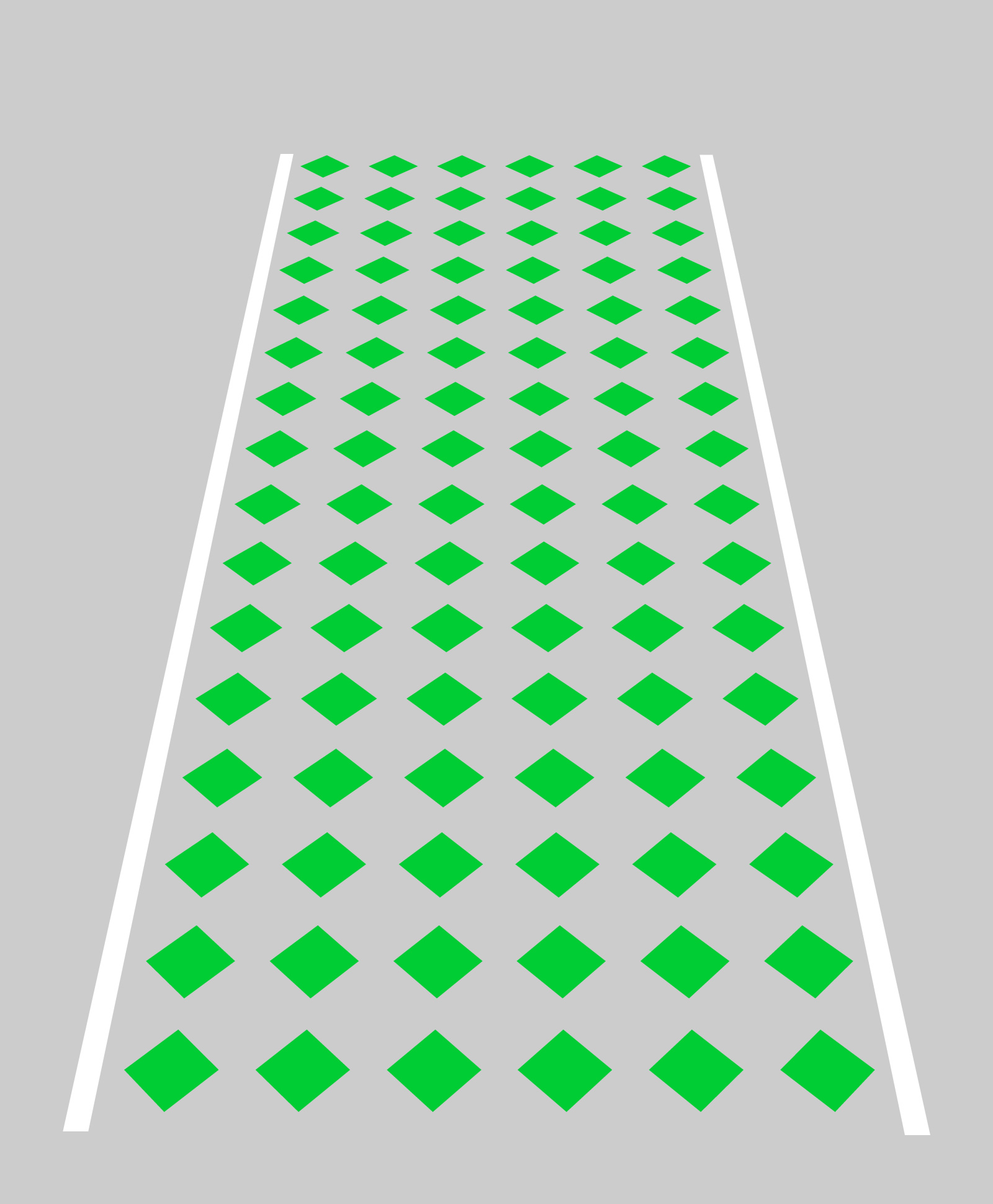 Possibly the rows of diamonds in the above design might look like stripes when viewed from a distance.  To fix that, the shapes could be staggered (25% coverage): 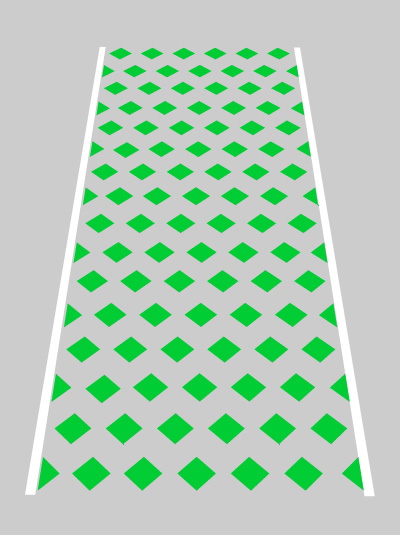 If it works better, the edge lines could be dashed instead of solid.

Below is a more complex design (I’m guessing 33% paint).  Feasibility may depend on how hard it is to paint these odd shapes: 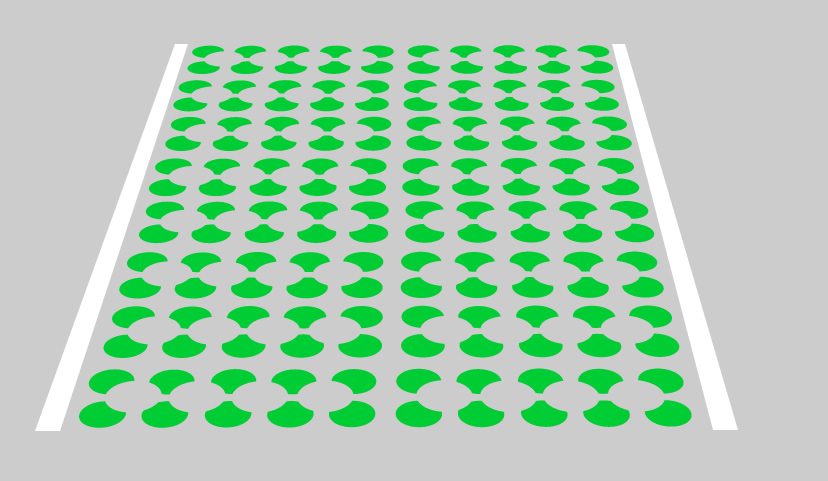 And of course there’s polka dots (50% coverage as shown): 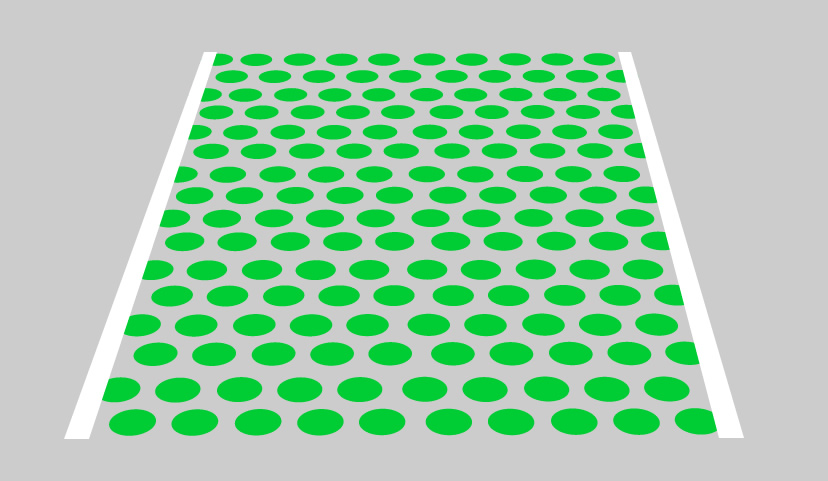 Some jurisdictions install artistic crosswalks that convey some local theme.  This might be popular in Maryland, with the added benefit of taking days to paint, keeping road crews fully employed: 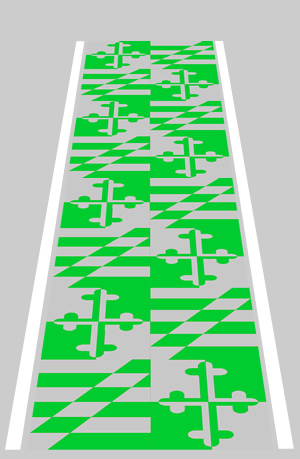 The national consensus on many PBL design issues is far from settled.  There is certainly room for local planners to experiment and improvise.  I think Montgomery County is in a good position to try innovative solutions like hybrid bike crossings.  National consensus seems to be coalescing prematurely around an inferior solution.  It only takes a few influential consulting firms to spread such a consensus across the country, creating an environment where cyclists pushing for alternative solutions at the local level face an uphill battle.  So the county should act now to try new things.